For decades, the big business lobby, ideologically globalist politicians, and economists have claimed that the only route to increasing the United States’ Gross Domestic Product (GDP) is through increasing legal immigration levels.

On Friday, thanks to President Trump’s “America First” economy, GDP soared to 4.1 percent for the second quarter of 2018, outpacing the first quarter, in which GDP was 2.2 percent.

While Trump was on the campaign trail throughout 2015 and 2016, he repeatedly said his economic nationalist agenda would bring the U.S. GDP to at least three percent.

Globalist politicians, business executives, and economists blasted his statements at the time, claiming the only way for the U.S. to increase GDP was through mass immigration and expanding legal immigration levels beyond the already more than 1.5 million mostly low-skilled legal immigrants that are admitted to the country every year.

In 2015, then-presidential candidate Jeb Bush claimed the U.S. would need to “dramatically expand” legal immigration to the country in order to obtain four percent GDP.

It seems to me we ought to be strategic about this about how do we create high, sustained economic growth And that is to shift away from family reunification being almost the sole driver of illegal immigration to narrowing that do what every other country has, spouse and minor children. And dramatically expanding immigrants that are coming to work. A  guest worker program to deal in the areas where there are shortages.

In 2012, when Sen. Marco Rubio (R-FL) was just about to release his now infamous “Gang of Eight” amnesty plan — that would have given amnesty to the majority of the 12 million illegal aliens living in the U.S. and would have increased legal immigration levels — he and then-CNBC host Larry Kudlow pushed the notion that the amnesty and mass immigration plan was necessary for economic growth.

RUBIO: I agree with that concept. And I think the fundamental obstruction that we face is not on the pro-growth side of immigration reform, I think that’s a majority position in America that we have to have a legal immigration system that allows us … to bring in a workforce when necessary.

During a panel discussion with a local chamber of commerce in 2013, House Speaker Paul Ryan said mass legal immigration through Rubio’s 2013 amnesty was necessary to fill the U.S. with workers and increase economic growth.

RYAN: And we believe in economic growth. And when we’ve got baby boomers retiring, when we’ve got 10,000 people retiring every day as they will be for 10 years coming, we’re going to need people. And when I look at this from just an economic standpoint, our birth rates are pretty [low] compared to our peers around the world, but they’re not where they need to be. Immigration will help improve that so that we have the labor we need to get the economic growth that we want so that America can be a fast-growing economy in the 21st Century. Immigration helps us get the labor force that we need so that we can have the kind of growth we want.

In 2013, CNN’s Fareed Zakaria dedicated an entire segment to pushing the idea that mass immigration through Rubio’s “Gang of Eight” amnesty is a “simple way” to grow GDP in the U.S.

The media outlet ProPublica, which is funded by left-wing billionaire George Soros, touted their research on immigration and GDP last year. The report claimed that the easiest route to achieving four percent GDP under Trump was by importing ten million foreign nationals every year, a drastic increase of legal immigration to the country.

ProPublica noted their immigration maximalism plan in a graphic: 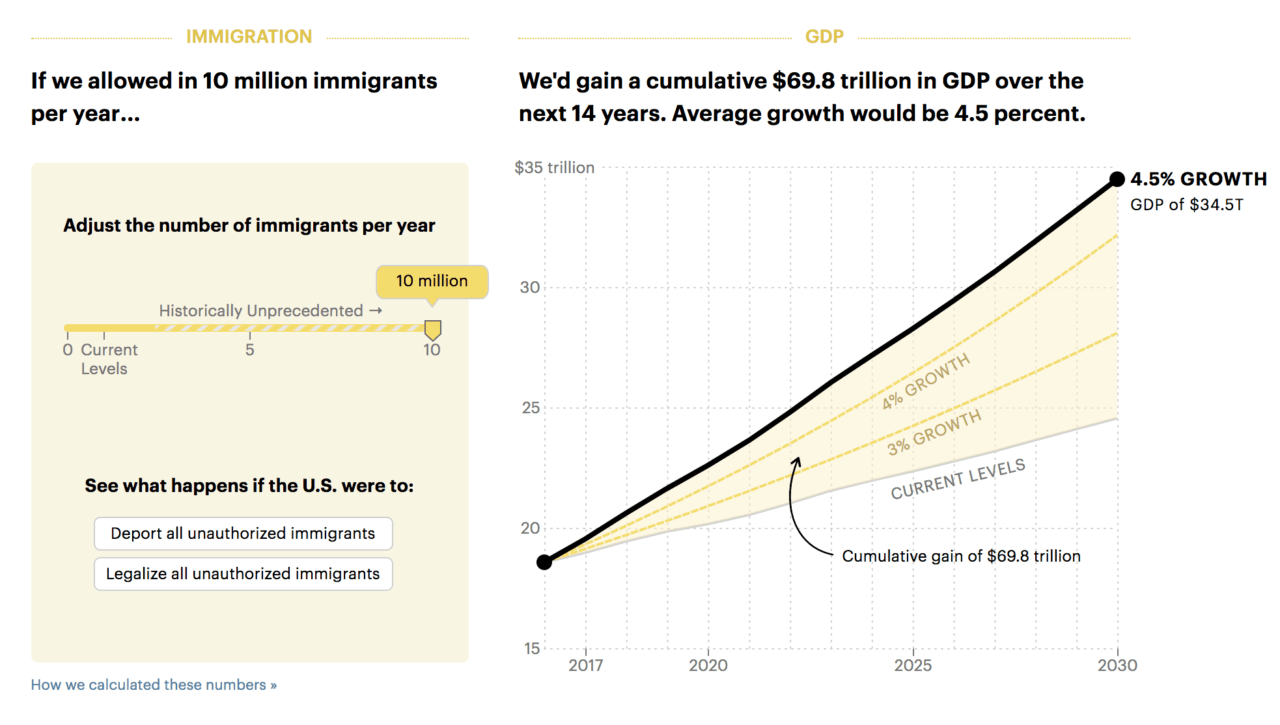 6. The Atlantic: ‘Simple Way’ to Increase GDP is through Mass Immigration

So, what’s the trick to raising GDP if productivity levels are subdued? More workers. [Emphasis added]

In its attempt to push Rubio’s mass immigration and mass amnesty “Gang of Eight” plan, the Wall Street Journal released a report in 2013 in which it claimed that “faster economic growth” would be achieved if the U.S. allowed more legal immigration.

Faster economic growth would in turn drive down the budget deficit over the next 10 years by at least $2.5 trillion. Think of it this way: A more generous and more skill-based immigration system would lower the budget deficit three times more than President Obama’s fiscal-cliff tax increase enacted in January. This is merely a single study and hardly the final word, but the conclusions confirm what many others have found. The most comprehensive modern study was completed by the National Research Council in 1997. It found a net positive, albeit small, economic benefit from immigration. [Emphasis added]

The executives of the Hoover Institute released a similar 2013 study pushing Rubio’s amnesty plan in which they claimed that increasing GDP could be accomplished, but only if the U.S. imported more H-1B foreign guest workers to take high-paying white collar U.S. jobs.

The Hoover Institute wrote at the time:

Initial estimates put the appropriations cost of the Senate Gang of Eight’s immigration bill (S. 744) at about $17 billion over ten years, leading at least a few politicians to cite cost as a potential reason to oppose its passage. But as Senator Rubio and others have pointed out, that cost does not include the economic benefits and tax revenue that would come from future immigrants. One group in particular, new H-1B visa workers, would add an estimated $456 billion to GDP and $113 billion to federal tax revenue over the next ten years. $244 billion of that increase in GDP would accrue to current US citizens and residents, with the rest going to the new H-1B workers. [Emphasis added]