Washington’s Cardinal Donald Wuerl announced his upcoming resignation Tuesday, saying he intends to travel to Rome to discuss with Pope Francis his departure from the archdiocese he currently leads.

“I intend, in the very near future, to go to Rome to meet with out Holy Father about the resignation I presented nearly three years ago,” Wuerl explained in a letter to the priests of the archdiocese.

The cardinal said that the decision to remove himself from his leadership role came as fruit of discernment regarding “the best course of action for me to pursue as we face new revelations of the extent of the horror of the clergy abuse of children and the failures in episcopal oversight.”

Wuerl had been implicated in a recent Pennsylvania grand jury report on clergy sexual abuse, which claimed that the cardinal had approved transfers for abusing priests instead of removing them from ministry. It also alleged that he concealed information when priests were reported to law enforcement and oversaw insufficient church investigations into abuse. 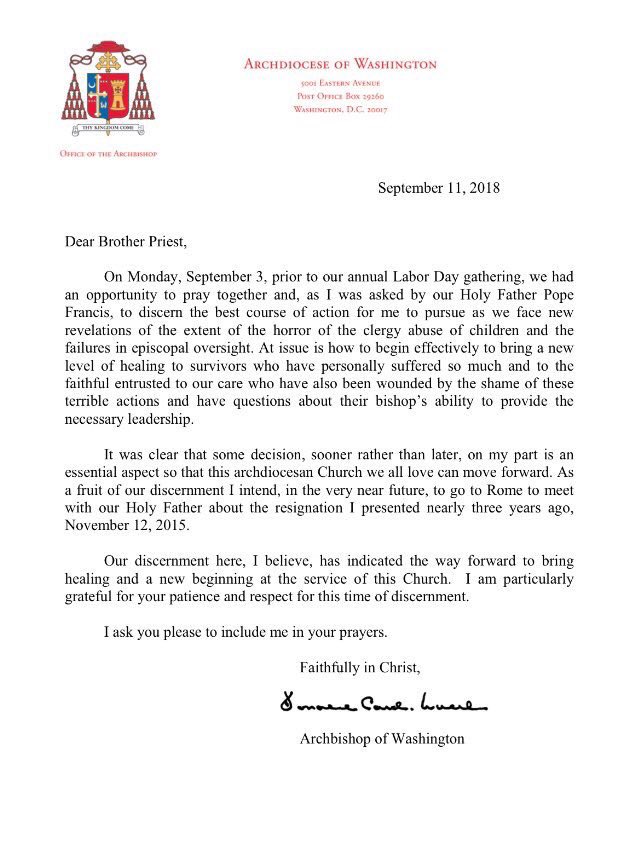 In late August, the diocese of Pittsburgh announced that the Cardinal Wuerl North Catholic High School would strip the cardinal’s name from its title following the report.

A week later, a petition urging Pope Francis to remove Cardinal Donald Wuerl from his position as archbishop of Washington, DC had garnered some 80,000 signatures.

The petition asked the pope to remove Wuerl from his position for allegedly covering up the sexual abuse of minors and paying off clergy to lie about their stories while serving as bishop of Pittsburgh.

“Cardinal Wuerl did not act with moral courage to remove predator priests from public ministry. Decades later, his failure to lead has scandalized the Church,” the petition states.

Viganò said that Cardinal Wuerl was “well aware of the continuous abuses committed by Cardinal McCarrick and the sanctions imposed on him by Pope Benedict” and yet ignored the sanctions and allowed McCarrick “to reside at a seminary in Washington D.C.”

“In doing so, he put other seminarians at risk,” Viganò stated.

In his report, Viganò attributed a number of important papal appointments in the United States—including those of Cardinals Blase Cupich in Chicago and Cardinal Joseph Tobin in Newark—to McCarrick’s influence over Pope Francis.