“This is good for our economy,” Benioff said in a Tuesday tweet that was applauded by Silicon Valley lobbyists. “We need to grow our workers to grow our economy.”

But Benioff’s cheap-labor importation plan would also shrink the income and careers sought by millions of American college graduates, many of whom will vote in 2020 for or against Trump.

I strongly support HR392 eliminating the per country visa cap. This bill must happen. The high skill visa provision has overwhelming bi-partisan support because this is good for our economy. We need to grow our workers to grow our economy. https://t.co/8DpVMqMUSJ

The planned giveaway is in a pending House bill, dubbed H.R. 392. It is also hidden in the House version of the 2019 funding package for the Department of Homeland Security. If Trump accepts that funding package, he will help companies import more cheap visa-workers from India and China an inflict more economic and career damage to the nation’s professional-status workforce of at least 55 million American college-graduates.

The nation’s workforce now includes roughly 1.5 million foreign college-graduate contract-workers who are imported via the H-1B, L-1, OPT, O-1, J-1, and other visa programs. These outsourcing workers are not immigrants, but instead, they are contract workers hired for one to six years, at lower wages, to take jobs that would otherwise go to American graduates.

GOP Reps. are still pushing Rep. Yoder's middle-class outsourcing bill to put 600K Indian visa-workers & families on fast-track to US jobs/voting. It would help CEOs import more Indians for US college-grad jobs – w/o any benefit for US workers or even GOP. https://t.co/LD8q3SjYRg

This massive level of middle-class outsourcing has suppressed the wage growth needed by many American graduates to repay their college debts, get married, buy homes, and raise children. For example, the salaries for 21 million “professional and business services” employees rose by just roughly one percent after inflation from the second quarter of 2017 to the second quarter of 2018, according to the Bureau of Labor Statistics. Their after-inflation pay was flat from 2o15 to 2016.

The Americans’ salary loss, however, would be a gain for the CEOs who see their profits rise and their stock options spike as middle-class salaries decline. 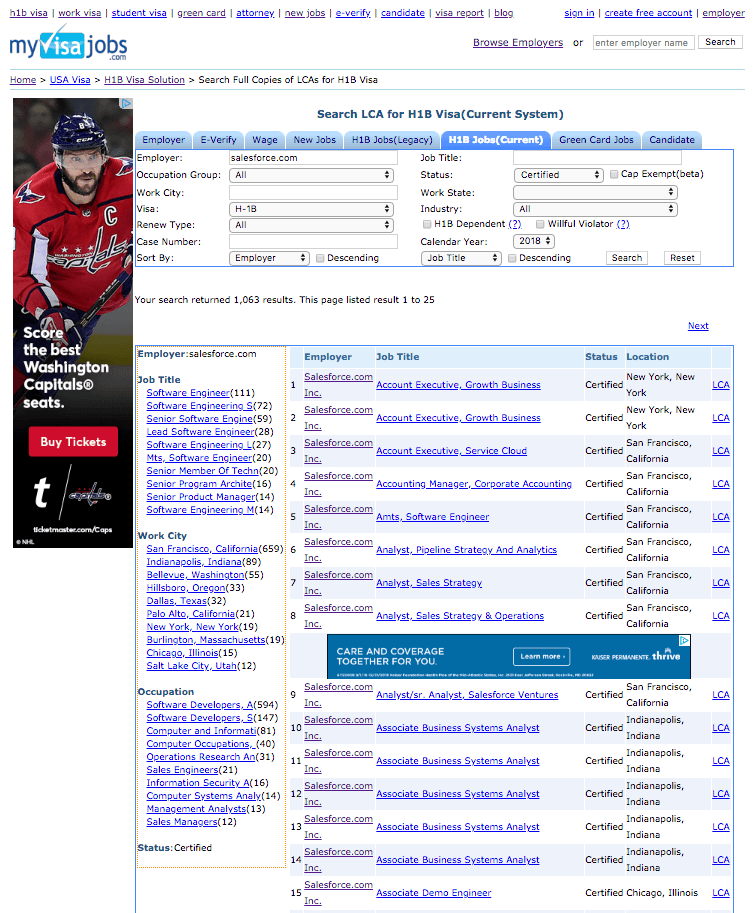 The company’s stock price has doubled since Trump’s election, but Benioff and most of his employees have strongly supported Democrats, including Hillary Clinton in the 2016 election. For example, only 5.2 percent of employee donations to candidates went to GOP candidates in 2018.

Now Benioff and his fellow executives as asking Trump to raise their stock portfolios by fast-tracking green cards to roughly 400,000 foreign contract-workers — plus 400,000 family members — who sidelined hundreds of thousands of American college graduates.

Benioff’s support for the visa workers was echoed by Todd Schulte, who is the director of a pro-migration lobbying group. The Democratic-aligned group, FWD.us, was formed and funded by Facebook’s Mark Zuckerberg, Microsoft’s Bill Gates and numerous other CEOs and investors who prefer to import visa-workers instead of hiring Americans.

This from @Benioff is really important. A really important fix to our immigration system that would help so many people stuck in the green card backlog because of discriminatory country caps. https://t.co/qaa8TZIG1B

Without irony, Schulte’s website declares that “We believe that when every person has the opportunity to achieve their full potential, our families, communities, and economy thrive.”

Amazon applauds @KevinYoder on the passage of his amendment to the @DHSgov appropriations bill, H.R. 392, that would remove the per-country limit on green cards. This is an important step towards green card reform, and Amazonians thank you for your leadership on this issue.

Business lobbyists are trying to minimize publicity about their demand for a green-card giveaway and they are pressing GOP leaders behind closed doors to keep the giveaway in the 2019 DHS budget.

But opposition is rising as Americans graduates have begun organizing to block the giveaway. For example, Protect US Workers helped defeat Rep. Kevin Yoder who used his authority as an appropriations chairman to insert the giveaway into the DHS budget.

Yep, I helped fund these billboards and voted straight RED in FL. Yoder's love for foreign guestworker/Replacemnts sent him packing. No American should ever have to train their Foreign Replacements@NeilMunroDC @bseeker @Dawnnewyorker pic.twitter.com/WOnwxr3seY

The American graduates are also using federal data to show U.S. legislators how many Americans’ middle-class jobs are being outsourced in their districts to the foreign workers.

Yep, been there, trained my foreign Replacements in '02. Awful experience. Went public with it, told Congress. The worst part was the disregard we got from our 2 Dem senators

The managing director of Thiel Capital, Eric Weinstein, tweeted to Benioff to highlight his report which shows that the federal officials created the H-1B visa program to lower salaries paid to American technology experts:

You know why we developed the H-1B visa Marc? It was to weaken American workers’ bargaining positions so much that they would be *forced* to mitigate their wage demands at your bargaining table. It’s a wage tampering program.

The mass outsourcing also adding pressure to the lives of many American technology workers, many of whom have already lost jobs to cheaper contract-workers. An informal survey of tech workers shows that almost four-in-ten say they are depressed.

One of the leading advocates for the green-card giveaway is Leon Fresco, an immigration lawyer who helped Democratic Sen. Chuck Schumer pass the disastrous 2013 “Gang of Eight” amnesty through the Senate. The bill was so unpopular that the GOP gained nine Senate seats in 2014, preventing Schumer from becoming Senate Majority Leader.

On December 6, Fresco suggested there is only a small chance that the giveaway will get into the final DHS bill:

Many Indian contract workers are lobbying to help pass the green-card bill:

Thank you @Benioff for your leadership on ensuring fairness by the removal of national origin discrimination on Employment Based Green Cards #HR392 #S281 https://t.co/PVDcb5ByJZ

In the United States, the establishment’s economic policy of using migration to boost economic growth shifts wealth from young people towards older people by flooding the market with cheap white collar and blue collar foreign labor. That flood of outside labor spikes profits and Wall Street values by cutting salaries for manual and skilled labor that blue collar and white collar employees offer.

Immigration also pulls investment and wealth away from heartland states because coastal investors can more easily hire and supervise the large immigrant populations who prefer to live in the coastal states.