Amazon’s Hunger Games: Symptom, Not Cause

The reviews of Amazon’s “Headquarters 2” search are in, and they’re scathing. As they should be.

You probably know about the HQ2 operation, launched with great fanfare last year by the tech giant, leading hundreds of localities across the country on a wild goose chase, only to see New York City and a close-in suburb of Washington, D.C., emerge as the victors.

In fact, when it turned out that Amazon had chosen two cities where CEO Jeff Bezos already owned ultra-ritzy homes, it was obvious that the whole “search” was fake news.

And so the media backlash set in. Wired derided the spectacle as “Amazon’s Hunger Games.”  The New York Post’s headline blared “Amazon’s HQ2 competition was a cruel bait-and-switch.”  And The Wall Street Journal headlined, “How Amazon Picked HQ2 and Jilted 236 Cities.” Or as Politico bannered, “Amazon’s enemies swarm as its D.C. clout swells.”

To be sure, Amazon’s “search” had its journalistic champions. The Washington Post, to name one, cheerleadingly described Amazon as a “winner.”  Of course, Bezos owns the Post, so it’s no shock that his pet paper was on board with his program.

More typical was the reaction of Bloomberg’s Shira Ovide: “Amazon may have outsmarted itself.”  She added, “Amazon’s municipal beauty pageant may have been wise a year ago, when there was a bit less skepticism about Amazon and rich tech companies in general.” Yet now that we all realized that we’ve been Facebooked, as well as Googled, good and hard, well, the public mood is less forgiving toward corporate manipulations.   Remarkably, just for this once, Fox News’ Tucker Carlson found himself in the same camp as the larger journo herd when he ripped HQ2 as a showcasing of “merciless corporate power.” 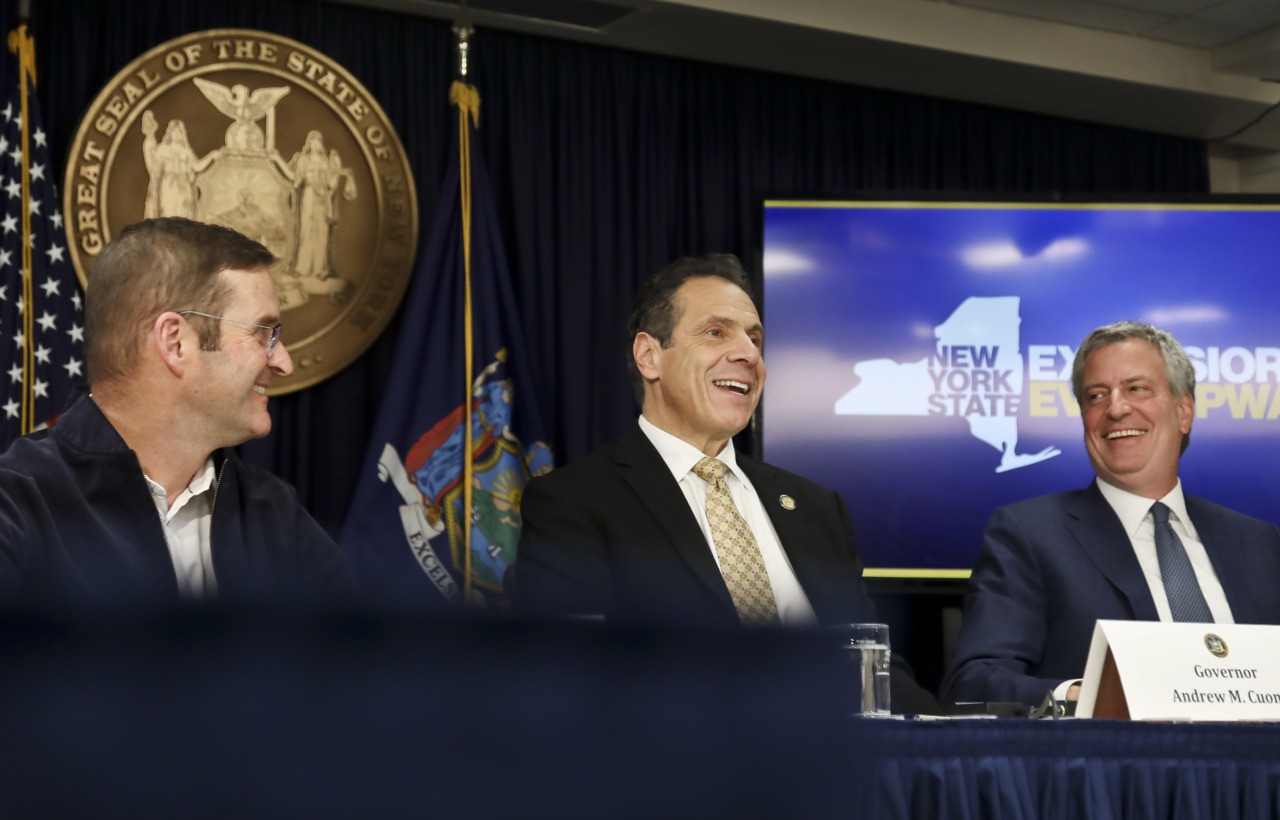 Indeed, HQ2 caused many reporters to reflect on Amazon’s role in widening the gap between the haves and have-nots; that is, the increasing distance between tech and the rest.  As Annie Lowrey wrote for The Atlantic, “Amazon was never going to choose Detroit.” She added, “Winners are taking all in this economy, with places like Washington and New York only becoming more important and more powerful.”

Or as The New York Times asked in its headline, “The Biggest, Richest Cities Won Amazon, and Everything Else. What Now for the Rest?”  Reporter Neil Irwin explained, “We’re living in a world where a small number of superstar companies choose to locate in a handful of superstar cities where they have the best chance of recruiting superstar employees.”  Even The “Bezos” Post had to admit, “Amazon’s selection of the D.C. and New York regions is the latest example of prosperous, talent-rich, highly educated coastal cities winning corporate deals to the detriment of mid-tier and smaller cities.”

So as we look back at this sorry saga, about the best that can be said for Amazon is that it was merely surfing the trend; that is, it was doing what all the other tech (and finance) companies have been doing, namely, clustering in a few global-oriented urban nodes, all the while ignoring the rest of America.

This concentration of wealth in the biggest and most connected cities has been going on for a long while. Last year, The Wall Street Journal detailed the ongoing urban engorgement in a series of charts—one showing, for example, that per capita personal wealth in urban areas is more than triple that in rural areas.

The enrichment of the Democrats was even more pronounced in the voting this year: In First Things, Williams College political scientist Darel E. Paul points out that of the 66 richest Congressional districts in the country, the Democrats now control 56 of them.

Thus it’s no surprise that in the richest city of them all, New York, the Republicans have been wiped out.  The last Republican Congressman representing any part of the Big Apple was defeated this year; in the upcoming 116th Congress, its House delegation will be 11:0 Blue.

So perhaps it’s also not a surprise that an increasing number of Democratic-leaning “thought leaders” are actively celebrating the twinned trends of enrichment and “embluement.”  To name one such nest of “thought-leaders,” the Brookings Institution has taken to cranking out studies asserting that Democratic areas are worth more, and thus are better, than Republican areas. Back on November 29, 2016, Brookings proclaimed, “Another Clinton-Trump divide: High-output America vs low-output America.”  The  numbers might be accurate, but it’s also accurate to say that Brookings was putting forth a weirdly monetized vision of civic worth and citizenship. 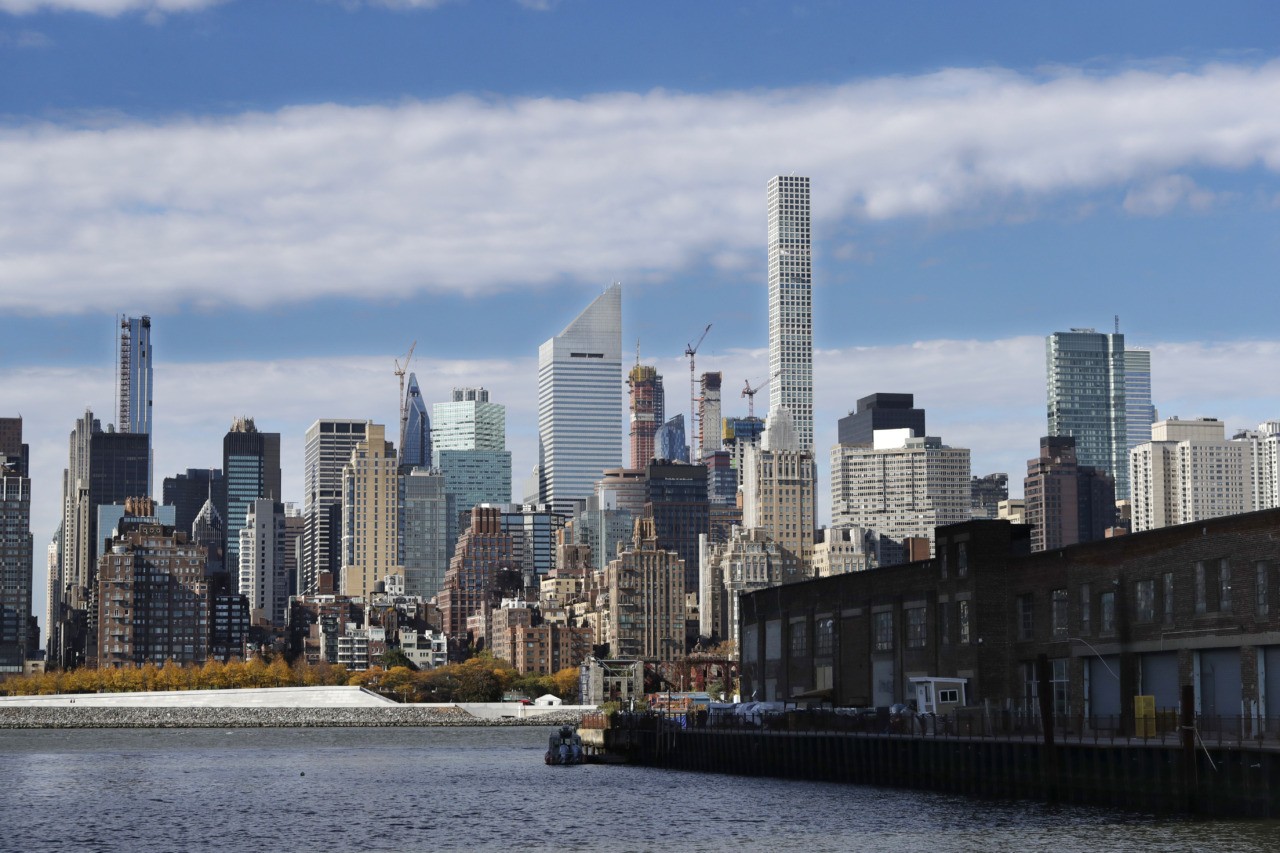 The Queens borough of New York with the Manhattan skyline is in the background. The New York location of Amazon’s HQ2 will be in the Long Island City neighborhood of Queens. (AP Photo/Mark Lennihan)

Not self-satisfied enough with its 2016 findings, Brookings has updated them for this year.  It calculates that the areas just won by the Democrats account for 60.9 percent of the nation’s economic output.  “Democratic districts are more productive,” the report says smugly, “with a strong orientation to the advanced industries that inordinately determine prosperity.”

(As an aside, one purpose of this study—beyond self-congratulation—is to chip away at the rationale for the U.S. Senate, controlled, of course by Republicans. As the report continues with its sneering tone, the 21 states with two GOP Senators account for “just 30.3 percent of the nation’s output.”  The message is clear: Rich Democrats shouldn’t have to tolerate poor Republicans controlling anything.)

The Brookings document concluded, “The question is whether a nation that fails to support the needs of its core, high-value economy can truly thrive.” Translation: Give the rich what they want—or else.  So we can step back and marvel: It’s hard to imagine the one percent, or the ten percent, getting a stronger pat-on-the-back than this: We (blue-state Democrats) are the champions, no time for (red-state) losers.

So What Is To Be Done About Amazonification?

Republicans had better figure out an effective response—and right quick. After all, in the 2018 midterms, the GOP not only lost at least 38 seats in the House, but also lost the nationwide popular vote  by almost eight points.  The Elephant Party can’t afford many more “victories” such as that.

So Republicans might begin by considering where they are strong—and where they are weak. Here, journalist Sean Trende—the political sage who put his finger on the proto-Trump vote back in 2012—can be helpful; as he observed in a November 15 tweet, “Southern suburbs are starting to vote like Northern suburbs” and “Northern rurals/small towns [are] starting to look a lot like Southern rurals/small towns.”

This new phenomenon was evident in Texas, where two-thirds of the statewide vote comes from three metroplexes, Dallas, Houston, and San Antonio—and they’re all moving, fast, toward the Democrats.

As Reid Wilson observed in The Hill, “Democrats won the straight-ticket vote in Dallas County by one point in 2002, by seven points in 2006 and 2010, by ten points in 2014—and by 30 points this year.” And so that’s why Texas is starting to look a bit purple; this year, liberal Beto O’Rourke swept the urban areas, thereby coming within three points of Sen. Ted Cruz; Cruz was saved only by a big rural vote.

So if the cities, and now the suburbs, are increasingly Democratic, leaving Republicans dominant only in small towns and rural areas, perhaps the solution is to beef up those small-town and rural populations.  To cite just one of many key considerations supporting rural Republicanism, folks in the boonies are a lot more likely to oppose gun control; they know all about varmints—four-legged, as well as two-legged.

Okay, so now we come to the obvious question: How to actually accomplish this population beefing-up? And the answer is equally obvious: Economic Development.

At their wisest and shrewdest, Republicans have always understood the importance of widespread economic development, as a crucial tool of party-building as well as of nation-building. That’s why, in 1862, in the middle of the Civil War, President Abraham Lincoln signed into law four remarkable pieces of legislation, the impact of which would reach far beyond the war: first, the Homestead Act, which provided for the empowerment of independent family farms; second, the Pacific Railroad Act, which put the Transcontinental Railroad in motion, thereby connecting farmers to markets, as well as connecting the country overall; third, the Morrill Act, establishing public land-grant colleges, so the children of the soil could learn, too; and fourth, the creation of the U.S. Department of Agriculture, intended to be a permanent champion not just of farms, but of rural development of all kinds.

So we can see: national economic development is not a new idea. In fact, the basic vision of building infrastructure and other tools for growth and flourishing has been around for a long time; it just so happens that the Lincoln Republicans did a notably great job of it in the 1860s—and that’s a big reason why they dominated American politics into the 1930s.

So today, what policies represent the logical updating of Lincolnism? We can think about that question by recalling what Lincoln himself said: “The legitimate object of government, is to do for a community of people, whatever they need to have done, but can not do, at all, or can not, so well do, for themselves—in their separate, and individual capacities.”

With that mental template in mind, it’s easy to think of policies that Lincoln, were he alive today, would have spearheaded. Most obviously, he’d start with a viable vision of individual land ownership—that is, a straight-out updating of his Homestead Act. It’s crazy that the federal government owns so much land, especially in the West–89 percent of Alaska, 80 percent of Nevada, etc. And for what public purpose?  Surely, none more important than providing people with a chance, as in the 1953 Western film Shane, “To be strong and straight.”  Indeed, from a political point of view, it’s hard to think of a more potent message than “Free Land!”

Yet of course, most of the unused land in the West can only have value to people if it is provided with infrastructure, from roads to water to broadband. And yes, it has to be protected against fire.

So these challenges should be viewed, at least by Republicans, as opportunities. Opportunities, that is, to entice people into rural life—to own land, to own guns, to oppose new fuel taxes—and to vote Republican. (And at the same time, we can see why Democrats aren’t so keen on rural development—after all, they have spotted owls to worry about.)

Moreover, history tells us that rural development, including infrastructure projects, pays for itself. It’s impossible to imagine we would have seen even a fraction of the economic growth in the Southwest, for example, were it not for Hoover Dam—or in the South, without the Tennessee Valley Authority.  Speaking of the TVA,  economists David Neumark and Helen Simpson argued in 2015 that “place-based” economic initiatives, such as the TVA, are the most valuable approach to development—more effective, even, than tax cuts.  As they say, If you build it, they will come. 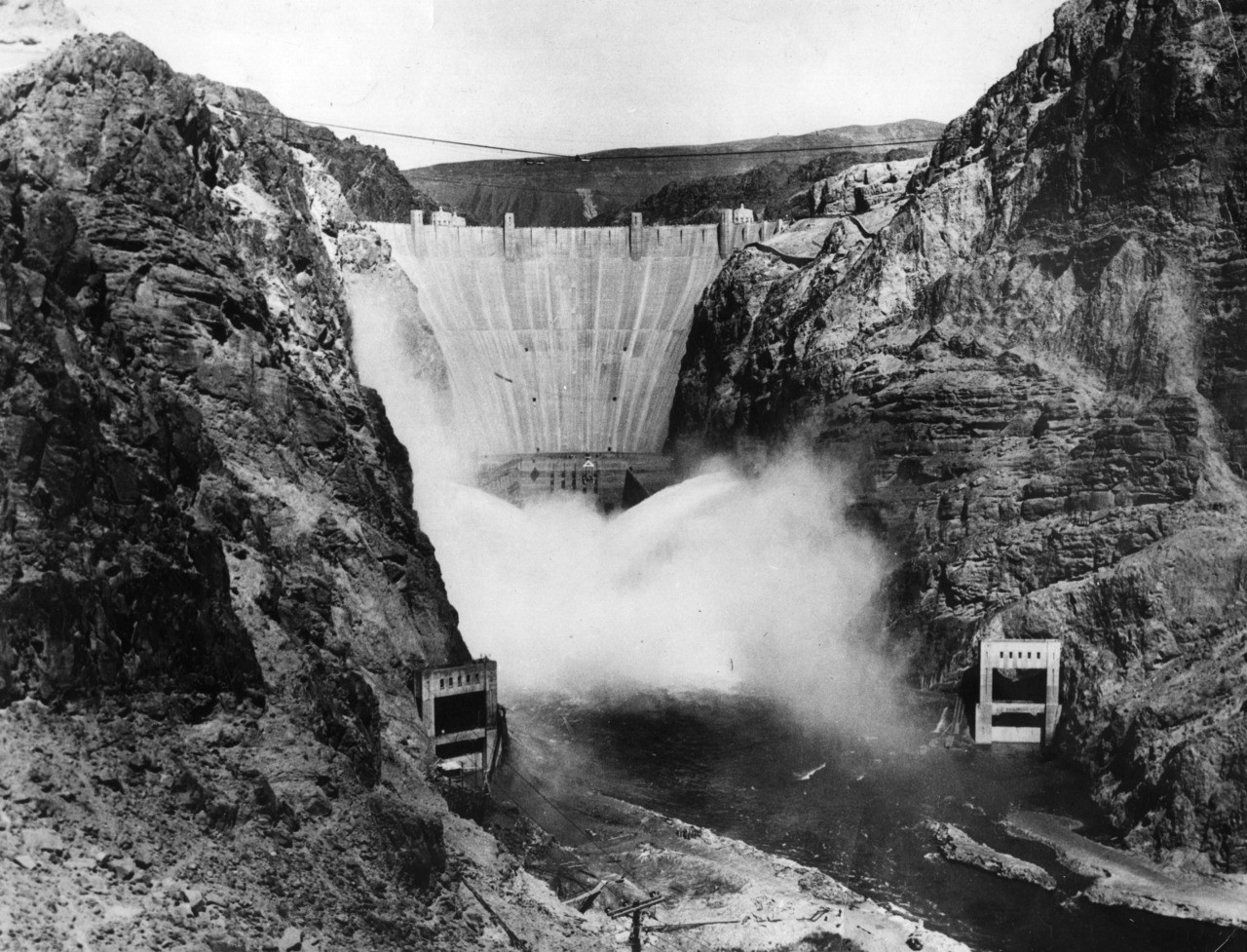 Hoover Dam on the Arizona/Nevada border. Work on it commenced in 1931 to harness water from the Colorado River for use in power generation. (Keystone/Getty Images)

We could go even further, thinking about the economic and political value of new drilling and new mining.  And if need be, we could envision a plan for carbon capture, both to secure fossil fuels, as well as to create yet another whole industry in rural America.  Why, if we wanted to, we could desalinate ocean water, so that the West could be as verdant and fruitful as the East.

Yes, all that building and developing in underpopulated areas would add up to a pro-growth, pro-Republican vision of rural renaissance.

Or Republicans could do nothing, and watch helplessly as the Democrats build their Imperial Cities, ever more Imperial.