France’s Gilets Jaunes protestors have jumped on the Trump train with a manifesto that could almost have been written by the Donald himself.

The good news is that it contains an awful lot of sense – including demands for lower taxes, reduced migration and Frexit (French exit) from the European Union.

The bad news is that it hasn’t a prayer of coming to fruition because its demands are unrealistic, contradictory and will certainly be stymied by the sclerotic, anti-democratic, rampantly statist French political system – and also by the French people themselves. 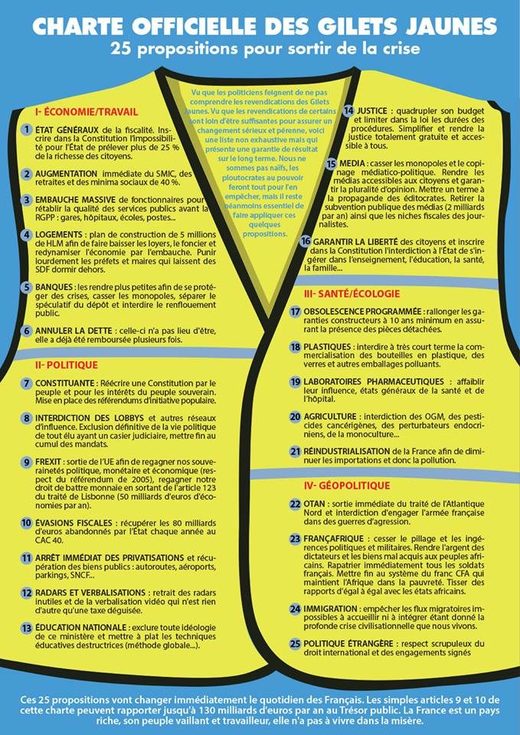 Though the original, ostensible purpose of the Gilets Jaunes demonstrations was to protest against President Macron’s carbon tax policies, what’s clear from this manifesto is that their demands are now much broader.

The demands are summarised in English here:

Rather like the coalition government in Italy between the Five Star Movement and the League, the manifesto represents a mix of left-wing and right-wing ideas.

On the one hand it demands lower taxes; on the other higher government spending. These are not necessarily contradictory – as the Laffer Curve tells us, a lower tax rate can lead to higher overall revenues for the government to spend. But they are a very big ask in a country which, since the 1970s, has been stuck with a socialistic, corporatist, statist economic model in which a massive welfare state is precariously propped up by high taxation,  huge public debt and special government favours for giant corporate interests. A country, also, where any form of drastic political change is greeted with the kind of protests we have been witnessing all over France in the last few weeks.

In order for such policies to be successfully implemented, it would a) require a leader of President Trump’s charisma, determination and business nous and b) the French to stop behaving like French people and to realise that their economy is never going to be rescued from oblivion so long as they carry on down the route of over-mighty trade unions resisting any change, unaffordable welfare, and massive constraints on private enterprise through labour laws and high taxes.

Achieving a) is highly unlikely. About the closest they’ve got Marine Le Pen, who is far too much a believer in big government to effect a Trump-style economic revolution.

Achieving b) is impossible.

These Gilets Jaunes protests are going to run and run because about the only uniting factor they have in common is a burning hatred of the status quo. Too many of the protestors want too many different things – and far too quickly. There is simply no way, even if he had the inclination, that President Macron could come even close to meeting their demands. And even if he did meet their demands, it’s still quite likely that half the protestors would go unsatisfied: after all, we have no idea how representative of the Gilets Jaunes this manifesto really is.

As Trump himself has provocatively hinted, with the right leadership France could Make France Great Again.

The Paris Agreement isn’t working out so well for Paris. Protests and riots all over France. People do not want to pay large sums of money, much to third world countries (that are questionably run), in order to maybe protect the environment. Chanting “We Want Trump!” Love France.