President Donald Trump made a surprise trip to Iraq on Wednesday to visit the troops over Christmas, praising them for fighting terrorism.

The president spoke to about 100 special operations troops who were engaged in combat with the Islamic State in both Iraq and Syria.

“If we see something happening with ISIS that we don’t like, we can hit them so fast and so hard they really won’t know what the hell happened,” he said to White House reporters who traveled with him.”We’ve knocked them out. We’ve knocked them silly.”

This is the first time that President Trump has visited troops in a war zone since becoming president, as he traveled secretly to the Al Asad air base in Iraq.

First Lady Melania Trump also joined the president for his visit and spent time with the president who took selfies with several of the soldiers and signed red Make America Great Again hats.

One soldier told the president that he went back into the military after he was elected president.

“He came back into the military because of me,” Trump said to reporters. He turned back to the soldier and replied, “I am here because of you.” 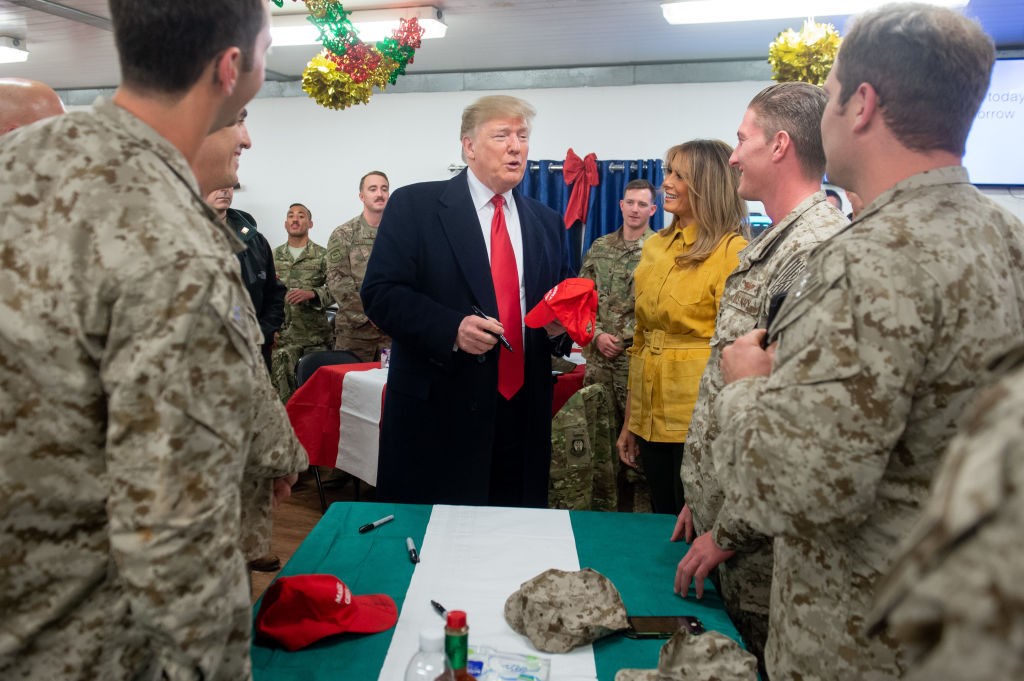 US President Donald Trump and First Lady Melania Trump greet members of the US military during an unannounced trip to Al Asad Air Base in Iraq on December 26, 2018.  (Photo SAUL LOEB/AFP/Getty Images)

The president also visited with military commanders on base.

He also defended his decision to withdraw troops from Syria in a discussion with the media who traveled with him.

The United States still has over 5,000 troops in Iraq to help combat the Islamic State. The president publicly opposed former President George W. Bush’s decision to send troops to invade Iraq in 2003 but appeared eager to visit to visit the troops.

“It’s a place I have been talking about for many years, many many years,” Trump said. “I was talking about it as a civilian. ”
But Trump indicated he would continue to be apprehensive about military actions in the future.

“It’s time for us to start using our head. We don’t want to be taken advantage of anymore,” he said.

The president marveled at the amount of security it took to get on base, despite spending trillions in the Middle East to make it safer.

“Pretty sad when you spend 7 trillion dollars in the Middle East and going in has to be under this massive cover with planes all over and all of the greatest equipment in the world and you do everything to get in safely,” he said.

He said that he was concerned for the safety of the first lady and for the presidency.