Buzzfeednews.com on Friday evening led with a report on Democrat lawmakers pledging to investigate President Donald Trump over its report claiming the president directed Michael Cohen, his former personal attorney, to make false statements to Congress — hours after the office of special counsel Robert Mueller denied the story’s veracity, describing it as “not accurate.”

The report —”Lawmakers Vow To Investigate Trump After Bombshell Report” — written by BuzzFeed politics reporter Emma Loop — is a roundup of reactions from top Democrats to the news organization’s report, citing two unidentified law enforcement officials, alleging the president asked Cohen to lie to lawmakers about a proposal to build a Trump tower in the Russian capital of Moscow.

BuzzFeed stated that Cohen told Mueller that President Trump personally instructed him to lie about the timing of the project in order to obscure Trump’s involvement. No other news organization was able to confirm the report nearly 24 hours after its publication.

Further, BuzzFeed said Mueller’s investigators learned about President Trump’s directive “through interviews with multiple witnesses from the Trump Organization and internal company emails, text messages, and a cache of other documents.”

The report also claimed Cohen then acknowledged President Trump’s instructions when he was interviewed by the Mueller team.

The screenshot below shows BuzzFeed leading with Loop’s report at 9:38 p.m. EST. The subsequent screenshot shows the report was last updated at 12:10 p.m. EST — hours after the special counsel’s dispute of the report’s underlying claims. 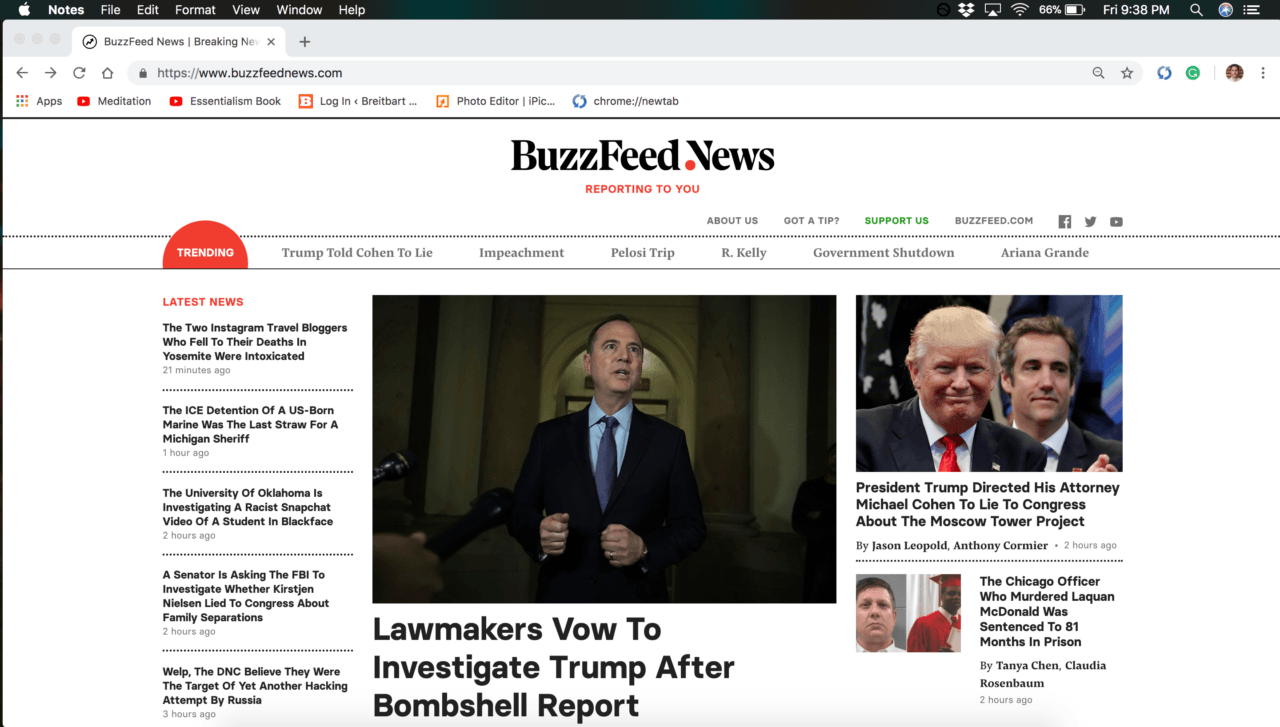 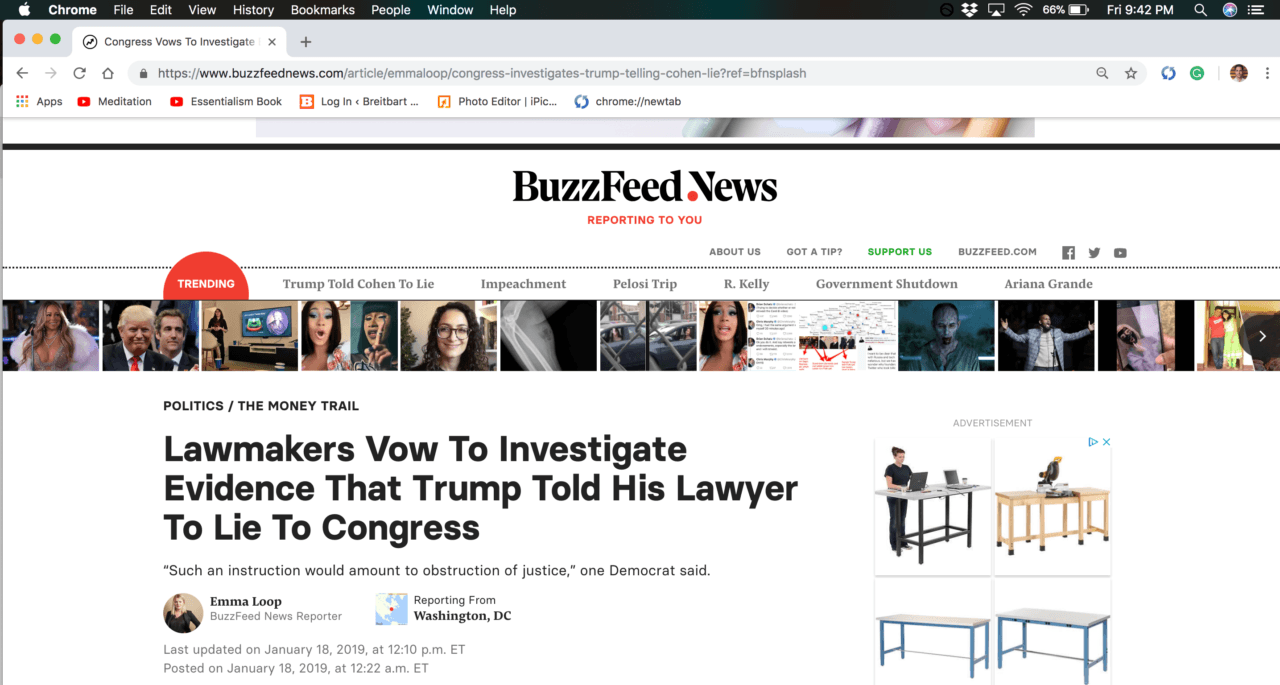 The report cites pledges by House Intelligence Committee Chairman Adam Schiff (D-CA) and Rep. Jerry Nadler (D-NY), who heads of the House’s judiciary panel. In a tweet shortly after the report’s publication, Schiff warned allegations could have wide-ranging ramifications for the president and vowed to “do what’s necessary to find out” if the report was accurate. “The allegation that the President of the United States may have suborned perjury before our committee in an effort to curtail the investigation and cover up his business dealings with Russia is among the most serious to date,” he wrote. “We will do what’s necessary to find out if it’s true.”

The allegation that the President of the United States may have suborned perjury before our committee in an effort to curtail the investigation and cover up his business dealings with Russia is among the most serious to date. We will do what’s necessary to find out if it’s true. https://t.co/GljBAFqOjh

On Friday morning, Nadler vowed to open an inquiry in response to the report. “We know that the President has engaged in a long pattern of obstruction. Directing a subordinate to lie to Congress is a federal crime. The @HouseJudiciary Committee’s job is to get to the bottom of it, and we will do that work,” the New York Democrat wrote on Twitter.

We know that the President has engaged in a long pattern of obstruction. Directing a subordinate to lie to Congress is a federal crime. The @HouseJudiciary Committee’s job is to get to the bottom of it, and we will do that work.

“If the @BuzzFeed story is true, President Trump must resign or be impeached,” he tweeted.

If the @BuzzFeed story is true, President Trump must resign or be impeached.

Asked by BuzzFeed if the House intelligence panel will look into the allegations, a gleefull Rep. Eric Swalwell (D-CA) replied: “Oh yes. It will be.”

Peter Carr, a spokesperson for Mueller’s office, released a rare statement Friday disputing the report — the second of its kind since the investigation into so-called collusion between the Trump campaign and Russia began.

“BuzzFeed’s description of specific statements to the Special Counsel’s Office, and characterization of documents and testimony obtained by this office, regarding Michael Cohen’s Congressional testimony are not accurate,” Carr’s statement read.

As of 10:19 p.m. EST, Buzzfeed finally switched its story for a report on a deadly pipeline explosion in Tlahuelilpan, Mexico. 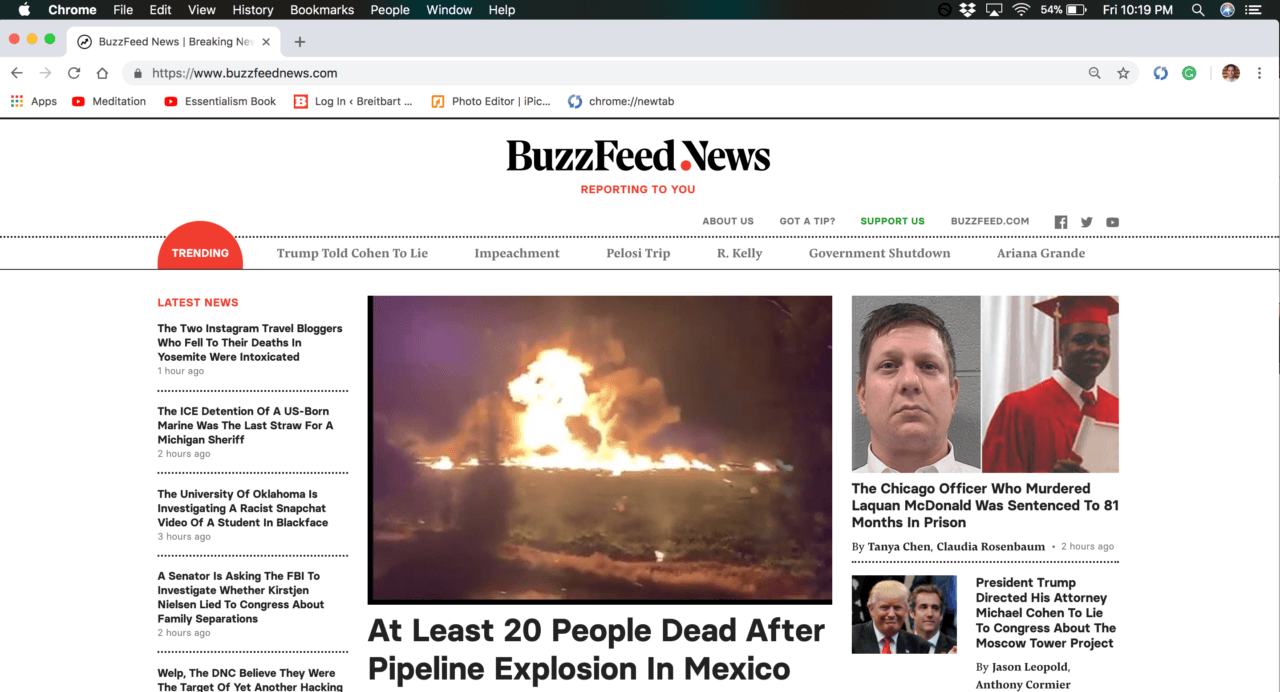 Giuliani noted that Cohen had pleaded guilty to lying and quoted federal prosecutors in New York who chastised him for a “pattern of lies and dishonesty over an extended period of time.” Mueller’s team, however, has called him a credible witness.

In November, Cohen said in his guilty plea that he made false statements to lawmakers about the Moscow real estate deal he pursued on President Trump’s behalf during the heat of the 2016 Republican campaign. The attorney claimed he lied to be consistent with President Trump’s “political messaging.”

On December 12, Cohen was sentenced to three years in jail after pleading guilty to several charges, including campaign finance violations and making false statements to Congress.

After the plea, President Trump called Cohen a “weak person” who was lying to get a lighter sentence and stressed that the real estate deal at issue was never a secret and never executed. Giuliani said that the longtime Trump lawyer was a “proven liar” and that the president’s former company had voluntarily handed over documents to the special counsel cited in the plea “because there was nothing to hide.”

“There would be nothing wrong if I did do it,” President Trump said of the proposed real estate deal. “I was running my business while I was campaigning. There was a good chance that I wouldn’t have won, in which case I would have gone back into the business, and why should I lose lots of opportunities?”

Cohen is expected to testify before the House Oversight Committee on February 7.