The Virginian-Pilot, the largest daily newspaper in Virginia, obtained the photo from the Eastern Virginia Medical School library, which can be found in school’s 1984 yearbook — the same year Northam graduate from the school. Big League Politics first reported on the photo Friday.

On the half-page set aside for Northam, there is a headshot of him in a jacket and tie, a photo of him in a cowboy hat and boots and a third of him sitting casually on the ground, leaning against a convertible.

The fourth photo on the half-page has two people, one wearing white Ku Klux Klan robes and a hood, the other with his face painted black. The person with the black face is also wearing a white hat, black jacket, white shirt with a bow tie and plaid pants. Both are holding canned drinks.

A photo from Gov. Ralph Northam’s medical school yearbook shows two men, one in blackface and one in a Ku Klux Klan robe and hood, on the same page as the governor.

The two individuals pictured have not been identified. 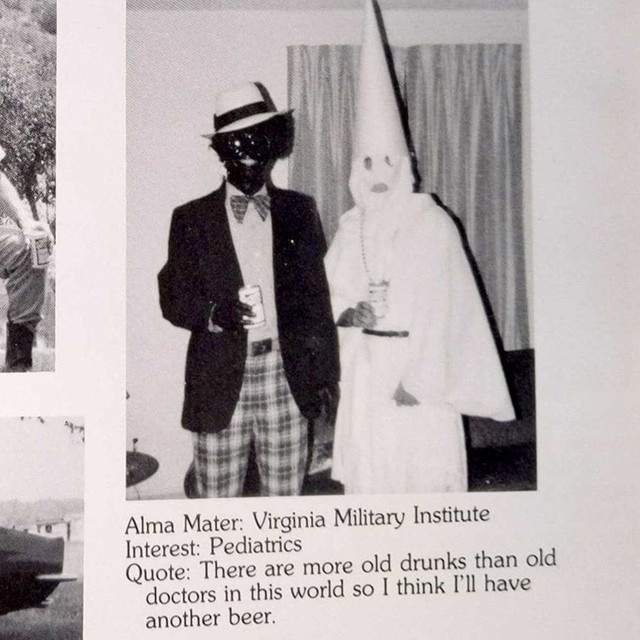 Northam and his staff have not yet issued a statement regarding the photo.

In a statement to the Washington Post, Senate Minority Leader Richard L. Saslaw (D-Fairfax) defended Northam. “His whole life has been about exactly the opposite and that’s what you need to examine, not something that occurred 30 years ago,” he said. “While it’s in very poor taste, I would think there is problem [sic] no one in the General Assembly who would like their college conduct examined. I would hate to have to go back and examine my two years in the Army. trust me. I was 18 years old and I was a handful, OK? His life since then has been anything but. It’s been a life of helping people, and many times for free.”

The photo resurfaced as Virginia Democrats push to loosen restrictions on late-term abortions, which has erupted into a fierce clash due to a viral video in which a lawmaker acknowledges her legislation would allow abortions up until moments before birth.  In the video recorded by the Republican Standard, Republican Del. Todd Gilbert asks Tran whether her legislation would let a pregnant woman who is dilating request an abortion if a doctor certified that the woman’s mental health was impaired.

“My bill would allow that, yes,” Tran replied.

“What my Democratic colleagues are most concerned about is what this moment actually revealed. It was a moment of unbridled honesty about their agenda,” said Gilbert, referring to a video exchange between him and Tran.

Northam added fuel to the fire Wednesday by describing a hypothetical situation in a radio interview where an infant who is severely deformed or unable to survive could be left to die.

In a Thursday press conference, Northam affirmed, “I don’t have any regrets,” when asked if he agreed with critics who argued his remarks hurt the legislation. “I’m a physician, I’m also the governor. But when I’m asked questions, a lot of times it is put in the context of being a physician, again, realizing how we approach, how we manage patients, how we offer advice and counseling,” he said.

“So, no, I don’t have any regrets, but I do find how my comments – I did answer that question. I regret that those comments have been mischaracterized. The personal insults toward me I really find disgusting. So, again as I said in my comments just earlier, we can agree to disagree… but let’s be civil about it.”