“Unlike this President, Rep. @IlhanMN demonstrated a capacity to acknowledge pain & apologize, use the opportunity to learn abt history of antisemitism,+grow from it while clarifying her stance,” Ocasio-Cortez tweeted on Tuesday afternoon “I’m also inspired by Jewish leadership who brought her in, not push her out, to heal.

Unlike this President, Rep. @IlhanMN demonstrated a capacity to acknowledge pain & apologize, use the opportunity to learn abt history of antisemitism,+grow from it while clarifying her stance.

I’m also inspired by Jewish leadership who brought her in, not push her out, to heal. https://t.co/ONRegDJK2S

In a follow-up tweet, the self-described Democratic Socialist accused others of claiming to be “woke,” while attempting to “police” groups on what they are allowed to be outraged by. “I’m proud @IlhanMN raised the issue of lobbyist [money] in politics & equally proud of her sensitivity to communities. Both are possible,” she added.

Lots of people here proclaiming to be “woke” trying to police communities on what they are/aren’t allowed to be upset by.

I’m proud @IlhanMN raised the issue of lobbyist Ὃ in politics & equally proud of her sensitivity to communities. Both are possible.https://t.co/Jq2Y1txFCS

On Monday afternoon, Omar apologized for tweets suggesting the American Israel Public Affairs Committee (AIPAC) paid members of Congress to support Israel, despite the fact that the group does not make political donations to politicians or endorse candidates. However, in her apology, the Minnesota Democrat once against took aim at AIPAC, describing the group’s role in U.S. politics as “problematic.” 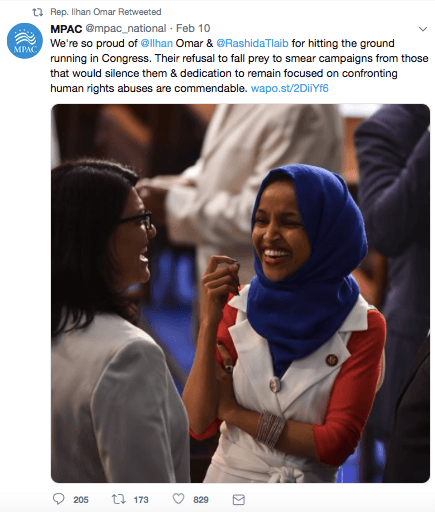 Anti-Semitism is real and I am grateful for Jewish allies and colleagues who are educating me on the painful history of anti-Semitic tropes. My intention is never to offend my constituents or Jewish Americans as a whole. We have to always be willing to step back and think through criticism, just as I expect people to hear me when others attack me for my identity. This is why I unequivocally apologize.

“At the same time, I reaffirm the problematic role of lobbyists in our politics, whether it be AIPAC, the NRA or the fossil fuel industry. It’s gone on too long and we must be willing to address it,” she continued.

Earlier Monday, House Speaker Nancy Pelosi (D-CA) and other House Democrats Leadership members had rebuked her for her remarks and urged her to apologize. The lawmakers said in a statement:

We are and will always be strong supporters of Israel in Congress because we understand that our support is based on shared values and strategic interests. Legitimate criticism of Israel’s policies is protected by the values of free speech and democratic debate that the United States and Israel share. But Congresswoman Omar’s use of anti-Semitic tropes and prejudicial accusations about Israel’s supporters is deeply offensive. We condemn these remarks and we call upon Congresswoman Omar to immediately apologize for these hurtful comments.

Flying aboard Air Force One to his rally in El Paso, Texas, President Donald Trump said Omar “should be ashamed of herself” over her tweets.

He said that Omar had made “a terrible statement” and that he didn’t find her apology to be adequate. Asked what she should have said, President Trump replied, “She knows what to say.”

Speaking to reporters ahead of a Cabinet meeting, the president told them the lawmaker should resign from the House Foreign Affairs Committee or from Congress as a whole. President Trump said:

Anti-Semitism has no place in the United States Congress. And Congressman Omar, it’s terrible what she said and I think she should either resign from Congress or she should certainly resign from the House Foreign Affairs Committee. What she said is so deep-seeded in her heart that her lame apology, that’s what it was, it was lame and she didn’t mean a word of it, was just not appropriate.

“I think she should resign from Congress frankly, but at a minimum, she shouldn’t be on committees, certainly that committee,” he added.
The Associated Press contributed to this report.