Women’s March leader Linda Sarsour led a rally on Wednesday at the steps of the Supreme Court with a large group of other leftist activists and organizations to express “unequivocal solidarity” with Rep. Ilhan Omar (D-MN) for her recent remarks deemed anti-semitic.

The rally was in response to House Democrats drafting a resolution condemning anti-semitism in general but without naming Omar. Ahead of an unscheduled vote on it, leftists are demanding it includes broader language to condemn “anti-Muslim sentiments” and “black racism.”

Sarsour, a Palestinian American activist, said the group had sent letters to “progressive” leaders across the country and planned to personally deliver a letter to House Speaker Nancy Pelosi’s office following the rally.

Nihad Awad, executive director and co-founder of the Council on American-Islamic Relations (CAIR), claimed Omar was stating the obvious — “that Israel and the AIPAC (American Israel Public Affairs Committee) have undue influence in our Congress and on our foreign policy.”

As Breitbart News has noted:

In 2007-8, CAIR was named an unindicted co-conspirator in the terror financing trial of the Holy Land Foundation for Relief and Development. That case, in turn, led the FBI to discontinue its work with the organization. In 2009, a federal judge ruled that the government “produced ample evidence to establish” the ties of CAIR with Hamas, the Palestinian terror organization. The United Arab Emirates labeled CAIR a terrorist organization in 2014 (a decision that the Obama administration opposed). 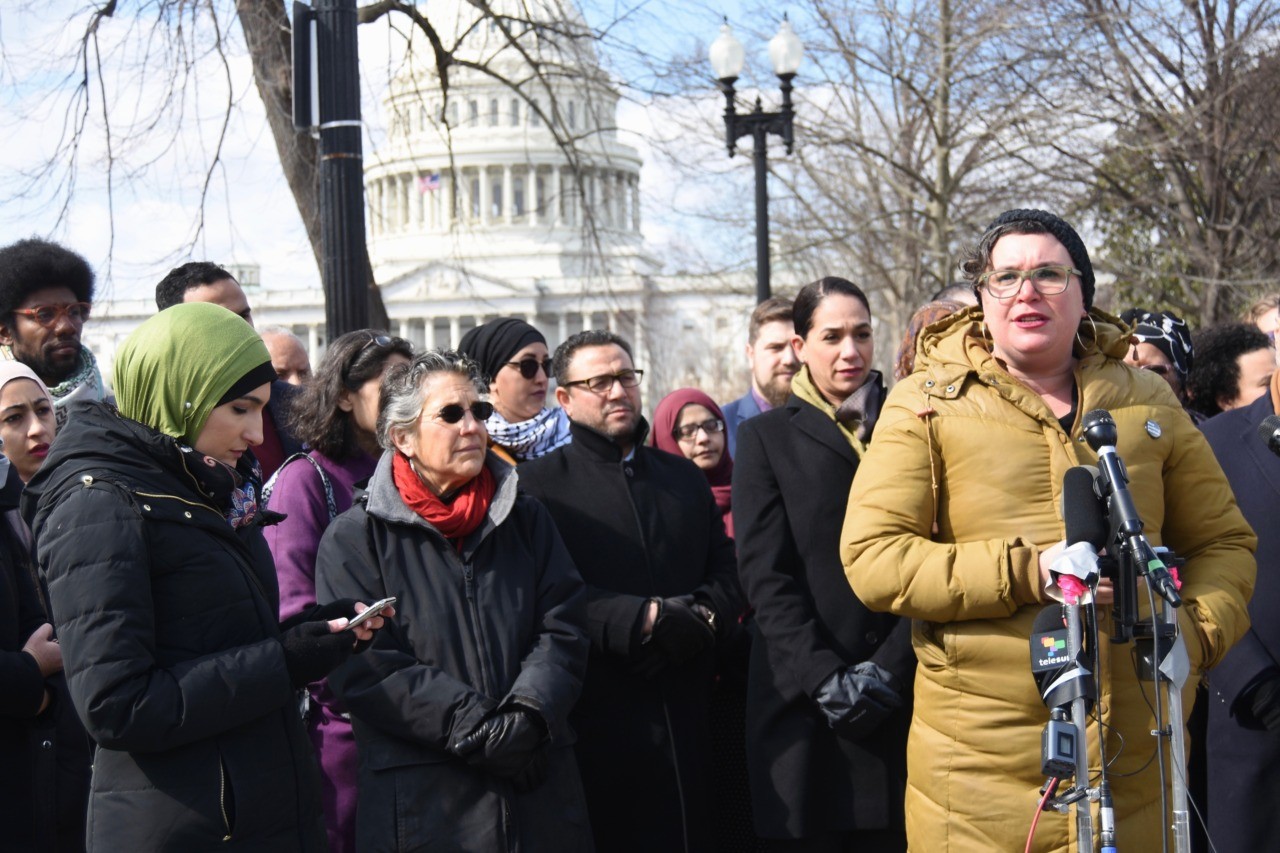 Rabbi Alissa Wise, deputy director of Jewish Voice for Peace, said the activists would “stop the desecration of God’s name” by “standing together in praise of Rep. Omar for her courage, her honesty, her truth-telling, her bravery to stand up against those that insist Palestinians are not deserving of human rights.”

“That we must critic the Israeli government as it practices Apartheid,” Wise said.

Noura Erakat, an assistant professor at George Mason University, said the “anxiety” that led Democrats to draft the resolution had nothing to do with anti-semitism and everything to do with “concern for Israel’s viability as an Apartheid state.”

Erakat said Palestine is now a “progressive cause.”

Ramah Kudaimi, acting director of the U.S. Campaign for Palestinian Rights, had a long laundry list of Israeli misdeeds, from stealing Palestinian land to “mass incarceration of men and boys” and “the targeting of civilians.”

“Rep. Omar is doing no more than asserting that Palestinian are human rights,” Kudaimi said.  “Pro-Israel forces are trying to make an example of her due to her positionally as a black Muslim refugee woman.”

“Her support of Palestinians is an inherent and natural part of her progressive politics,” Kudaimi said.

Here is IfNotNow DC leader @NatBamdad speaking at a press conference this morning, organized by Muslims and Jews, pointing out the double standard being applied to @IlhanMN and call for our political leaders to address the real threat to all our communities: white nationalism. pic.twitter.com/Ce6VdU2at1

Phyllis Bennis of the leftwing Institute for Policy Studies said it is no longer “political suicide” to criticize Israel.

“It is no longer political suicide to criticize Israel,” Bennis said. “We now see it on college campuses we see it on streets; we see it on how people talk about the issue, and this is the change that’s underway and it’s part of the change that has brought extraordinary people to Congress like Rep. Ilhad Omar, like Rep. Rashida Tlaib.”

“This is an incredible generational shift; it’s an incredible political shift, and we should be celebrating it,” Bennis said. “This is really a great moment.”

As Breitbart News reported, Speaker of the House Nancy Pelosi (D-CA) told reporters on Wednesday that the House Foreign Affairs Committee would draft a new resolution against anti-semitism, meaning that Rep. Ilhan Omar (D-MN) would be able to edit it.

Members of the Middle East Women’s Coalition, which held a rally earlier on Wednesday calling for Omar to resign, briefly interrupted the rally, asking Omar supporters why they didn’t speak out about Christian persecution and sex trafficking of young girls in places under Sharia law. 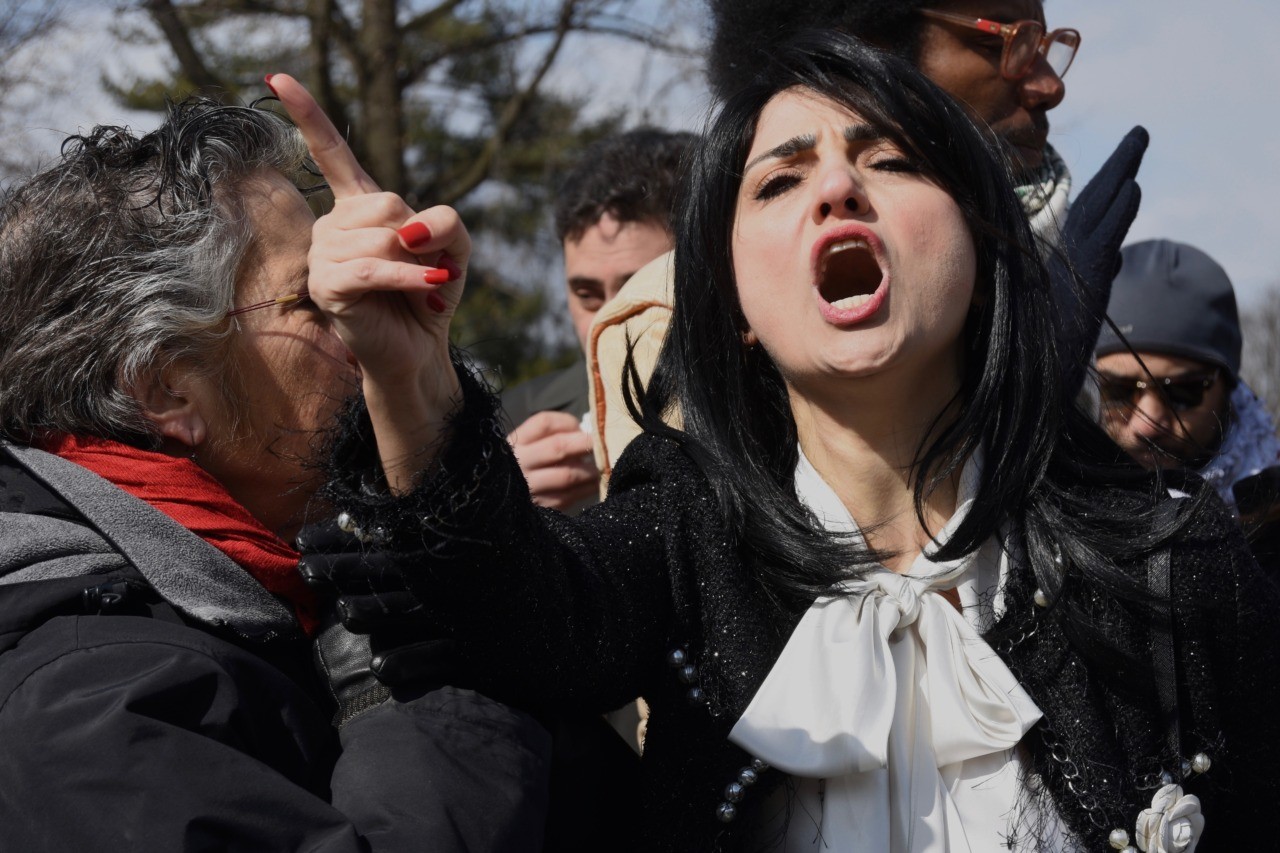 Rabia Kazan, president of the Middle Eastern Women’s Coalition, interrupted the pro-Omar rally to ask why the activists don’t speak out against Christian persecution and sex trafficking of young girls in places ruled by Sharia law. (Penny Starr/Breitbart News)

Breitbart News asked Sarsour if she believed that Israel has the right to exist. Sarsour refused to answer the question.