Multinational corporation General Motors (GM) has idled its assembly plant in Lordstown, Ohio — the largest plant it will shut down this year — leaving about 1,600 American workers out of a job and displaced in the labor market.

This year, GM announced it would stop production at four of its U.S. plants, including Detroit-Hamtramck and Warren Transmission in Michigan, Lordstown Assembly in Ohio, and Baltimore Operations in Maryland. This comes after GM laid off about 1,500 American workers in Lordstown in 2018, while their Mexico production remains unaffected and production in China ramps up.

At the beginning of this year, GM executives began laying off 14,700 workers in the United States and Canada, with the majority of the layoffs concentrated in Michigan, Ohio, Maryland, Georgia, and Texas, including at least 3,300 American factory workers. 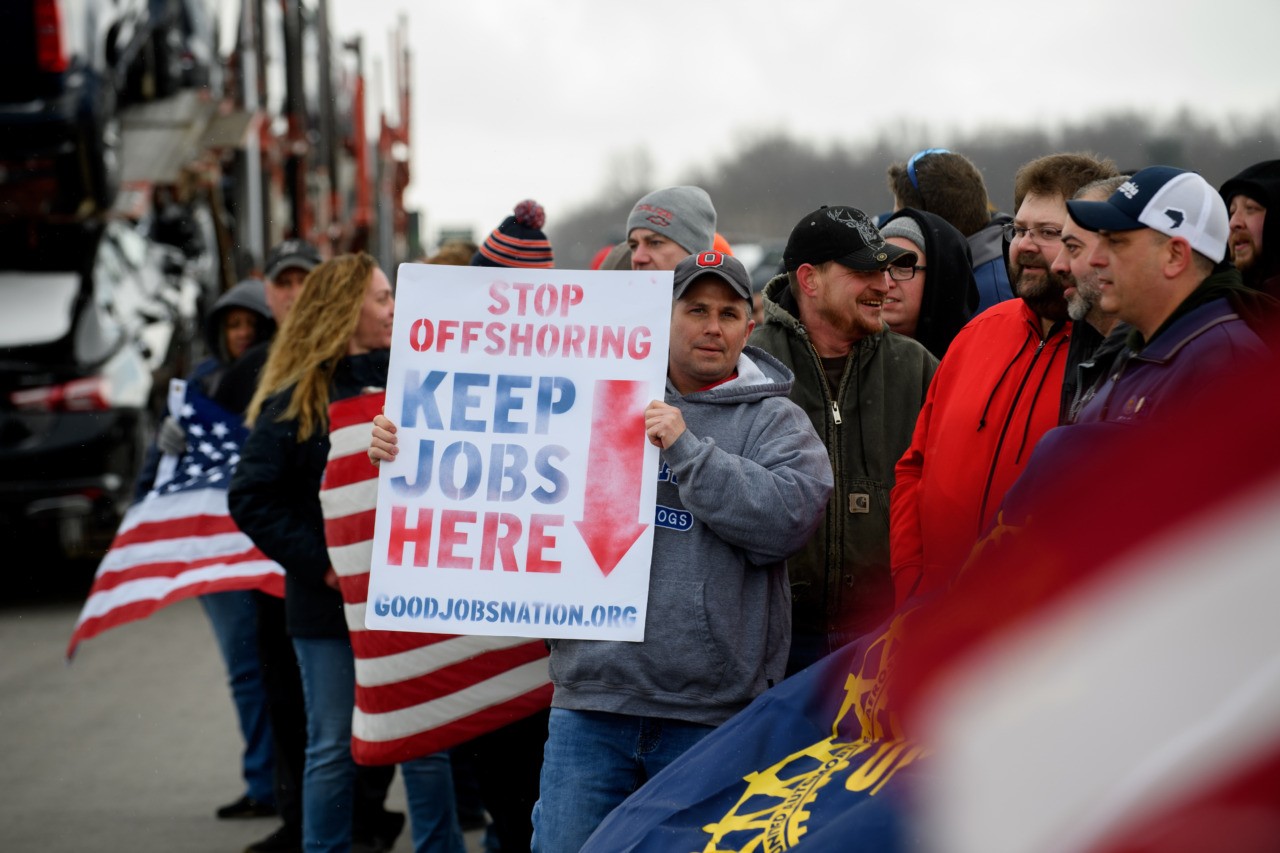 GM Lordstown workers rally outside the GM Lordstown plant on March 6, 2019 in Lordstown, Ohio. The sprawling facility was idled today after more than 50 years producing cars and other vehicles, falling victim to changing U.S. auto preferences, according to the company. (Jeff Swensen/Getty Images)

These layoffs included the mass layoff of at least 4,000 American workers in white-collar jobs for GM, many of whom were older and had worked at the corporation for more than two decades. Even in supporting industries, about 400 Americans are set to be laid off in the Lordstown, Ohio region.

The closing of the four U.S. plants comes as GM has reported nearly $11 billion in fourth quarter pre-tax profit and more than $38 billion in revenue, beating financial experts’ expectations. Additionally, despite the mass layoffs, GM CEO Mary Barra has continued to rake in nearly $22 million a year.

For the 1,600 GM workers at the now shuttered Lordstown plant, job displacement and wage cuts are unfortunate truths weighing on the company’s most loyal and longtime employees.

In interviews with the Washington Post, American workers in Lordstown who worked for GM and industries that supported the plant detailed how their wages have been cut, their livelihoods have been displaced, and why picking up to move for a GM job in another state is out of the question. GM Lordstown workers comfort one another after their last day of work at a rally outside the GM Lordstown plant on March 6, 2019 in Lordstown, Ohio. The sprawling facility was idled today after more than 50 years producing cars and other vehicles, falling victim to changing U.S. auto preferences, according to the company. (Jeff Swensen/Getty Images)

Take 47-year-old Scott Mezzapeso, who worked for a GM supplier in Lordstown. Mezzapeso once earned $22 an hour working for the supplier, but after being laid off last summer, he now earns about $11 an hour working part-time at a pizza kitchen.

“To be 100 percent honest, I thought I would be laid off for a few months and then go back to work,” Mezzapeso told the Washington Post. “At 47, I’m too old to go back to school.”

Mike Bajnok, 58-years-old, is in a similar situation. Bajnok once worked for $30 an hour at the Lordstown plant before getting laid off last year. At the time, he attempted to go back to school to be retrained in a high tech job, a move that did not pan out for him.

“I just didn’t get it. From Day One, I was lost,” he told the Washington Post. “The instructor told us to put in the flash drive. My skills are so bad, I had to ask him how to do that.”

Bajnok is unable to pick up and move to states like Tennessee or Indiana to work at a GM plant because he lives with and cares for his elderly parents.

‘Loyalty Ended When We Were Walked Out’

Many of the laid off GM workers had worked for the corporation for decades and bought GM cars as they proudly supported the company that supported their communities. During the financial crisis, American taxpayers bailed GM out to a sum of more than $11 billion.

That sense of loyalty, U.S. workers say, has been put to rest with the three-years-long round of layoffs across the country as GM jobs continue to be created in China.

“We bought GM cars because we were loyal GM employees who believed in what we were doing and made sacrifices to get the job done,” one laid off worker wrote online. “There was no thank you for your dedication, loyalty, and services when we were walked out, and the severance papers make the message quite clear that ‘you are done.’ Loyalty ended there.” 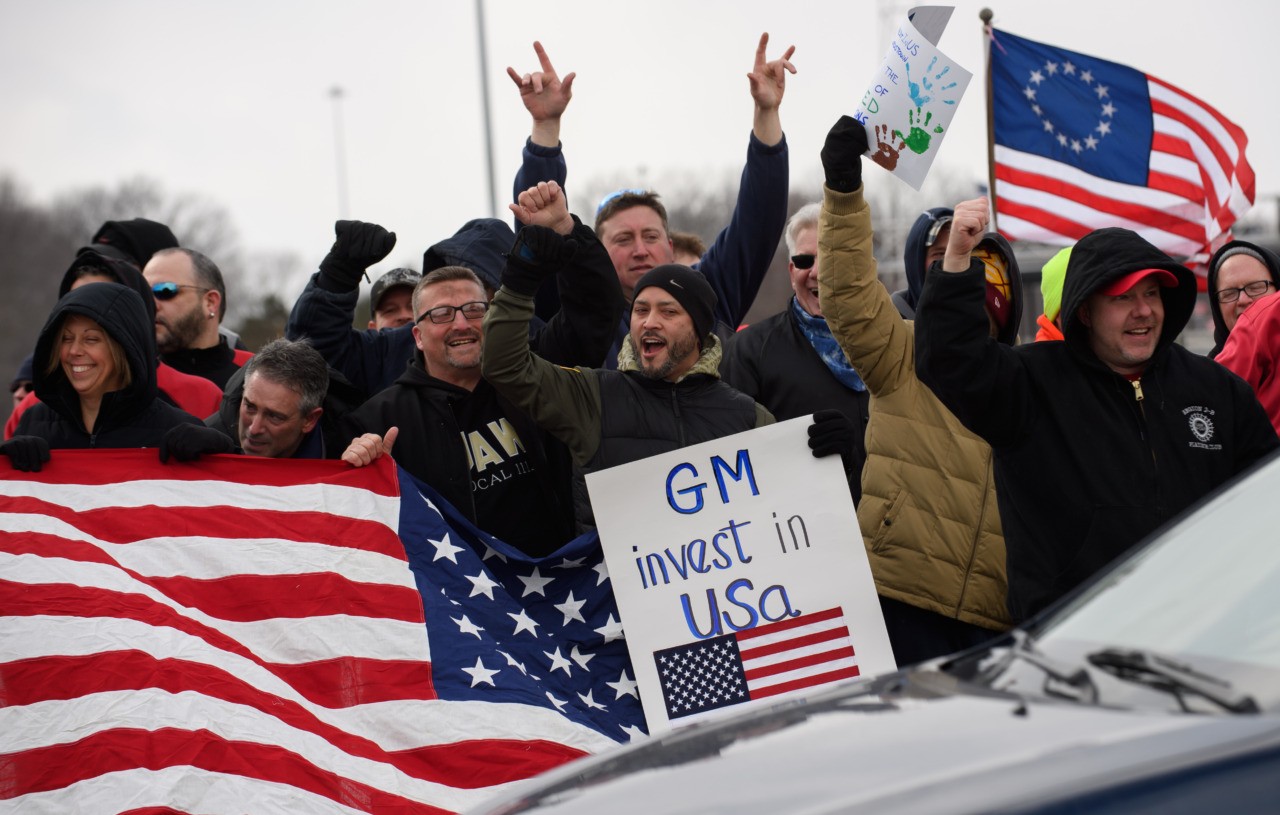 GM Lordstown workers rally outside the GM Lordstown plant on March 6, 2019 in Lordstown, Ohio. The sprawling facility was idled today after more than 50 years producing cars and other vehicles, falling victim to changing U.S. auto preferences, according to the company. (Jeff Swensen/Getty Images)

GM executives routinely tout that laid off Americans can get their jobs back so long as they are willing to move across the country. As with Bajnok’s situation, the laid off GM workers see this explanation as a corporate excuse that is easier said than done.

And, even worse is the fear and anxiety among American GM workers that they will always be on the chopping block as the corporation keeps outsourcing U.S. jobs.

“Moving to another state for work is easier said than done,” a laid off GM worker wrote on a message board, going on to say:

People built their lives at these places and moving to another part of the country is hard as it is, but the bigger threat that is in the minds of these workers is the fact that there is no guarantee that they won’t do this again, lay people of and offer another location. Imagine the fact that someone sells his house moves his family, gets his kids into a new school, and GM says in a year or two that these locations will be hit by layoffs.

While GM lays off thousands of American workers, its production in Mexico and China is ramping up. Specifically, GM is looking to manufacture an electric Cadillac in China and continue manufacturing its Envision compact vehicle in China.

The made-in-Mexico Chevrolet Blazer will soon arrive in U.S. markets. Last year, GM became the largest automaker in Mexico, as it has cut jobs in America and increased production to Mexico.

Offshoring production to Mexico has proven cheaper for GM executives, as American workers earn $30 an hour while Mexican workers earn about $3 an hour, a 90 percent cut to wages that widens the corporation’s profit margins.

“I was laid-off after working 11 yrs at GM since college grad with either met expectation or exceed expectation,” one worker said. “I was expecting to continue to grow within GM and be a lifetime GM employee. But I guess there is no such thing as company loyalty anymore.”

The United Auto Workers (UAW) union is urging American consumers to boycott GM vehicles that are manufactured in Mexico, noting that such products’ Vehicle Identification Numbers (VIN) begin with the number “3.”