The Centers for Disease Control and Prevention (CDC) reported on Monday that 626 cases of measles had been reported in 22 states — up from 555 cases in 20 states one week ago.

The number is just shy of the record 667 cases reported in all of 2014 — fourteen years after the disease was officially eliminated in the United States. 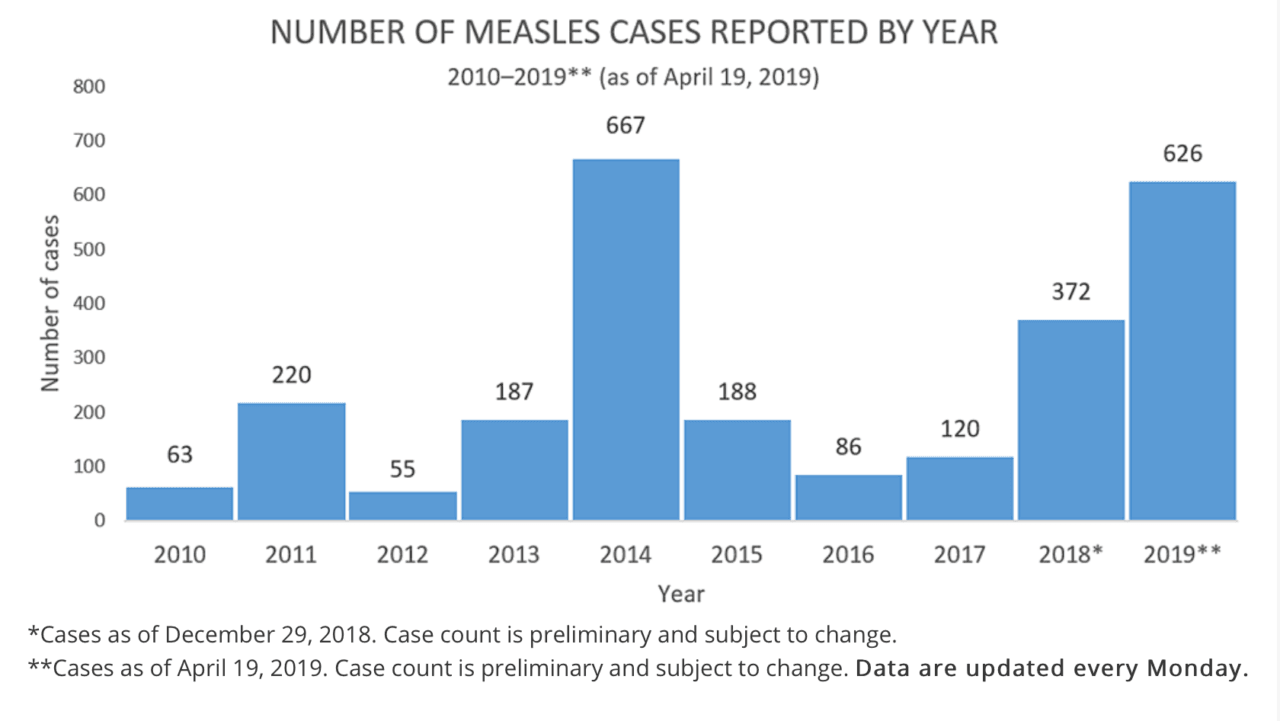 Centers for Disease Control and Prevention

The CDC blames the anti-vaccination movement and global travel as two reasons for the comeback of the disease in the states.

And on Monday the Federal Drug Administration (FDA) issued a statement aimed to alleviate fear and encourage vaccination against the highly contagious disease, according to USA Today:

“Peter Marks, director of the FDA’s Center for Biologics Evaluation and Research, said it ‘deeply concerns us’ that measles has again emerged as a public health threat. It is an ‘urgent public health priority’ to monitor measles, mumps, and rubella and raise awareness about the importance of immunization, he said.”

Marks said in the statement:

We cannot state strongly enough: The overwhelming scientific evidence shows that vaccines are among the most effective and safest interventions to both prevent individual illness and protect public health. Vaccinating against measles, mumps and rubella not only protects us and our children, it protects people who can’t be vaccinated, including children with compromised immune systems due to illness and its treatment, such as cancer.

Although most people survive measles, before vaccinations it was a deadly disease in the U.S.

Breitbart News reported that the CDC website explains that the federal government started recording measles outbreaks in 1912, and in the first decade of record-keeping, an average of 6,000 measles-related deaths was reported each year.

The disease was eliminated “thanks to a highly effective vaccination program in the United States, as well as better measles control in the Americas region,” the CDC reported.

And the threat from non-vaccinated people and infected people traveling around the world today is real.

Arthur Caplan, professor of bioethics and founding head of the Division of Medical Ethics at New York University, said that measles outbreaks are taking place around the world, including in Madagascar, an island off the coast of Africa where 100,000 people have died.

Measles can also cause swelling of the brain and deafness.

Caplan spoke with Deputy Political Editor Amanda House on SiriusXM’s Breitbart News Easter Special and talked about the anti-vaccine movement in the U.S. made up of people who believe they are linked to autism.

“I can tell you that that’s not true,” Caplan said and cited a recent study out of Denmark where more than 600,000 children were followed for a dozen years.

Not only did the study not find a link between vaccines and autism, Caplan said, but it found that more unvaccinated children developed the disorder than those who were vaccinated.

Caplan said the federal government could take some steps to keep these kinds of infectious diseases from spreading, including ending laws that allow parents to not vaccinate their children for “religious” reasons, given that mainstream religions don’t oppose them.

He also backs people facing fines who refuse to vaccinate their children and cause an outbreak, as well as putting in place a requirement for immigrants to provide vaccination records.

Caplan compared it to safety requirements in place to protect children such as car seats.

“That’s what we should be doing in the vaccine space,” Caplan said.

Caplan also said that when the country is facing health crises like the opioid epidemic, it is “tragic” to spend money on preventable diseases like the measles.

According to the CDC, if children receive the required two doses of vaccination, it is 97 percent effective in preventing measles.