The Centers for Disease Control and Prevention (CDC) reported on Monday that 555 cases of measles have been confirmed in 20 states — an outbreak only second to the highest number of cases reported in 2014, when 667 cases were reported for the entire year. 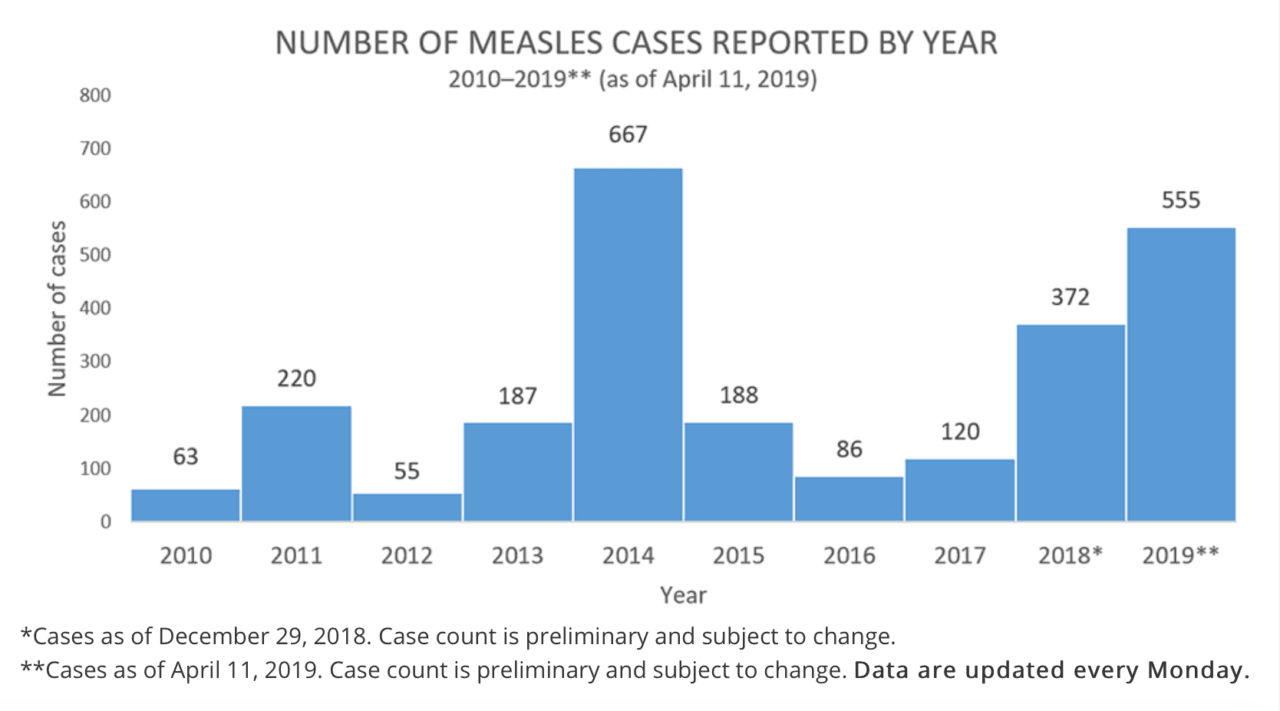 (Centers for Disease Control and Prevention)

Measles was officially eliminated in the United States in 2000, but the CDC said the disease is roaring back.

“These outbreaks are linked to travelers who brought measles back from other countries such as Israel, Ukraine, and the Philippines, where large measles outbreaks are occurring,” the CDC website stated, adding that people should be vaccinated before traveling internationally.

The CDC website said that the federal government started recording measles cases in 1912, and in the first decade of record-keeping, an average of 6,000 measles-related deaths were reported each year.

It wasn’t until vaccinations were developed and improved that the disease was declared eliminated in 2000 “thanks to a highly effective vaccination program in the United States, as well as better measles control in the Americas region,” the CDC reported.

The CDC reported on measles in the United States since 2008, including these highlights:

• 2018: The U.S. experienced 17 outbreaks in 2018. Three outbreaks in New York state, New York City, and New Jersey, respectively, contributed to most of the cases. Cases in New York and New Jersey occurred primarily among unvaccinated people in Orthodox Jewish communities. These outbreaks were associated with travelers who brought measles back from Israel, where a large outbreak is occurring. Eighty-two people brought measles to the U.S. from other countries in 2018. This is the greatest number of imported cases since measles was eliminated from the U.S. in 2000.

• 2017: A 75-case outbreak was reported in Minnesota in a Somali-American community with poor vaccination coverage.

• 2014: The U.S. experienced 23 measles outbreaks in 2014, including one large outbreak of 383 cases, occurring primarily among unvaccinated Amish communities in Ohio. Many of the cases in the U.S. in 2014 were associated with cases brought in from the Philippines, which experienced a large measles outbreak.

• 2008: The increase in cases in 2008 was the result of spread in communities with groups of unvaccinated people. The U.S. experienced several outbreaks in 2008, including three large outbreaks.

“The majority of people who got measles were unvaccinated,” the CDC noted.