While President Donald Trump’s relationship with Western European leaders has been fraught, that has not been the case with Japan, where he has enjoyed unabashed support from Japanese Prime Minister Shinzo Abe.

That warm relationship will be on display when Abe and his wife, Akie Abe, visit the White House this week.

While Abe will discuss trade, North Korea, and other matters with the president on Friday afternoon, he and his wife will join Trump and first lady Melania Trump for a private dinner afterwards to celebrate her 49th birthday. Trump and Abe are expected to play golf together on Saturday.

“This is really about deepening our global partnership with Japan,” a senior administration official said during a conference call with reporters on Thursday. “It’s also about [the] president’s personal friendship with Abe.”

Trump and the first lady are then planning to travel to Japan next month to become the first state guests to meet new Japanese Emperor Naruhito — the nation’s first new emperor in more than three decades.

Richard Fontaine, chief executive officer of the Center for a New American Security, said the visit is “very significant and reflects the importance the Japanese government places on its alliance with the United States and its relationship with President Trump in particular.”

“Prime Minister Abe has assiduously cultivated good ties with Trump, and the invitation to meet the new emperor fits squarely with that effort,” he said.

Trump’s trip to Japan next month will also have other personal flourishes. Japanese officials are planning to have Trump watch the final day of a sumo wrestling tournament so he can present a trophy to the winner, and travel to a Japanese naval base in Yokosuka to visit a destroyer being retrofitted as Japan’s first post-World War II aircraft carrier, according to reports. The two leaders are expected to play golf again.

Japan’s Chief Cabinet Secretary Yoshihide Suga said receiving Trump as the emperor’s first state guest would “symbolize the unshakable bond of the Japan-U.S. alliance,” according to the Associated Press. Trump is then expected to return to Japan in June for the Group of 20 (G-20) summit in Osaka.

The succession of visits between the two leaders underscores a reinvigorated relationship between U.S. and Japanese leaders — one that was more strained under President Obama. The New Yorker wrote in November 2017:

Abe’s personal relationship with Barack Obama verged on the prickly, driven by an American perception of the Prime Minister as a dangerously nationalistic historical revisionist. Abe had resigned himself to more of the same arm’s-length treatment under Hillary Clinton, but Trump’s surprise win, in 2016, upended plans like a box full of carp chow.

In contrast, Trump has met with Abe at least eight times, more than with any other foreign leader, and talked on the phone with him at least 26 times, according to the Washington Post. Abe has also played golf more with Trump than with any other head of state. In February, Trump announced that Abe had nominated him for the Nobel Peace Prize.

“President Trump has consulted closely with Prime Minister Abe since the beginning of his presidency,” the senior administration official said.

Experts say that, since Trump’s election, Abe has made it a priority to forge a good relationship with the president. A week after the 2016 election, Abe made a refueling stop in New York in order to be the first state leader to congratulate Trump in person at Trump Tower, gifting him a gold-plated golf club.

“What Abe has done in particular is personalize the relationship with Trump in a way that we haven’t seen in 30 years since the Reagan-Nakasone relationship,” said Michael Auslin, the Payson J. Treat Fellow in Contemporary Asia at Stanford University’s Hoover Institution. Trump, he said, “puts enormous stock on these personal relationships, and so very wisely Abe’s been investing in that.”

Japan has also cultivated a relationship with Ivanka Trump, the president’s daughter and one of his top advisers. The first daughter visited Japan in November 2017, for an international conference on women’s empowerment, one of her top priorities.

But it is also a relationship that both sides have cultivated due to need.

Over the last decade, China has grown more militarily assertive in the region, along with its economic rise, and has embarked on ambitious plans to become the world’s dominant superpower by 2050 — which has implications for both the U.S. and Japan.

While there has been a recent thaw between the two nations, Japan still primarily sees China as a regional rival, if not adversary, and is locked in a territorial dispute with China over the Senkaku Islands in the East China Sea.

Japan relies heavily on the U.S. for its defense. Japan’s constitution formally prohibits the nation from having a military or nuclear weapons, although it has robust “self-defense” forces and is considering amending the constitution to reflect that.

The U.S., in turn, relies heavily on Japan to maintain its role as guarantor of security in the region in light of China’s rise. The U.S. also has enormous stake in ensuring the waters in the region remain free for global commerce, with 80 percent of maritime trade passing through the Asia Pacific.

Japan is vital to the U.S. military maintaining a forward presence in the Asia Pacific. The U.S. military has approximately 50,000 military personnel in Japan dispersed among 85 facilities, according to U.S. Forces Japan. The Navy’s U.S. Seventh Fleet has 18 ships and 100 airplanes operating from Japan.

“The alliance with Japan is the cornerstone of American strategy in northeast Asia and helps to stabilize the region,” Fontaine said. “Japan has the most capable military of any U.S. ally in the Indo-Pacific, and is increasingly using it to help other countries in the region grow stronger. That’s important given the China challenge.”

The U.S. and Japan are working to further integrate their militaries. The Japan Air Self Defense Force (JASDF) stood up its first F-35A fighter squadron at Misawa Air Base last month, and Abe approved a five-year defense plan in December that included purchasing 105 more F-35 fighter jets for about $10 billion, making Japan the biggest foreign buyer of the jet.

Japan’s Izumo-class destroyer, which is currently a flat-top helicopter carrier, will be converted into an aircraft carrier that can launch F-35Bs, and Japan also plans to buy two Aegis Ashore land-based interceptor missile systems from Lockheed Martin.

Japan has also been integral to helping the Trump administration formulate a security strategy on China.

The Trump Administration’s “free and open Indo-Pacific” strategy has its origins in Japan. The concept entails the U.S. working with Japan and like-minded allies in the region to make sure the region is politically free and economically prosperous — and not under Chinese coercion.

The U.S. and Japan are also working together to provide developing nations in the region with alternatives to China’s Belt and Road Initiative, in which China offers cheap loans to help them build infrastructure that, in some high-profile cases, China ends up seizing.

“The U.S. needs Japan if we want to remain engaged in the same way in the region,” Auslin said. “For Japan, it still has no other real allies…there’s nothing like the U.S.-Japan relationship, so that is crucial to Japan.”

North Korea’s nuclear weapons program has been another security challenge in the region that has made the U.S.-Japan relationship more critical.

Japan has been supportive of Trump’s outreach to North Korea. Prior to Trump’s first summit meeting with North Korean leader Kim Jong Un, North Korea was increasingly lobbing ballistic missiles over and near Japan. As a U.S. ally, Japan is not only a target, but a potential participant in any war between the U.S. and North Korea.

There have also been repeated North Korean incursions into Japanese waters. Japan also seeks the return of more than a dozen Japanese abductees kidnapped off the streets by North Korea.

The U.S. has relied on Japan not only for basing its forces, but in helping to apply “maximum pressure” to get North Korea to the negotiating table via unilateral and multilateral sanctions. Japan’s cabinet earlier this month extended sanctions on North Korea over its nuclear weapons program and the abductions, although it has recently softened its stance in light of ongoing U.S.-North Korea talks.

Japan would also play a role in helping develop the North Korean economy were Pyongyang to agree to give up its nuclear weapons program.

When it comes to trade, however, the U.S.-Japan relationship in the Trump-Abe era has been a little rocky.

“A lot of American companies are invested in Japan, and lot of real estate development groups are in Japan, and Japan becomes a foothold for U.S. companies doing business across Asia. The other way is true as well,” said Shihoko Goto, deputy director for geoeconomics and the senior Northeast Asia associate at the Wilson Center’s Asia Program.

“There are a lot of Japanese manufacturers, including carmakers like Toyota and Honda, that have plants in the United States…they’re so integrated that companies have vested interests both ways to ensure that the lanes of commerce are uninterrupted and that they remain efficient and that tariffs are not a problem.”

The trade friction between the two arose early on when the Trump administration pulled out of the Trans-Pacific Partnership, a multilateral trade agreement with 11 countries in the region that excluded China. The U.S. also did not exempt Japan from Section 232 sanctions on steel and aluminum in March 2018, which was seen as a further blow.

Trump wants a bilateral trade agreement with Japan and to reduce a $68 billion trade deficit with Japan, the bulk of it due to Japanese auto imports. He has threatened to impose tariffs of up to 25 percent on Japanese automobiles, and has called upon Japanese automakers to add more jobs in the U.S. Under pressure from the agricultural industry, Trump has also called on Japan to open its markets to U.S. agricultural products.

Trump and Abe agreed last September to start trade bilateral trade talks, and last week had their first round of talks in advance of Abe’s visit this week.

“One of the issues that Japan is really concerned about going into the trade negotiations now, is that the United States will take actions specifically targeted against the Japanese auto manufacturers,” Goto said. “Unlike imposing tariffs on steel, the car sector is very much at the heart of Japanese industry.”

Auto tariffs would be an “incredible political blow” for Abe,” she added.”Abe has put a lot of his personal stake in trying to cultivate good personal ties with Trump to get a good deal with Japan.”

Experts expect Abe’s upcoming trip to Washington to be positive, however, since it is a diplomatic trip rather than a trade negotiation trip. The two leaders will also discuss energy, digital connectivity, infrastructure, and investment, the senior administration official said.

While the Japanese public is still mostly skeptical towards Trump, it appears to have warmed up over time.

A November 2018 Pew Research Poll showed that about 30 percent of Japanese expressed faith in Trump, but it was up six percentage points from 2017. Japanese cookies with Trump’s and Abe’s faces on them were a popular item in the Japan Diet’s gift shop in December. 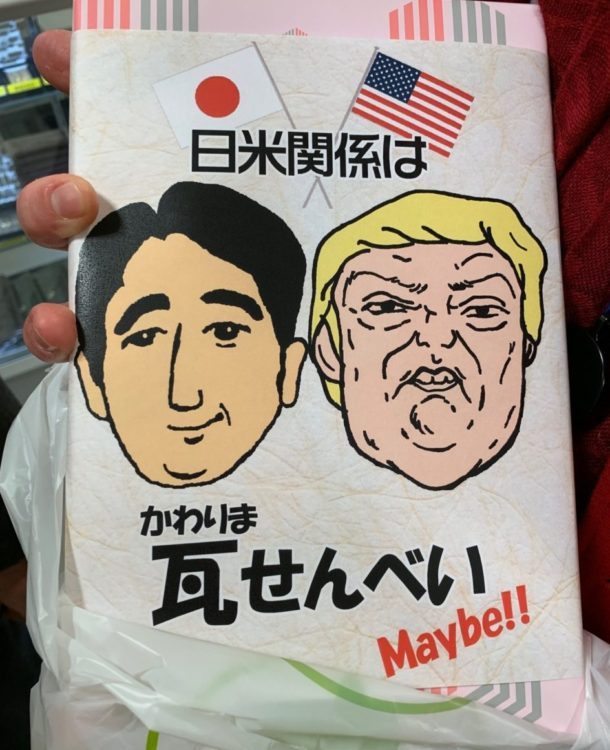 Trump-Abe cookies are one of the most popular items being sold in the Japan Diet’s gift shop. (Kristina Wong/Breitbart News)

As to whether Trump and Abe actually like each other as much as it seems, experts say it is hard to tell.

“Here’s a fact that’s indisputable. Abe has played more golf with Trump than any other head of state,” Goto said. “That is a fact. The rest becomes hope and expectation and speculation.”