Economic populist sentiment is continuing to rise across the United States, a new poll finds, revealing that about 2-in-3 swing voters say the country’s economic system mostly benefits the well-connected, powerful, and rich.

The latest Washington Post/ABC News finds that economic populism is growing across party lines, specifically with Democrats and swing voters, ahead of the 2020 presidential election.

Among all American voters, about six-in-ten — or 60 percent — said the U.S. economic system mostly benefits those in power like the billionaire donor class, elected Washington, D.C. politicians, Wall Street, and corporate executives.

Only about 36 percent of all American voters said the U.S. economic system benefits all Americans. 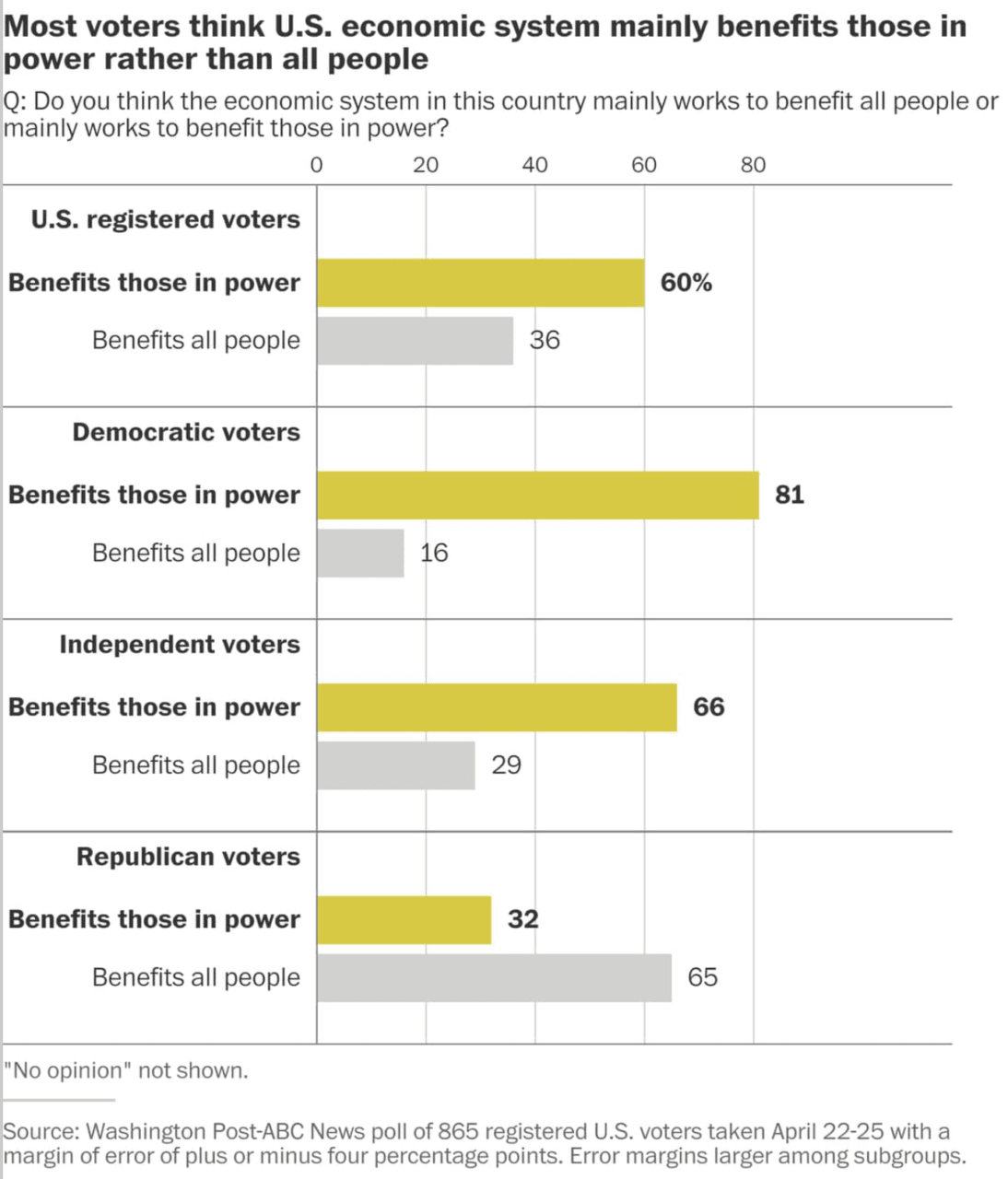 The poll comes as socialist Sen. Bernie Sanders (I-VT), who is vying for the Democrat nomination for president, has laid out an economic populist agenda that includes banning multinational corporations that outsource American jobs from receiving federal contracts, committing to renegotiate the country’s free trade deals that have depressed wages and outsourced U.S. jobs and industry, and vowing not to appoint a trade representative with ties to Wall St.

Sanders has also railed against the GOP tax cuts, signed by President Trump, as part of his economic populist agenda and is promising to repeal them if elected. The tax cuts, the latest polling has found, have become increasingly opposed by American voters — including Republicans.

While Republicans focus much attention on touting the tax cuts, corporations like General Motors (GM) have set out to lay off thousands of American workers by closing four plants across the U.S. this year, and Foxconn, which once promised to build a factory in Wisconsin, has backed away from the plan. Likewise, thousands of American workers’ jobs hang in the balance as T-Mobile and Sprint continue their efforts to merge, a plan that union workers say would eliminate nearly 29,000 American jobs.

Already, about half of Americans say automation has done more harm than good for American workers, and 76 percent agree that automation in the future will lead to more income inequality.

Though Trump has successfully increased wages by four percent over the last 12 months for America’s blue collar and working class by decreasing foreign competition through a crackdown on illegal immigration, experts have warned that those wage hikes will not continue heading into the 2020 election should current illegal immigration levels keep rising at record levels.