Australia’s conservative coalition government has been returned to power and world leaders are lining up to congratulate Prime Minister Scott Morrison on an achievement only he and his backers could have ever imagined.

A devout Christian, Mr. Morrison, 51, told supporters he had “always believed in miracles” after he defied pollsters, punters, bookmakers, climate catastrophists and most – but not all – media pundits to return to the government benches on the back of a populist wave:

To start a family, to buy a home, to work hard and provide the best you can for your kids. To save for your retirement. These are the quiet Australians who have won a great victory tonight!

U.S. President Donald Trump added his own praise for what was a remarkable victory against a hard left Labor Party challenge. He said on Twitter.

“Congratulations to Scott on a GREAT WIN,”

Congratulations to Scott on a GREAT WIN! https://t.co/IKxDrQmHfV

According to the White House, the two leaders reaffirmed the “critical importance” of the long-standing alliance and friendship between the United States and Australia in a phone call, and they pledged to continue their close cooperation on shared priorities.

Mr. Trump’s own victory in 2016 was seen to be mirrored in Mr. Morrison’s win, after he defied both the polls and a (mostly) hostile media to defeat Democratic rival Hillary Clinton by winning over the silent majority.

Congratulations, @ScottMorrisonMP on your electoral victory in Australia. I look forward to working together to create jobs and new opportunities for Canadians and Australians alike. https://t.co/0onCtnr6jo

Former Australian leader John Howard was also happy to see a man defy the odds to claim a win based on solid campaign trail work:

“It is very clear @ScottMorrisonMP has waged an incredibly successful campaign and the indications so far are very promising” – Former prime minister John Howard has just arrived at Liberal HQ. #ausvotes #7NEWS pic.twitter.com/XeB40Im6WQ

Every single opinion poll for the past two years had pointed to a Labor victory ahead of Saturday’s vote, predicting the demise of the architect of Australia’s famously tough migration and border policies. One of the first acts Mr.Morrison made as the country’s new leader last year was to exit the U.N. migration pact:

The Labor party sought to make this election a poll on the climate.

It proposed introducing a target of reducing emissions by 45 percent by 2030, and said the difference between the parties’ policies on the climate “crisis” was “night and day, black and white.” 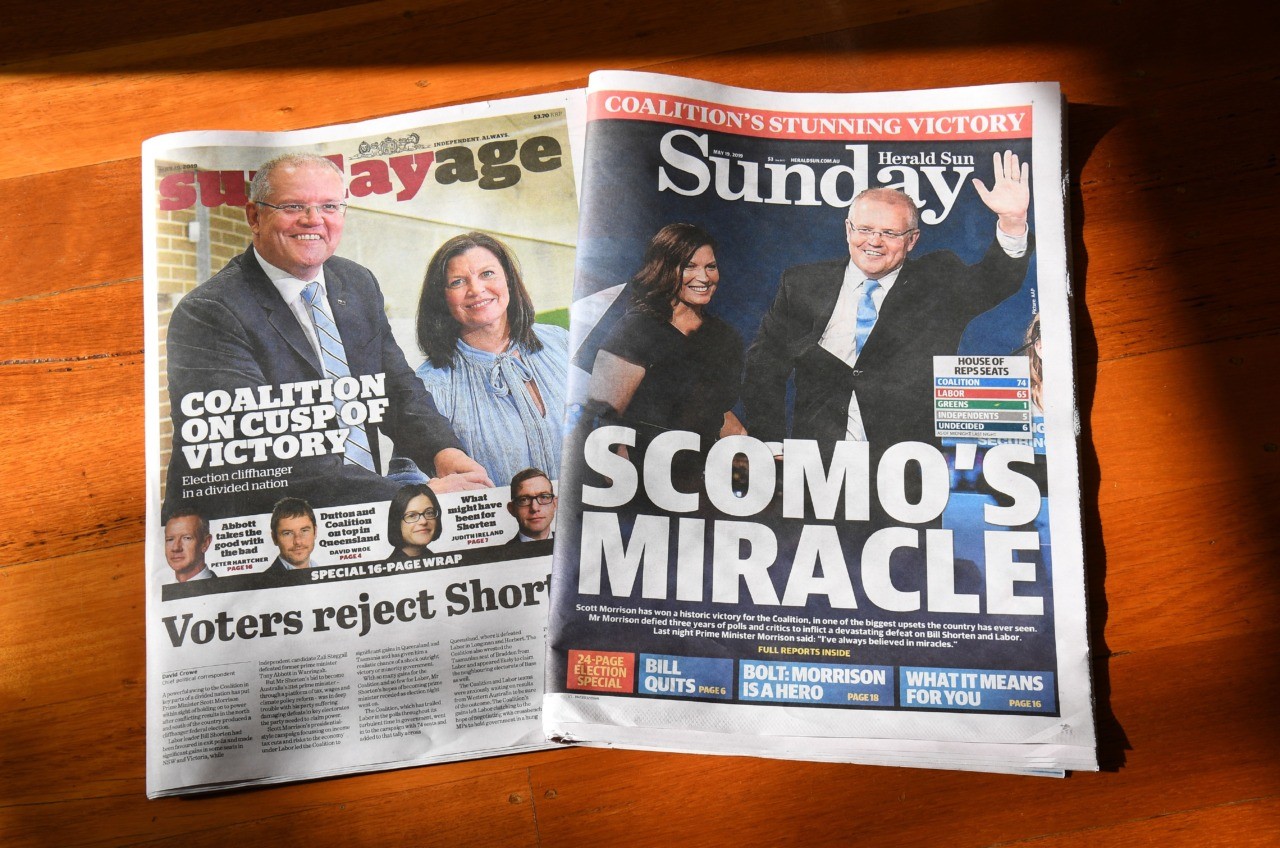 This photo illustration taken on May 19, 2019 show Sunday newspapers in Melbourne displaying the victory of Australia’s coalition government after they won a general election they were expected to lose,  prompting Prime Minister Scott Morrison to declare: “I have always believed in miracles!” (WILLIAM WEST/AFP/Getty Images)

Mr. Morrison, however, cast himself as the candidate who would work for aspirational voters. He concentrated on jobs, income, helping first home buyers, security for pensioners and the continued mining of Australia’s massive coal resources.

To that end, just two days before the election was called, Mr. Morrison pushed through environmental approvals needed to progress the controversial Adani coalmine project near the Great Barrier Reef.

He also was happy to back moving Australia’s diplomatic representation in Israel from Tel Aviv to Jerusalem.

I spoke today with Australian PM @ScottMorrisonMP. He informed me that he is considering officially recognizing Jerusalem as the capital of Israel & moving the Australian embassy to Jerusalem. I’m very thankful to him for this. We will continue to strengthen ties between & !

“I know that under your leadership the great friendship between Australia and Israel will grow even stronger,” Israel Prime Minister Netanyahu said to Mr. Morrison on Twitter late Saturday night, acknowledging the deep ties between the two countries.

Although he first entered Parliament in 2007, Mr. Morrison rose to the public’s attention as immigration minister and his introduction of tough asylum seeker policies alongside offshore detention centres for processing illegal arrivals.

Mr. Morrison is the son of a policeman and an active member of a Sydney Pentecostal evangelical church.

He voted no in Australia’s plebiscite on same-sex marriage, listed “church” as one of his interests in his Who’s Who profile, and regards former prime minister John Howard as a political inspiration.