Interesting headline in the New York Times on May 30: “New Democratic Debate Rules Will Distort Priorities, Some Campaigns Say.”

A Breitbart reader can insert all the jokes he or she might wish, but we must remember, for the mostly liberals and lefties who read the Times, a messed-up debate process has been no laughing matter.

Of course, Democrats might not wish to hear this Republican’s two cents on how they should operate the selection process for their 2020 presidential nominee—and specifically, their mechanism for determining participation in the upcoming presidential primary debates.

However, the Democrats’ debate-mechanism is so full of unintended consequences—playing out, as it has been, in real time, in public view—that this author feels compelled to comment, for two reasons:

First, the subject matter is irresistible. You know, it’s like watching a train wreck, or a clown car—one just can’t look away.

Second, let’s use this Dem debacle as a teachable moment. That is, every Republican should understand what the Democrats are doing, just in case somebody on the GOP side, down the road somewhere, gets the idea of using the same sort of selection mechanism for Republicans.

So now let’s take a look at what the Democrats are doing to themselves:

As everyone knows, the Democrats have a problem: too many candidates. They have 23 announced presidential hopefuls, far more than are manageable. The most immediate issue is figuring out how to get all of them, or almost all of them, onto a debate stage. And so back in February, the Democratic National Committee (DNC) announced its criteria: To be included in the first debate, each candidate must be at one percent in the polls, and have 65,000 unique donors, with a minimum of 200 donors in 20 different states. Of these, the top 20 hopefuls will be chosen, according to further gradations of the criteria. The first such debate-athon, to be held in Miami, will stretch over two nights, June 26 and 27. In other words, each candidate will get perhaps all of five minutes to shine.

Yet soon, according to the Times, the criteria for future debates will be upped: The new rule calls for 130,000 unique donors, as well as two percent in the polls. We can observe that the new polling threshold seems reasonable, and yet, as the Times observes, there’s weirdness in the raised requirement for individual donors. 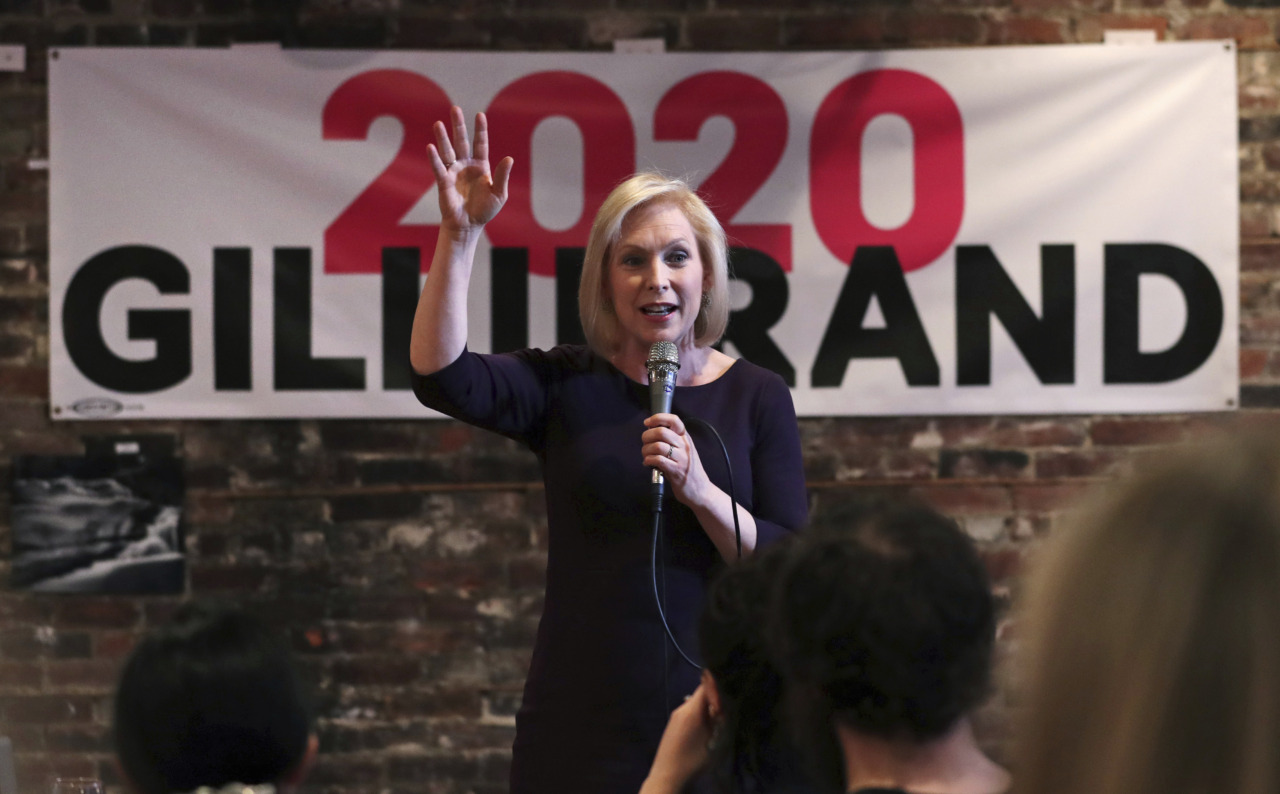 Sen. Kirsten Gillibrand addresses a gathering during a campaign stop at a coffee house in Dover, New Hampshire, on April 5, 2019.  (Charles Krupa/AP Photo)

To illustrate, we can start by taking note of what’s already been happening to one of the Democrats running, Kirsten Gillibrand of New York. She’s a three-term U.S. senator from a state of nearly 20 million people, and yet, since her campaign hasn’t caught fire, she’s having trouble with the 65,000 threshold. In fact, she’s been reduced to trying to wheedle money out of audiences so that she can get to the donor mark, thus making it onto that precious debate stage. Politico caught the ridiculousness of her pitch in Hampton, New Hampshire:

Okay, so if Gillibrand is that desperate, maybe she shouldn’t be running at all.

Yet other Democrats aren’t so much begging as investing—investing, if that’s what one wishes to call it, in ads on TV and on tech platforms. As the Times notes, candidates are spending $40 on digital ads that will net them just a single $1 donor.

To put it another way, the DNC’s magic number of 65,000 donors has been a magic gift of money for ad-buyers, database-mongers, and, of course, TV and social-media networks.

As another lower-tier Democrat, Sen. Michael Bennet of Colorado, put it, “I certainly don’t think the DNC should be favoring national fund-raising and cable TV over decisions by voters in early states.” Bennet might not think the DNC should be behaving this way, but since the DNC is behaving this way, Democrat presidential campaign operatives, as well as media platforms, have found themselves enjoying a new stream of revenue. 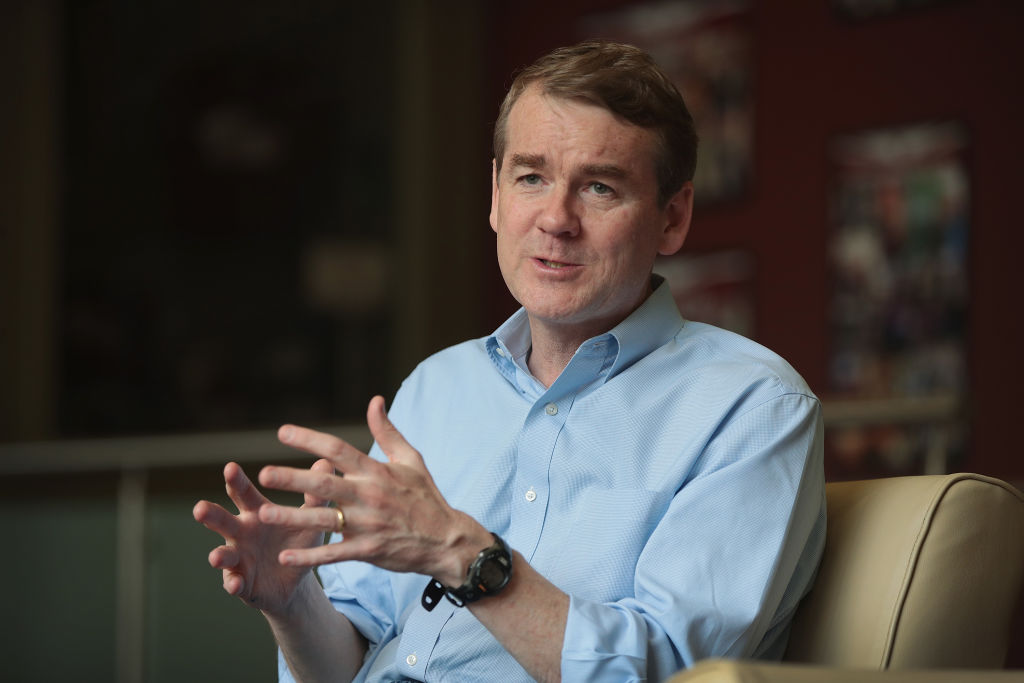 Sen. Michael Bennet speaks to guests during a campaign stop on May 18, 2019, in Sioux City, Iowa. (Scott Olson/Getty Images)

And such revenue is most likely coming at the expense of other Democrat campaigns for other offices; that is, the presidential candidates seem to be hoovering up donations that might otherwise go to down-ballot races.

In the meantime, other Democrat presidential hopefuls aren’t just begging, or investing; they’re gaming—that is, gaming the system. For instance, there’s former Maryland Rep. John Delaney, who’s pledging to donate $2 to charity for every $1 he receives for his campaign. Delaney, who’s personally wealthy, can afford to keep his pledge. As he says, “I’d rather give money to charity than a digital marketing firm”—although, as the Times notes, he’s also hired digital marketers. 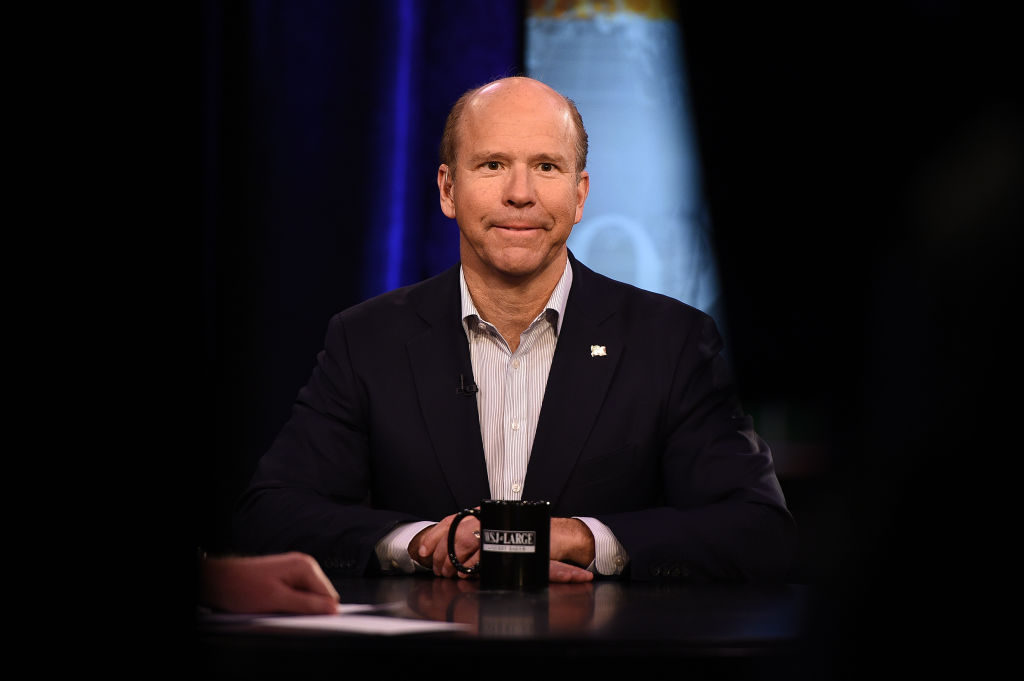 And yet we might ask ourselves: Does such a 2-for-1 match seem like a good idea? That is, will such money-tactics help the Democrats determine who’s their best candidate? Instead, it seems like a way for for rich candidates to buy their way in. Of course, Delaney himself is so far down that he might never be the nominee, but it’s a safe bet that he and his money have encouraged other self-funders to think about further, perhaps even more brazen, stratagems.

And speaking of the games rich people play, there’s also the game being played by fans of Gov. Jay Inslee. A pro-Inslee Super PAC—such entities always being the plaything of the rich—has spent $411,000 on Facebook ads, and yet those who click on the PAC’s ads find themselves directed to the Inslee campaign’s website; the Times calls that “an almost sleight-of-hand way to convert big money checks into the small donors needed to qualify for the debates.”

Actually, to this observer, it seems like more than an almost sleight of hand; the whole idea of Super PACs is that they are independent of the candidate—and yet this Inslee ploy might be better characterized as hand-in-glove. 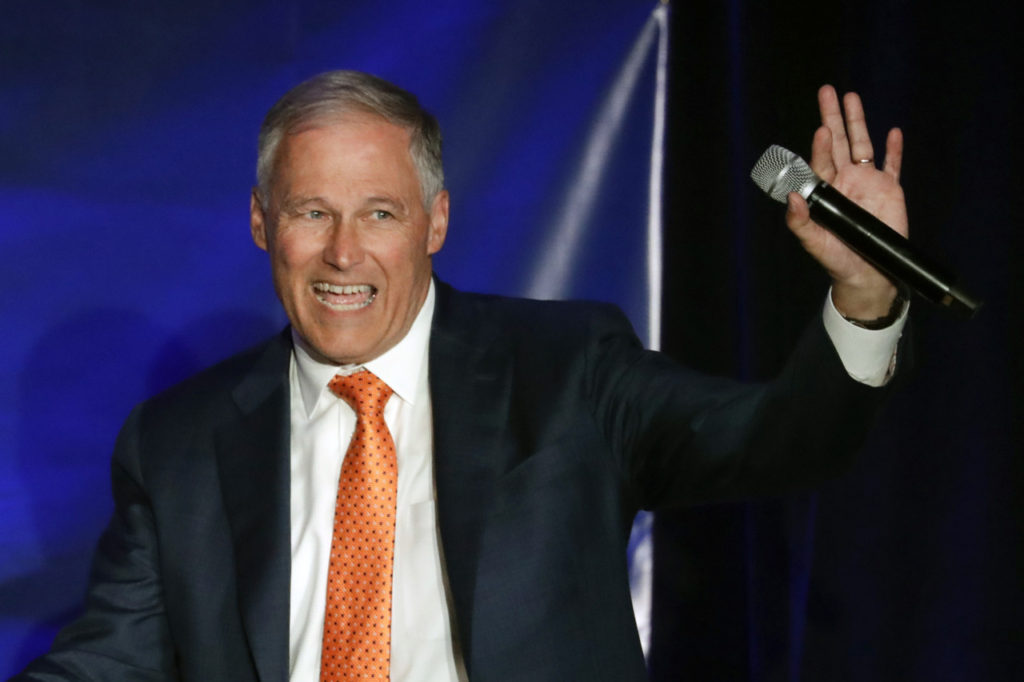 Washington Gov. Jay Inslee waves after speaking during a campaign event at the Unity Freedom Presidential Forum on May 31, 2019, in Pasadena, California. (Chris Carlson/AP Photo)

So let’s step back and take a look and what the DNC has wrought. If the donor rule has already inspired candidates to game the system with their own money and with Super PAC money—plus whatever other shenanigans that might not yet have been reported—what will happen next, now that the threshold has doubled? And the pressure to scarf up donors doubled, too?

For instance, Facebook—which, as we have seen, has been a winner from all this extra ad-buying—just announced that it’s launching a new cryptocurrency. Now it’s safe to say that few people understand how these cryptocurrencies work, and not many of them, if any, work as watchdogs for the Federal Election Commission.

In other words, a new and mostly unknown tech innovation is going to go snaking through the social-media ecosystem—and at the very moment that candidates are scrambling to get more donors. So what sort of stealth or sneakiness might emerge from the future confluence of demand (the quest for more donors) and supply (Facebook’s new cryptocurrency)? Let your imagination wander.

So this is the system that the DNC has unleashed for 2020; the familiar notion of how a candidate runs for president is so…yesterday. By contrast, today, candidates have been joined by a new coterie of consultants and techies aiming at hitting an arbitrary new target—a fundraising target. Hmm, more money in politics? Not quite “the party of the people.”

To be sure, many Americans long ago decided that the Democrats have become the party of the tech rich—and this twist in the ’20 presidential campaign provides only more proof. Yet even for hardcore Democrats, it’s hard to argue that this is “little guy”democracy in action.

Maybe the Democrats should go back to the old system: you know, when everyone runs for president and then the voters get to vote, thereby sorting out the candidates, and producing a winner.

Under such a system, the candidates, activists, and activist groups would be free to set up anything they wanted, in terms of debates, or partial debates, or one-on-ones. Indeed, it might be refreshing to watch the Democrats try to excel at politicking, as opposed to fundraising.

In any case, this Republican hopes that the GOP never falls pray to the siren song of digital financial finagling. Let’s always have Republican hopefuls running for the office of president, as opposed to the post of fundraiser/techmeister—even if the latter pays better.

After all, one such party is enough.