Greta Thunberg, the green teen from Sweden who sailed on a racing yacht from Europe to New York City because she refuses to fly on a plane, did not speak on Friday at a “climate strike” protest at the United Nation’s headquarters. She marched with the few dozen young people that showed up but sat silently as protesters chanted and gave speeches.

“We cannot live in a world that is burning,” one young woman said, “that is melting.”

“Climate change is already affecting millions of people,” another young woman claimed. “This could lead to mass extinction.”

“We are not here to guilt individuals that forgot to recycle a cup last week,” another young woman said. “We are here to hold cowardice [sic] politicians accountable who have caused this damage by turning their heads in fear.”

“Those 12 years left (to stop carbon emissions),” a young woman yelled. “Is now down to 10 years and five months.”

One young woman said she wanted to acknowledge Hurricane Dorian, a storm that is still in the Atlantic Ocean and is not expected to make landfall somewhere in Florida until early next week.

“It is ravaging the coast of Florida,” the girl said. “It is not a coincidence. It is a direct impact of the climate crisis.” 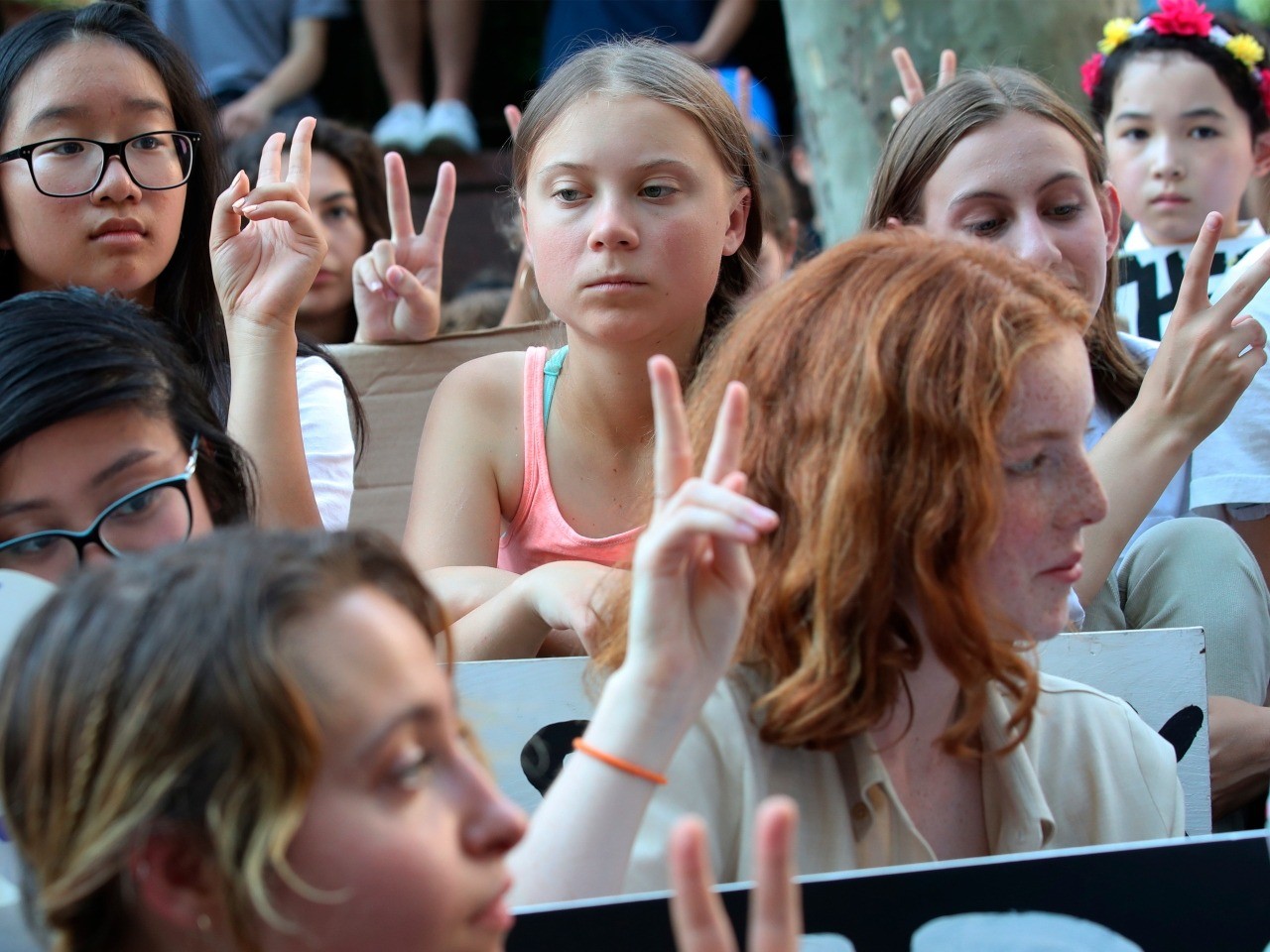 The youths held signs that read “Greed Kills,” “Help My Home is on Fire,” and “527 Years of Indigenous Resistance” and chanted in between speeches phrases such as:

“Stop Denying the Earth is Dying.”

“No more coal, no more oil, keep your carbon in the soil,” and “Waters are rising, people are dying.”

A speaker said that the protest was not the goal of the movement by a “catalyst” for action, including a planned “global climate strike” on September 20, just three days ahead of a U.N. climate summit that is expected to draw leaders from around the world and where Thunberg will be a special guest and speaker.

The speaker listed the group’s demands, which will be presented at the U.N. summit: “A just and livable world” where “fossil fuels are left out of every decision” around the world; 100 percent renewable energy around the globe; and “holding polluters accountable” for causing the “climate crisis.” 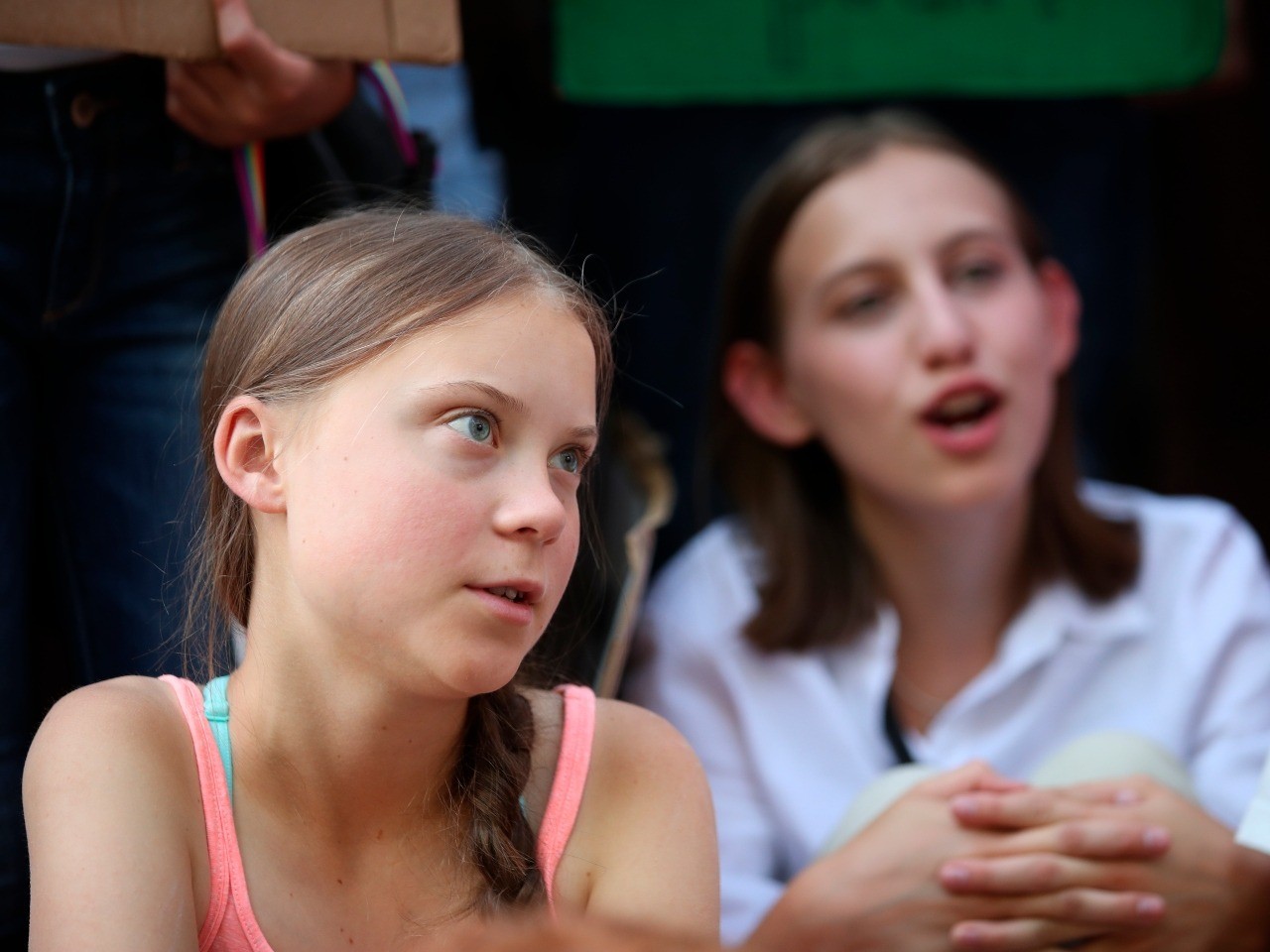 The publicist for the New York City protest refused to speak with Breitbart News when an inquiry was made about Thunberg’s appearance and about Alexandria Villaseñor, a 14-year-old who claims she has been protesting every Friday at the United Nations for 38 weeks. Reporters on the scene were kept from interviewing Thunberg during the protest.

Thunberg gained international attention when she cut school a year ago to appear before the Swedish parliament where she called on young people around the world to cut school every Friday to protest climate change.

It is not clear how many students in New York are still on summer break or skipped classes, but Thunberg’s publicity team announced that the 16-year-old is taking a “sabbatical” from her high school studies to “concentrate on her activism.”

After attending the U.N. summit, Thunberg and her father will travel in the United States, Canada, and Mexico before attending a second U.N. climate change summit in Chile in December.

Thunberg has said she is not sure how she will get back to Sweden, and no details have been released on how she will travel around the North and South American continents without the help of fossil-fuel-powered transportation.