This stampede of opportunistic dilettantes — conducting self-promotion campaigns posing as presidential bids — have all endorsed Rep. Sheila Jackson Lee’s (D-TX) resolution, H.R. 40, calling for a commission to “study and develop reparation proposals for African-Americans” and a national apology from the government “for the perpetration of gross human rights violations and crimes against humanity on African slaves and their descendants.”

Rep. Lee is not an idiot. Perhaps a quarter century in Washington has convinced her that you are. Why spend millions to fund a Congressional commission to study what we already know to be true? The Democratic Party is the party of slavery.

But don’t take my word for it.

Rep. Lee said her party is “building the political will” to jumpstart the reparations commission. But Democrats never possessed more political will than they did a decade ago. During Barack Obama’s first two years in office, Democrats held majorities in the House and a filibuster proof majority in the Senate. Democrats could have easily passed any bill they wanted and no reparations bill ever made its way to Obama’s desk.

The Texas Congresswoman says her new bill “is not symbolic.” Of course it is. The reparations bill is a symbol, a political bludgeon meant to beat decent people over the head with, to assure racial healing can never happen in America. Democrats know and count on the fact that a relationship cannot be repaired without forgiveness, without the injured party agreeing to move on. Democrats choose to pick at this scab, even 150 years after America’s first Republican president led the abolishment of slavery. Democrats don’t want racial healing. What Democrats want is to use reparations as one more wedge issue to continue to castigate America as an unrelentingly racist country, where non-whites must live in a state of constant fear that the bigotry bogeyman is lurking around every corner.

If this resurgent push for reparations and Rep. Lee’s new bill is not symbolic, it smacks of stupid. Which brings us back to the pro-reparations Democrats running for president.

Other 2020 candidates, Mayor of South Bend, Indiana, Pete Buttigieg, former HUD secretary Julián Castro, and entrepreneur Andrew Yang have all endorsed studying reparations. Self-help guru Marianne Williamson proposed a plan to spend $200 billion to $500 billion for reparations. Former Vice President Joe Biden wants to “have conversation about reparations.” He spent the summer defending and then apologizing for his record of working with segregationist senators in the 1970s. Biden said in 1975 that he’d be “damned” to feel “responsible to pay for something that happened 300 years ago.” Apparently “damned” no more, the Democrat front-runner stood on the debate stage on Thursday night and was asked “what responsibility do you think that Americans need to take to repair the legacy of slavery in our country?”

Biden, his teeth literally falling out of his mouth, detailed a plan to address his party’s centuries of enforcing racial oppression on black people that essentially boiled down to sending social workers into black homes “to help them deal with how to raise their children,” because, as he put it, “they don’t know quite what to do.”

Robert Francis “Beto” O’Rourke — whose family (and his wife, Amy’s family) owned slaves — supports paying reparations. The former Texas Congressman said he “reached out” to Bryan Stevenson who directed him to the National Memorial For Peace And Justice in Montgomery, Alabama, which is dedicated to the enslaved black people and those terrorized by lynching and Jim Crow segregation in America. “[Stevenson] said stories like these need to be told in every single community,” O’Rourke explained.

I agree. Americans in every community in this country should know that the world’s largest lynching memorial is a testament to the Democratic Party’s legacy of racism.

Indeed, an era of terror in America between 1830 and 1960 saw several thousand lynchings of both blacks and whites. A breathtaking brutality, furiously enforced first by pro-slavery zealots and later by segregationists to intimidate and subdue civil rights activists and abolitionists. Research compiled by various organizations from the Tuskegee Institute to the Equal Justice Initiative documents more than a century of savagery. This torment, while racially inspired, was inflicted for political ends. Lynchings in America peaked precisely at the dawn of the Ku Klux Klan’s inception. As Pulitzer Prize-winning historian and professor at Columbia University Eric Foner notes, “Founded as a Tennessee social club, the Ku Klux Klan spread into nearly every Southern state, launching a ‘reign of terror’ against Republican leaders — black and white.” The pro-slavery KKK, writes University of North Carolina emeritus professor of history Allen W. Trelease, “became in effect a terrorist arm of the Democratic party.” 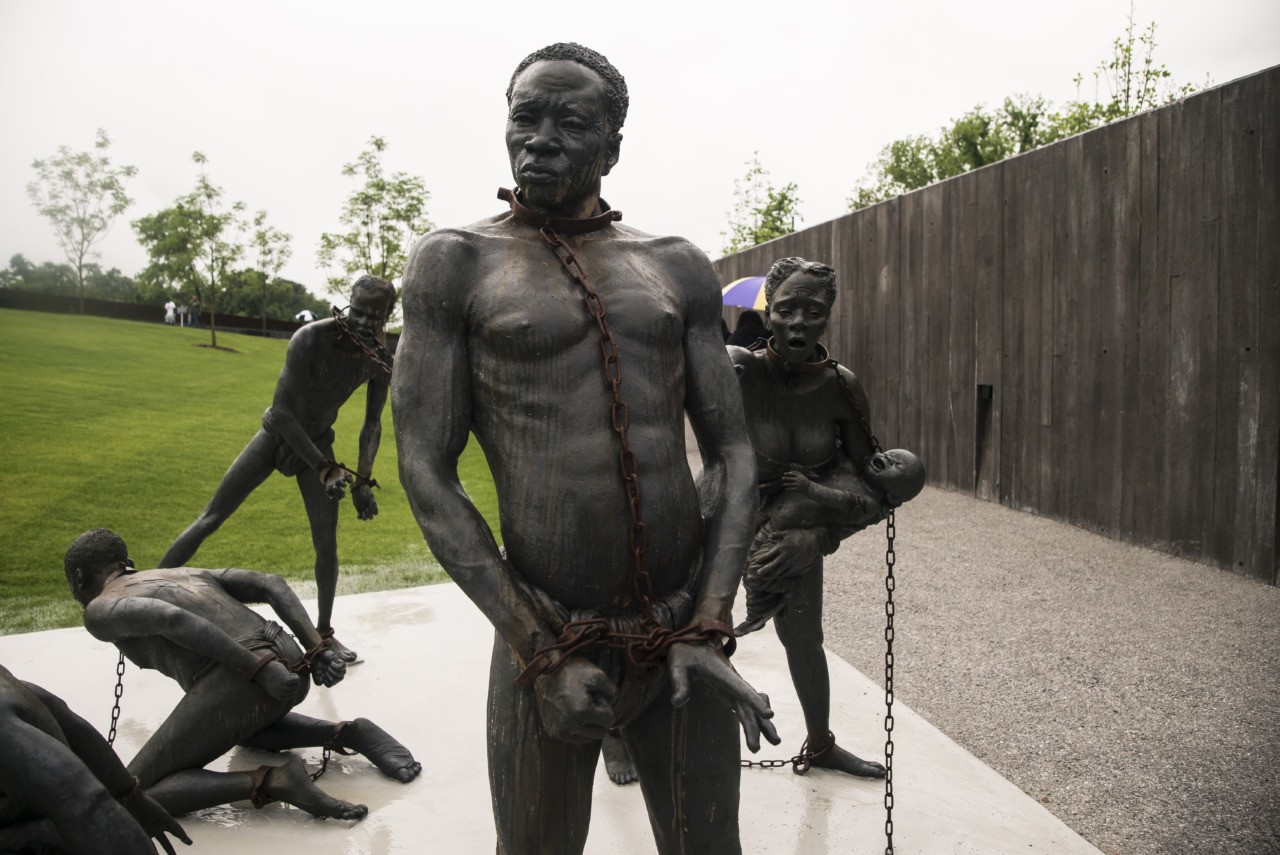 A sculpture commemorating the slave trade greets visitors at the entrance National Memorial For Peace And Justice on April 26, 2018 in Montgomery, Alabama. The memorial is dedicated to the legacy of enslaved black people and those terrorized by lynching and Jim Crow segregation in America. Conceived by the Equal Justice Initiative, the physical environment is intended to foster reflection on America’s history of racial inequality. (Bob Miller/Getty Images) 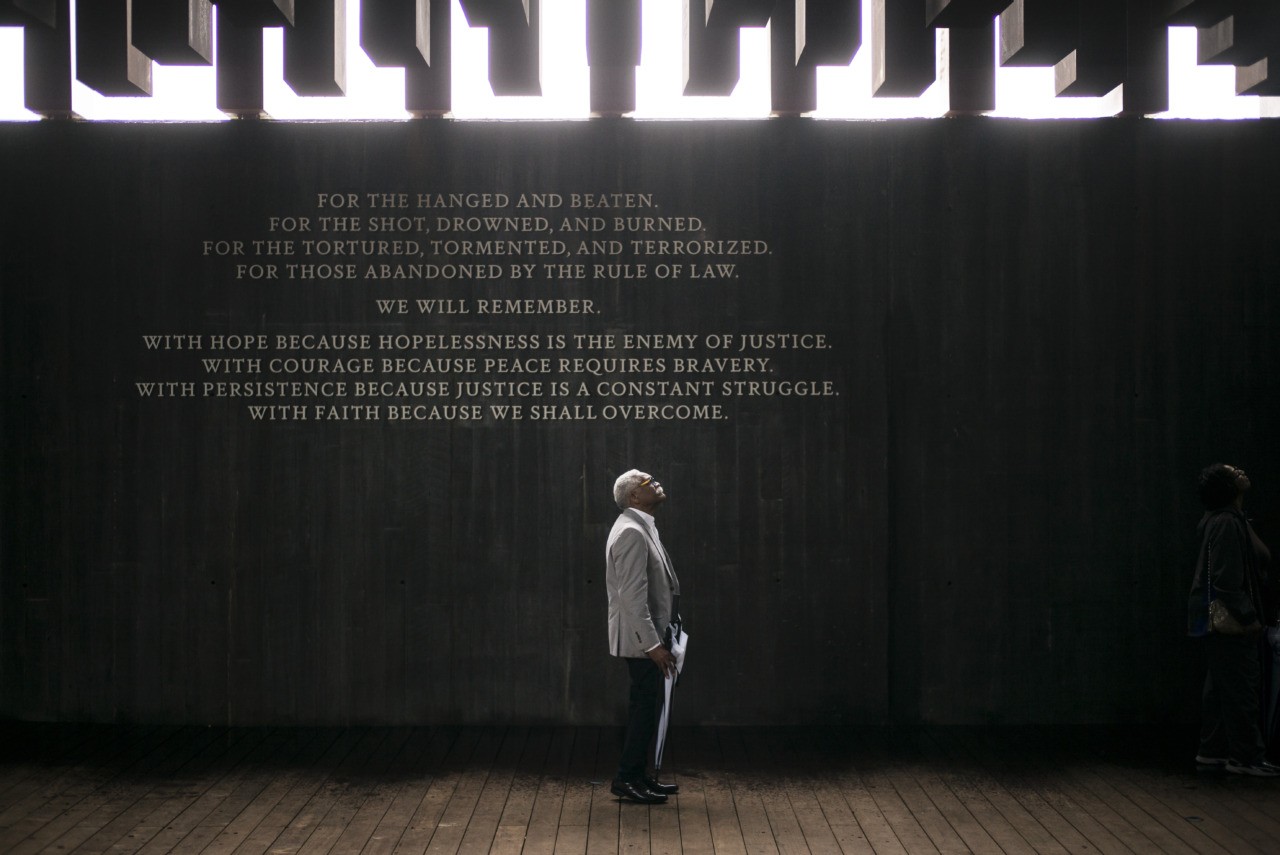 Ed Sykes, 77, visits the National Memorial For Peace And Justice on April 26, 2018 in Montgomery, Alabama. Sykes, who has family in Mississippi, was distraught when he discovered his last name in the memorial, three months after finding it on separate memorial in Clay County, Mississippi. (Bob Miller/Getty Images)

Let me be the first to invite this horde of millionaires and political elites, standing on debates stages, sprinting across the country, half of them white-‘splaining black oppression, to apologize for the their party’s historic, centuries-long legacy of expanding slavery, lynchings, black codes, and Jim Crow laws throughout America. They can also lead by example and start writing checks to their favorite black philanthropic organization.

Is there any wonder than why Democrat.org is missing more than 100 years of history from its history page? The history highlighted on the Democrat’s official party website begins in 1920!

What’s more? Democratic presidential candidates were against reparations before they were for them. Indeed, Barack Obama never supported reparations. He said in 2004 that a one-time payoff “would be an excuse for some to say we’ve paid our debt.” He also recently addressed the inherent unfairness of forcing millions of Americans to compensate for sins that occurred one hundred years before their parents immigrated to this country.

Democratic voters are split on the issue of paying cash reparations to the descendants of slaves. Just 49 percent of Democrats endorse the idea. Thankfully, over two-thirds of all Americans reject it.

Politically, reparations is a wildly unpopular idea. Practically, its merits are nearly nonexistent.

Who exactly would be on the hook, 150 years later, to pay a $14 trillion debt? Would ancestors of the more than 642,000 Union soldiers who died to abolish slavery be exempt? What about the 2 million men who risked their lives during the war?

What happens to them?

This nonsense is why I wrote 50 Things They Don’t Want You to know. 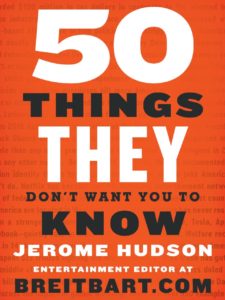 The legacy of Black America is one of great accomplishment in the face of incalculable evil. At a time when most blacks were constantly told to feel inferior to whites, many performed to the contrary. At the turn of the century, former slaves showed a Herculean hunger to learn how to read and write. In just a few decades after gaining freedom, black literacy rates skyrocketed from around 20 percent to roughly 70 percent. Chattel slavery destroyed countless family units and an untold number of lineages were lost. But something remarkable happened from 1890 to 1940; a slightly higher percentage of black adults had married than white adults, according to census data. What’s more? The first public high school for blacks in America sent gradates to Harvard and other Ivy League schools as early as 1903.

These achievements occurred despite the Democratic Party’s political terrorism after Reconstruction, when wanton lynchings, rape, and arson of black people and their property persisted. This long campaign of racial savagery by Democrats and the Ku Klux Klan before and during the Civil Rights Movement cast a long shadow over African Americans in this country.

Today, too many Democrat-run inner cities are black-on-black killing fields. This happened despite the explosion of black social and economic dynamism that began to take form post-World War II. It is also true that we blacks have now spent several decades avoiding turning the spotlight on ourselves. We’ve too often blamed what’s clearly a genocidal self-destruction on racism and faceless societal woes. We’re overwhelmingly responsible for putting each other in body bags; sending each other to the morgue, our bodies riddled with bullets. Yet, the political left insists that we’re not supposed to ask how racism is responsible for that havoc? Black childbearing-aged women make up four percent of the population but account for over 35 percent of all abortions. Is this glaring disregard for the black unborn also the fault of racism? Democrats want us to believe it is. What about the 70 percent illegitimacy rate among blacks (90 percent in some inner cities)? This is self-sabotage. These failures are on us.

We all know Democrats run the governments in the cities that routinely fail to protect their people. What have decades of punditry, political grandstanding, and civil rights posturing done to lift legions of poor blacks out of their plight? After decades of oppressing us and then proving utterly impotent and useless in fixing the cultural cancers that continue to vex our communities, Democrats are now dangling reparations in our faces.

Excerpts from this article appear in Jerome Hudson’s forthcoming book 50 Things They Don’t Want You to Know, which is available for pre-order now.