Woody Johnson, the U.S. ambassador to the UK, said having “built the greatest empire” and “held off the Nazis”, the British “didn’t need a lecture from anybody on how to run their country… and that includes Brussels”, according to the Daily Telegraph.

The diplomat added: “We stand with the people of the UK and we always will.”

The protesters were so loud as to make it impossible for Johnson to properly conduct himself, leaving the prime minister no choice but to abandon the conference. Bettel went ahead on his own, attempting to humiliate his guest by leaving an empty lecturn standing in place of the UK leader. 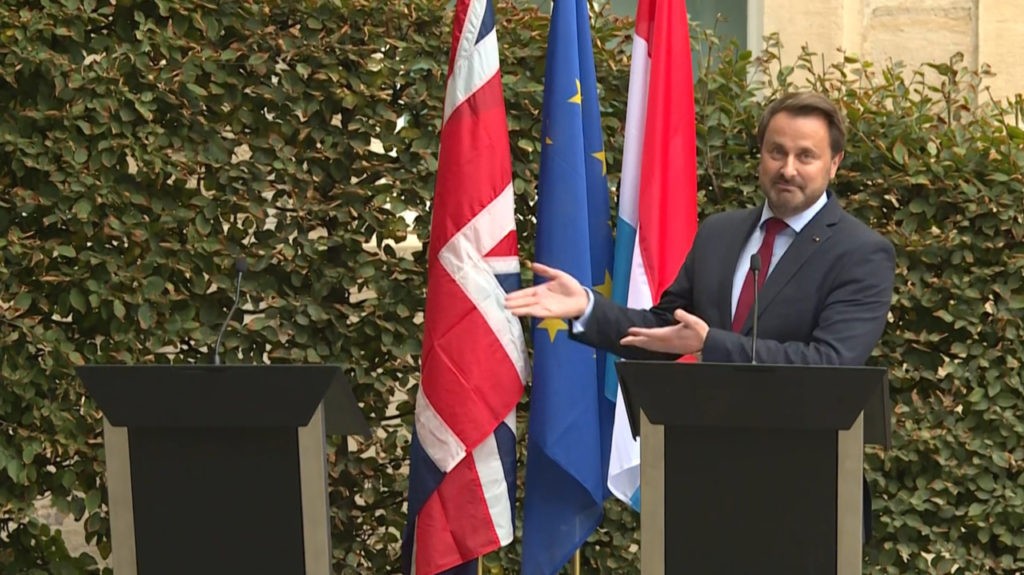 Luxembourg’s Prime Minister Xavier Bettel gestures to an empty podium as he speaks to the press after a meeting with the British Prime Minister, EU Commission President and officials in Luxembourg. (KILIAN FICHOU/AFP/Getty Images)

Speaking at the Carlton Club yesterday, the U.S. ambassador applauded Johnson’s political instincts, insisting he knew he was “walking into a trap”, according to the Telegraph report.

Woody Johnson reportedly said: “He knew this was a set-up. Of course he knew, but he’s British. He said, ‘What the hell. I can do this’.

“I thought the people in Luxembourg accomplished something that maybe even Boris couldn’t accomplish: show this is not where (the British) want to be, over there, when they treat us like that – your prime minister.”

Addressing a Conservative Foreign & Commonwealth Council lunch at the private members’ club in Pall Mall, the ambassador said  “some had cast doubt” on the British people’s decision to leave the E.U., but he reaffirmed “the U.S. administration believes it’s the start of a new golden era for the UK.”

He said: “The people who built the greatest empire, the people who held off the Nazis, who contributed so much to the progress of mankind, you can go down a long list – they don’t need a lecture from anybody on how to run their country, and that includes Brussels.”