The American Psychological Association (APA) has published a guide that instructs graduate programs in psychology to end language that refers to biological differences among individuals.

They want to replace it with gender inclusive terminology in order to provide a “safe learning environment” for transgender students.

The guide was authored by the APA’s Graduate Students (APAGS) subcommittee on Sexual Orientation and Gender Diversity.

The authors introduce the guide with the following statement:

Given the rise of anti-transgender and anti-LGBT actions (National Center for Transgender Equality, 2019), our committee feels that this guide is a timely and necessary resource to provide a safe learning environment for trans and gender diverse (TGD) students who continue to be marginalized in many aspects of their lives.

The guide contains an “Action Plan” in which the APAGS committee instructs graduate programs to “include pronouns as part of class introductions”:

“We don’t know someone’s gender pronouns from their appearance, so it’s important to ask,” the committee asserts, and adds:

There are times, however, when sharing pronouns can feel like disclosing one’s identity which may feel uncomfortable for some TGD students. It is important to normalize sharing pronouns while never forcing anyone to disclose their pronouns. It can also be helpful to emphasize that pronouns do not indicate someone’s gender identity and that students shouldn’t assume someone’s gender identity based on pronouns. When the instructor introduces themselves with their pronouns first, it can normalize the experience and set an inclusive and culturally sensitive tone.

The guide discourages announcing a student’s birth name in class “because this can be an embarrassing and uncomfortable situation for TGD students who have changed their name.”

The committee offers the following “short sample script” for professors to begin a class:

Hello everyone! Welcome! To start off today, we are going to do introductions. Please introduce yourself by stating your preferred name, gender pronouns if you feel comfortable doing so, and year/major. Your gender pronouns might be she/her/hers, he/him/his, they/them/their, or something else. It’s important that we all use the correct pronouns when referring to others. I’ll start by introducing myself. My name is _____ and I use (she/her/hers, he/him/his, they/them/their) pronouns. I’m a faculty member in the counseling psychology department…

The guide displays a table of terms that reflect biological differences – which the authors recommend to avoid – versus the committee’s preferred gender-inclusive terms: 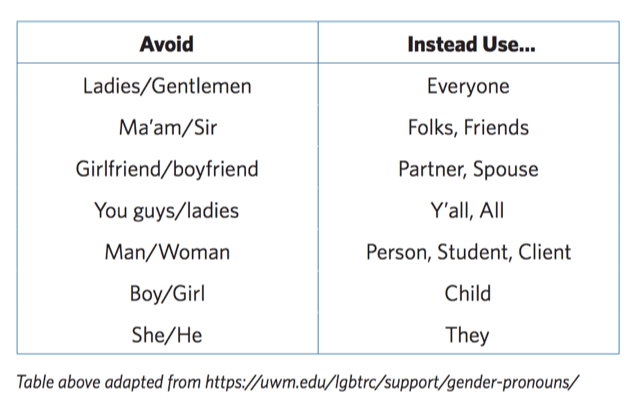 The authors of the guide recommend individuals “practice using they/them as singular pronouns on a regular basis,” even though such usage may be grammatically incorrect:

“For example, ‘They are a student in my class,’” the committee suggests. “Or, ‘Each student should sign up for a presentation date before they finish the book.’”

“It is hard to relearn the use of this pronoun, which is why practice is essential!” APAGS states.

A sample form instructs asking the individual for “legal name” and “preferred name.” Instead of sex – male or female – the guide suggests the question, “What sex were you assigned at birth?” and provide the choices of “female, male, or intersex.”

Individuals completing a form might also be asked, “Which best describes your current gender identity?” The options provided are:

The guide also instructs university psychology departments to “include trans and queer authors on syllabi,” and to “center queer and trans people of color (QTPOC) in discussions about transness.”