President Donald Trump is converting the former “country club” GOP to the party of blue-collar Americans, according to an article in the Wall Street Journal:

Mr. Trump accelerated the movement of working-class voters into the Republican Party, creating a GOP that now represents more middle- and lower-income Americans … He has reframed much of the Republican agenda to appeal to these voters, particularly on trade, immigration and foreign affairs, in many cases upending 40 years of GOP policy.

In turn, the Democrats are increasingly the party of America’s wealthiest cities, post-industrial business leaders, and the “woke” professional class.

This political transformation, however, means that U.S. college graduates have few friends in Washington, D.C., to protect their economic interests in a shifting economy.

The WSJ provides the data:

But the shift also exacerbates the average voter’s tension with the GOP’s wealthier leadership class. The WSJ reported:

The most ardent Trump supporters agree with Mr. Trump’s restrictive positions on immigration and his opposition to efforts to address climate change, among other policies. The party-supporting Republicans believe immigration helps the nation and that near-term action to fight climate change is needed. 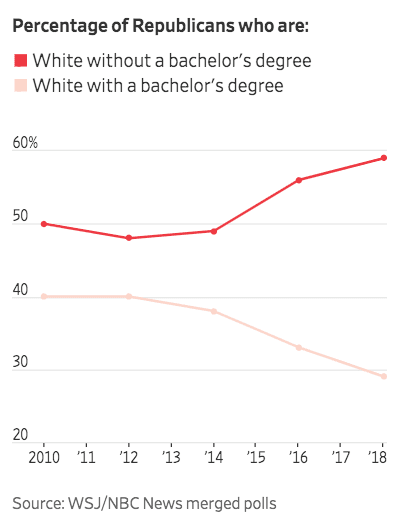 The WSJ did not discuss the impact of this shift on many college graduate voters who are drifting away from the GOP because of their sympathy for left-wing civic issues, such as global warming, sexual deregulation, and pro-diversity policies.

But these college graduate voters have yet to find economic allies in the pro-migration Democratic Party.

For example, Sen. Elizabeth Warren is calling for more immigration of “students,” which is likely a reference to young college graduates who will compete against American graduates:

We need a pathway to citizenship for the people who are here and here to stay … We need a path — not just for DREAMers — but also a path for grandmas, and for little kids, and for people who came here to work on farms, and for students who overstayed their visas. We need a path that is fair and achievable. Bring people out of the shadows. It is good for all workers, and we need to get them into our unions.

Similarly, Sen. Dick Durbin is touting legislation that would allow U.S. and Indian companies to bring in roughly 100,000 Indian white-collar workers each year.

The San Francisco ride-hailing giant revealed in a California employment-department filing this month that it is laying off nearly 400 workers at its offices in the city and in Palo Alto. The filing showed software engineers at the firm were the hardest hit, with more than 125 people cut loose.

Meanwhile, Uber this year received federal government approval for 299 new H-1B visas — work permits intended for jobs requiring specialized skills — compared with 152 in 2018 and 158 in 2017, according to data from U.S. Citizenship and Immigration Services. It is unclear whether Uber plans to use all those visas or when new H-1B workers might be brought on. The visas typically cost thousands of dollars each to obtain.

“When they’re laying off, they shouldn’t be using H-1Bs at all, or maybe sparingly at best,” said Ron Hira, a Howard University professor who studies the use of the visa by companies. “It runs totally contrary to the intent of the H-1B program.”

Some of the labor markets for American college graduates are flooded with immigrants, admitted David Bier, an advocate at the Cato Institute, which favors easy immigration by foreign graduates:

These investors get much support from some GOP legislators:

Watch GOP Sen. Mike Lee publicly urge Indian contract-workers to lobby US Senators for a bill offering fast-track citizenship to Indian grads if they take jobs (at low wages) from US grads. No GOP Sen. has rebuked him & no anti-GOP journos 'pounce.' Weird. https://t.co/A5VOsuyOVt

For the moment, Donald Trump’s administration is zig-zagging between the demands of its business allies and appeals from the swing-voting college graduate class.

(2/2) Moving and powerful. Lots of powerful competing interests, but we need to remember that the American immigration system is first and foremost supposed to be for the protection and benefit of America and Americans.

“The president has made no secret of the fact that he believes immigration, first and foremost, is set up to work for America — that means economically and for the people here,” Cuccinelli told reporters at a press breakfast organized by the Christian Science Monitor.

Is there some perfect [balanced] target point in every industry? Maybe there is, but we’re never going to be able to know it. So which side do you err on? And he has repeatedly emphasized how important it is to protect U.S. workers. Now’s he been clear with me, as well, and you all have heard him say it: he wants to see economic growth and dynamism. And that means, you know, growing companies needing to fill slots. So we’re just in a constant battle to balance those things.