Democrats joined with immigrants and refugee rights activists at the Capitol last week to introduce a bill that would create a federal bureaucracy for the express purpose of bringing more people into the United States and helping to resettle them.

The New Deal for New Americans Act would “establish a National Office of New Americans in the Executive Office of the White House to promote and support immigrant and refugee integration and inclusion and coordinate efforts of federal, state, and local governments to support social, economic, and civic integration of immigrants and refugees.”

The bill if it becomes law would “ban deportations based on public charge determinations, and increase federally funded immigration services like English classes and workforce training,” Fortune magazine reported.

Further, Democrats and activists want to raise the cap for refugees from the Trump administration current limit of 18,000 annually to 110,000 and freeze immigration application fees — also reversing a Trump administration increase in cost to come into the United States to benefit the U.S. economy and its citizens.

At a press conference to introduce the legislation, Rep. Grace Meng (D-NY), one of the sponsors of the bill, did not say how the influx of people who impact Americans in the jobs market. 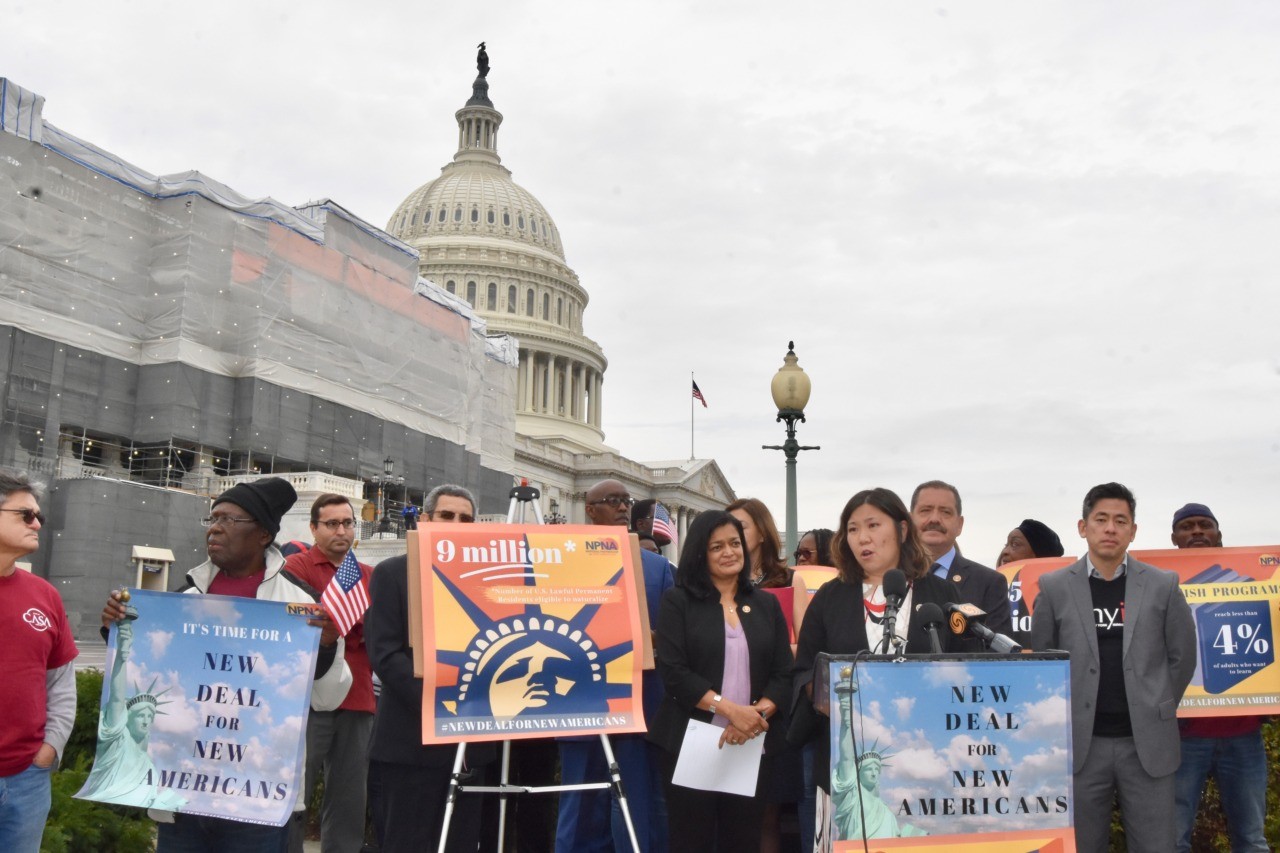 Rep. Grace Meng (D-NY) spoke at a press conference on Capitol Hill last week to introduce a bill that would create an executive branch office to welcome immigrants and refugees. (Penny Starr/Breitbart News)

Meng also said she and other Democrats behind the bill – Reps. Pramila Jayapal (D-WA), and Rep. Jesús “Chuy” García (D-Ill) – were still waiting from a score from the Congressional Budget Office (CBO) on how much it would cost American taxpayers.

The issue of immigrants who are here illegally or how to stop the flow of illegal immigration into the country was not addressed at the press conference.

“This is a critical bill at a critical time,” Jayapal said. “This is about who is here and how we make sure they get what they truly need.”

“Trump is closing the doors on people who have the right to be here,” Garcia said. “We as a country are better than that.”

“The treatment immigrants currently receive is not representative of our values,” Garcia said.

Eva Millona, director of the Massachusetts Immigration and Refugee Advocacy Coalition, repeated the popular talking point on the left about the need for more foreign workers.

“This bill is extremely important,” Millona said. “As the native born population ages, immigrant workers will be crucial to our economy.”

“It is quite simple,” Millona said. “America needs immigrant workers.”

But as Breitbart News reported earlier this year foreign workers have now outpaced American workers in terms of job growth for at least half a year, Bureau of Labor Statistics (BLS) data reveals:

While native-born Americans did not increase their labor participation rate at all year-to-year, foreign-born workers saw a 1.22 percent increase in their labor participation rate. Likewise, the number of foreign-born workers in the civilian labor force increased more than five times the number of new native-born American workers who are now in the labor force.

A report from the Center for Immigration Studies using federal data shows that mass immigration encourages discrimination against American workers.

“You really have to be out of touch with reality to argue that there are no negative effects of immigration on native workers,” said Jason Richwine, a statistician who studied the issue for the Center for Immigration Studies.

Some of the other features of the bill include: