The individual who some news outlets have alleged is the “whistleblower” in the impeachment inquiry into President Donald Trump was reportedly the guest of former Vice President Joe Biden at a State Department dinner in October 2016.

Last week, RealClearInvestigations reported the alleged identity of the “whistleblower” as a CIA analyst who had worked with Biden, and who had interacted at the White House with a person who approached Ukraine for dirt on Trump during the 2016 elections.

Biden co-hosted the banquet with former Secretary of State John Kerry for then-Italian Prime Minister Matteo Renzi. [Eric] Ciaramella, who is of Italian heritage, was among the U.S. officials who accepted an invitation.

Ciaramella, 33, is listed among dozens of other people who were invited to the October 2016 event hosted by Biden under the category “WH EOVP,” or the White House Executive Office of the Vice President, in an unclassified State Department document released through the Freedom of Information Act. An “A” appears next to his name, indicating he accepted the invitation.

RealClearInvestigations named Ciaramella as the whistleblower last week. The report cites U.S. officials who said the invite to Ciaramella, “a relatively low-level GS-13 federal employee, was unusual and signaled he was politically connected inside the Obama White House.” 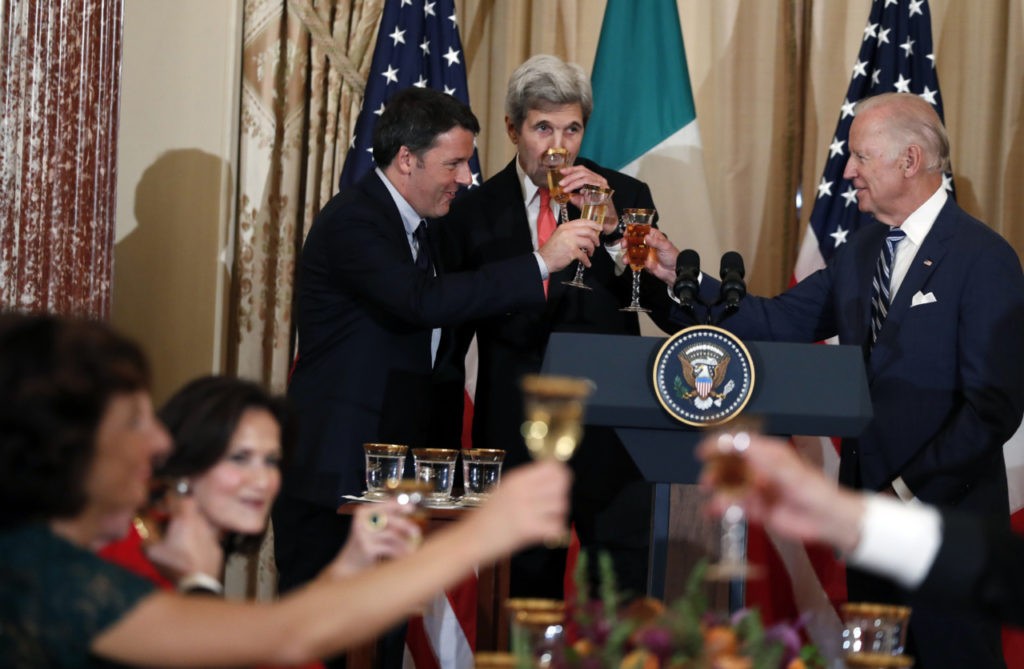 Italian Prime Minister Matteo Renzi, left, reaches to tap glasses with Vice President Joe Biden, during a toast by Secretary of State John Kerry, center, during a luncheon in his honor, Tuesday, Oct. 18, 2016, in the Ben Franklin Room at the State Department in Washington. (AP Photo/Alex Brandon)

Republicans want the “whistleblower” to testify; Democrats, who once demanded that he be given the chance to do so, now want to shield him from public scrutiny.

The “whistleblower” claimed the president had tried to force the Ukrainian government to dig up dirt on Biden during a phone call between Trump and Ukrainian President Volodymyr Zelensky. The White House released the rough transcript of the call, which supporters say contradicts the claims of the “whistleblower.”