Women who live in America’s suburbs are supporting President Donald Trump’s re-election bid, says a new report at OpenSecrets.org, that shows Trump is benefiting from a surge in large-dollar donations from women in suburbs – more than any Democrat candidate.

While mainstream media are reporting some polls that suggest Trump is losing the support of women, the report by Open Secrets, part of the Center for Responsive Politics, shows the president has over 10,500 large-dollar contributions from women in suburbs, and has received $8,293,135 from them – the largest amount than any of the Democrat 2020 candidates. 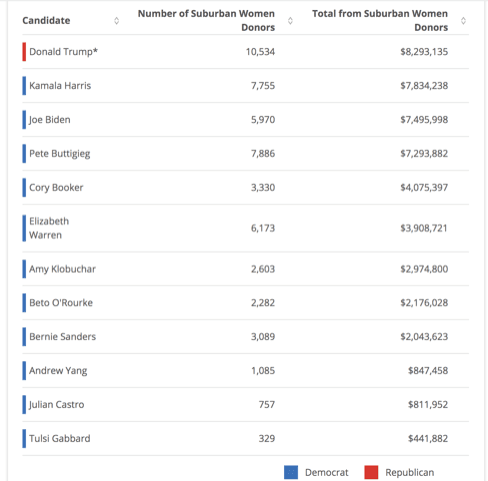 “Suburban women, who power a significant electoral battleground, are a key demographic for 2020,” wrote Grace Haley at the research group that tracks money in U.S. politics. “Since Trump’s inauguration, more than 7,000 women in suburban districts have given large-dollar contributions to his campaign. That totals $8 million, the most of all candidates.”

Paul Bedard at the Washington Examiner, drew attention to the Open Secrets report.

He noted that 28 percent of Trump’s “itemized contributions” were from women in 2016.

However, the research group also observed that “Trump’s contributions from women are most certainly higher than $15 million” since the Trump campaign does not report demographic information about its small donors:

Campaigns are not required to itemize donations of $200 or less, so we do not have demographic information about Trump’s small donors giving to his joint fundraising committees with the Republican National Committee, Trump Victory and the Trump Make America Great Again Committee. An estimated 59 percent of Trump’s donations are from small-donors, so Trump’s contributions from women are most certainly higher than $15 million. Trump’s totals are underestimated more than the other candidates. Because Democrats are relying on ActBlue and the Republicans are not relying on the Republican equivalent WinRed as significantly, we only have most (not all) donor demographic data for Democratic small-dollar donors.

Amy Kremer, chairwoman of Women for America First and co-founder and chair of Women for Trump PAC, told Breitbart News it is “no surprise that women are contributing to the president’s campaign” since many women in suburbs have families and children.

“Women are focused on issues that impact our children and our families and President Trump is delivering results,” she said, adding that when women contribute to his campaign “it’s an easy donation when you know what you are going to get in return and this president has followed through on his promises, and his policies have been good for women and their families.”

Open Secrets noted the Trump campaign says there are often more suburban women supporting the president than reported because “the polling data does not account for suburban women who favor Trump but do not feel comfortable publicly saying so.”

Kremer agreed with this statement.

“Not all women who support the President may be vocal about their support, but they are quietly doing their share to ensure another four years of America First with President Trump,” she said.