Joe Biden’s campaign is attempting to spin the narrative around his son’s work in Ukraine with a hastily created website as the House Democrats’ impeachment inquiry continues to heat up.

The former vice president, who is already trying to salvage his foreign policy credentials after revelations about Hunter Biden’s wheeling and dealing overseas, launched a new website on Thursday to spin the narrative emanating from the inquiry.

The site, in particular, attempts to push back on allegations that Hunter Biden’s service on the board of directors of Burisma Holdings, a Ukrainian oil and gas giant, intersected with the former vice president’s political influence in eastern Europe. To that end, the site aggregates news stories from maistream media outlets such as NBC, ABC News, and The Washington Post  portraying the Biden’s conduct as ethical—under a “facts” header.

The site, which is titled ‘Just the Facts, Folks proclaims:

There’s a lot of misinformation and lies out there, so welcome to the one stop shop for the facts about Joe Biden. Stay informed about the truth Trump and his special interests are trying to distract from.

Despite the lofty goal, the website has the appearance of a campaign ad rather than a fact sheet. Rather than addressing the alleged conflicts of interest between Hunter and Joe Biden head on, the site attempts to pass off the opinions of partisan figures, like former Obama administration speechwriter Jon Favreau, as “facts.” Added to the mix is that half the front page is devoted to television ads the Biden campaign has recently launched, most of which deal in generic campaign themes.

The site also seems to have been thrown together hastily. An outside search by Breitbart News was able to confirm the website’s domain was only purchased on November 5, a little more than a week before the House Intelligence Committee was set to begin its impeachment inquiry. The quick timeline was evidenced by a number grammatical errors still visible hours after launch.

The site reads when elaborating on why the former vice president is running:

At this defining moment in our nation’s history, it’s going to take Joe Biden’s strong leadership to defeat Donald Trump and unite America overseas, separating families at the border, protecting corporations and the wealthy over the middle class, and threatening our democracy by pressuring foreign nations to interfere in our elections. 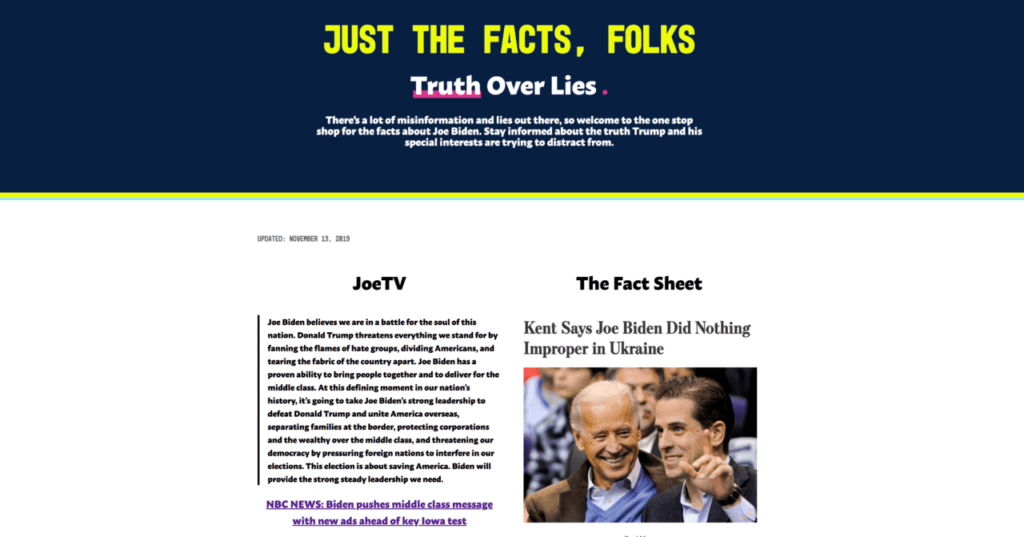 It is unclear what the Biden campaign was attempting to say with that paragraph. Requests for comment were not returned by press time.

The website’s launch comes only one day after the impeachment inquiry into President Donald Trump held its first first public hearing. Even though the hearing was built up as a history-making event—only the fourth time in history Congress has weighed impeachment against a sitting president—it largely backfired on Congressional Democrats.

Most notably, one of the Democrats’ star witnesses inadvertently made the argument that Hunter Biden’s work for Burisma should be probed because of the appearance of conflicts of interest and the company’s general perception of being corrupt.

Deputy Assistant Secretary of State George Kent, who is vital to the Democrats proving Trump’s conduct rose to the level of impeachment, admitted under oath that U.S. officials had been urging the Ukrainian government for some time to explain why an investigation into Burisma was shut down. The state department official further admitted he and his colleagues believed Burisma’s founder, Mykola Zlochevsky, “had stolen money,” and the Ukrainian prosecutor charged with investigating him shut down the case after taking a bribe.

Kent answered when asked if he was in favor of reopening the probe into Bruisma and Zlochevsky:

I think since U.S. taxpayer dollars are wasted, I would love to see the Ukrainian prosecutor general’s office find who the corrupt prosecutor was that took the bribe and how much was paid.

Kent also asserted that Burisma had a “mixed business reputation,” and Hunter Biden’s decision to join its board of directors had led him to raise concerns with former Vice President Joe Biden’s office in 2015.

“In a briefing call with…the office of the Vice President…I raised my concern that Hunter Biden’s status as a [Burisma] board member could create the perception of a conflict of interest,” Kent testified.

At the center of controversy is how and why Hunter Biden secured the appointment, which at times paid more than $83,000 a month. As Peter Schweizer, senior contributor at Breitbart News, detailed in his book, Secret Empires: How the American Political Class Hides Corruption and Enriches Family and Friends, Hunter Biden had no prior experience with either the energy industry or Ukraine before joining Burisma in April 2014.

Adding to concerns is the fact that, at the time Hunter Biden joined Burisma, the company was seen as actively courting western leaders to prevent further scrutiny of its business practices. The same month Hunter Biden was tapped for the group’s board, the government of Great Britain froze accounts belonging to Zlochevsky under suspicion of money laundering.

Zlochevsky, a former Ukrainian minister of natural resources, would later be accused of corruption for using his office to approve oil and gas licenses to companies under his control. A Ukrainian official with strong ties to Zlochevsky admitted in October the only reason that Hunter Biden secured the appointment was to “protect” the company from foreign scrutiny. The claim has credence given that at the time, Joe Biden, as the sitting vice president, was tasked with leading the Obama administration’s policy towards Ukraine in response to Russia’s invasion of Crimea.

It is in the context of Burisma and Zlochevsky’s legal troubles that Joe Biden’s political influence has raised the most red flags. The former vice president has particularly drawn questions over his conduct in demanding the Ukrainian government fire its top prosecutor, Viktor Shokin, in 2016.

Joe Biden, who has publicly bragged about the firing, reportedly threatened to withhold more than one billion dollars in U.S. aid if the Ukrainian government did not remove Shokin. He has claimed the demand came from then-President Barack Obama, who had allegedly lost faith in the prosecutor’s ability to tackle corruption.

Unofficially, though, it was known that Shokin was investigating both Burisma and Zlochevsky for public corruption. It is uncertain if the probe extended to Hunter Biden, although Shokin has recently admitted that prior to his ouster he was warned to back off the matter. Regardless of what occurred, Shokin’s successor, who is now himself being investigated for public corruption, dropped the investigation into Burisma and Zlochevsky.

Biden’s new website, though, made no mention of those facts on Thursday. Instead the website points to a handful of tweets backing up the former vice president’s side of the story, including the one from Favreau.

“A reminder that Joe Biden’s push to get the corrupt Ukrainian prosecutor fired, which was the position of the U.S. government and basically the entire global community, was a move that INCREASED the chances that Burisma would be investigated,” the former Obama speech writer stated.