Schiff’s 300-page impeachment report, released Tuesday afternoon — less than 24 hours before the House Judiciary Committee opened impeachment hearings — alleged that Giuliani was in contact with the Office of Management and Budget (OMB), which placed a temporary hold on U.S. aid to Ukraine, as part of an alleged scheme to pressure Ukraine to investigate 2016 election interference as well as former Vice President Joe Biden and his son, Hunter.

Specifically, the report alleges that Giuliani was in touch with Ukrainian sources who were providing him false information about then-U.S. Ambassador Marie Yovanovitch, as well as Ukrainian interference in the 2016 U.S. elections and Hunter Biden’s board role at a corrupt Ukrainian gas company, Burisma. The report claims that Yovanovitch was an obstacle to Trump and Giuliani’s efforts to use Ukraine in support of the President’s reelection.

In support of those claims, the report includes never-before-seen phone records that document calls between the White House and Giuliani, as well as between Giuliani and Intelligence Committee Ranking Member Devin Nunes, among others, including journalist John Solomon. (Nunes, who said Wednesday that he was not discussing anything related to Yovanovitch and Ukraine, claimed Schiff violated his rights and that he is preserving “all legal options.”)

Several calls in the logs reprinted in the report are described as being between Giuliani and the OMB. However, the White House said Thursday, Schiff has the wrong number: no one ever called Giuliani from OMB, or vice versa. 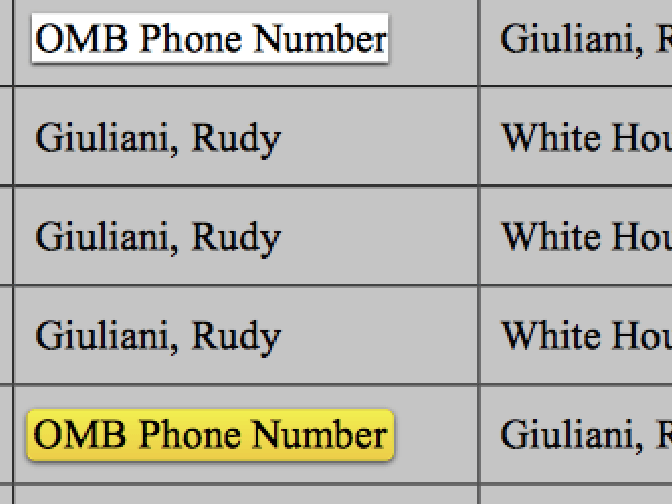 Philip Wegmann of RealClearPolitics reported that Schiff and his impeachment investigators mistook a generic number generated by the White House switchboard to mask outgoing calls for an actual OMB telephone number:

Apparently Schiff and his staff believe the 395 prefix that showed up on the phone records subpoenaed by House Democrats from AT&T and Verizon belongs only to phones in the OMB offices, something that Republican sources say isn’t accurate.

“This is yet another attempt to use deceit and media manipulation to attempt to undo the results of the last election and interfere in the next one,” a senior White House aide told RCP. “The number House Democrats are claiming is an OMB number is nothing more than a masking number that appears when White House staff dial out from the complex,” the White House aide added.

Congressional Republicans familiar with the record collection in the report are also deeply skeptical about this being a valid number registered to OMB. one member of Congress in regular contact with the president told RCP. “It is like the (202)226-9898 number from all congressional offices.”

Effectively, Schiff appears to have used congressional subpoena power to spy on the phone calls of a member of Congress, a journalist, and the president’s lawyer in making claims that are unproven and, at least in part, untrue.

Earlier Thursday, Speaker of the House Nancy Pelosi announced that she had directed the Judiciary Committee to draft articles of impeachment against Trump, relying heavily on evidence produced in Schiff’s impeachment report.