The House quietly passed a bill on December 3 to crack open a backdoor route for wealthy Chinese to buy their way into U.S. citizenship by lending money to the U.S. real estate industry.

“Congress is getting duped. … [The bill is] creating a new path for Chinese people,” said one Capitol Hill source.

Wealthy Chinese can buy “golden visa” citizenship from Portugal’s government in as little as 35 days. If House bill H.R. 565 is approved by the Senate and becomes law, then the new Chinese citizens of Portugal will be able to move into the U.S. by getting E-1 Treaty Trader or E-2 Treaty Investor renewable visas.

The bill may have a lot of hidden support in the Senate because it could provide a band-aid fix for the backlogged EB-5 program.

The EB-5 program allows wealthy foreigners to buy green cards by lending money to U.S. businesses, mostly to real estate investors. But the money inflow has shrunk because immigration law seeks to promote diversity among immigrants by capping the annual share of EB-5 green cards that can be bought by people from each country, such as China or India. This “country cap” rule means that new Chinese EB-5 buyers must wait more than ten years to get delivery of their backlogged green cards.

This delay is making it difficult for real estate groups to sell the EB-5 visa to Chinese lenders. The same backlog problem is also hindering the sale of green cards to wealthy Indians. Lobbyists for the EB-5 “Regional Centers” and the real estate industry are trying to kill off the country caps by lobbying for passage of Sen. Mike Lee’s S.386 bill, as well as for passage of EB-5 rewrite which is sponsored by three GOP Senators.

But the Portugal bill could allow Chinese EB-5 buyers to quickly migrate into the United States, where they can live and work while waiting a decade for the delivery of the EB-5 green cards.

David North, an expert at the Center for Immigration Studies, reported:

It was one of those furtive moves by which the open-borders types expand migration to the United States a little bit at a time, while drawing a minimal amount of attention, and certainly no public policy debates. I saw it reported only in a Law360 article that is behind a partial paywall.

Now the Treaty Traders (E-1) and Treaty Investor (E-2) program is not the largest of our nonimmigrant worker/investor programs — there were 60,438 admissions in 2018 according to the Department of State — but it operates, with a single exception, without much regulation.

The visas are handed out by diplomats overseas, and there is no States-side operation to monitor the program. One of the legal services writing about the program says that one can get the visa with an investment as small as $25,000. In years past I have heard that the sum could be as low as $10,000. It is said to be a system often used by people from Korea to open a dry cleaning business here.

The one restraint to the program is that it is limited to nations with whom we have a certain kind of treaty, and those nations do not include the big sending nations such as China, India, and Mexico.

The Portugal bill was slipped through the House, without a recorded vote, by Cicilline, with brief aid from Rep. Ben Cline (R-VA). “Foreign direct investment plays a significant role in the U.S. economy,” Cicilline said, adding:

Extending visas to Portugal not only gives Portuguese businesses an opportunity to invest in United States, but it’s a mutually beneficial relationship that promotes jobs in both countries and growth in the United States’ businesses and in our economy.

The bill was also backed by Democrat leaders, including Rep. Jerrold Nadler (D-NY), the chairman of the House Judiciary Committee. In a statement, he said:

The E-1 and E-2 visa programs boost our economy, by increasing trade and direct investment in the United States, and they also improve foreign relations with our allies. More than 80 countries already participate in these programs, including nearly all our foreign allies and trading partners. Yet Portugal, one of our closest and oldest allies, is not on the list.

Mr Speaker, as [Cicciline] said, currently the nationals of 84 countries are eligible for E-1 and or E-2 status. During fiscal year 2017, about 48,001 and E-1 and E-2 visas were issued. In the past, countries became eligible for these programs through treaties signed with U.S. However, in 2003, the judiciary committee reched an understanding with U.S. Trade Representative that no [similar] provisions were to be included in future trade agreements. Henceforth, legislation will be required to add countries. This bill would make Portuguese nationals eligible for E-1 and E-2 visas.

In the Senate, three GOP senators are pushing a new EB-5 bill that would a reform regulation set in place by the U.S. Citizenship and Immigration Services Agency. The bill would also steer the foreign EB-5 money away from rural areas and back towards real-estate projects in wealthy cities.

The bill is supported by Sens. Mike Rounds (R-SD), John Cornyn (R-TX), and Lindsey Graham (R-SC). The bill does not yet have enough support to pass the Senate, but Graham may try to include it in the 2021 funding bills.

The EB-5 bill is just one small part of Washington’s immigration policies which widen the wealth gap between coastal and heartland states.

For roughly 30 years, immigration has supercharged the economic growth in the coastal states. The vast supply of visa workers and legal immigrants arriving at Los Angeles International Airport, for example, means that California investors can ignore the pool of American labor in heartland states. The coastal investors can fund new job creation centers close to their neighborhoods, and fill those jobs with the legal immigrants who arrive daily from India, Africa, South America, and Asia.

The flow of government-supplied labor denies jobs, investments, opportunities, and wealth to many Americans in slower-growing, lower-priced, interior towns.

States, communities, and families expend a massive effort to birth, rear, and educate millions of young Americans — but coastal investors can ignore them and simply hire workers imported from around the world.

The shift in power from families to investors — and the resulting regional wealth gap — is spotlighted by a 2018 report from the Economic Innovation Group, “From Great Recession to Great Reshuffling”:

While the overall population in distressed zip codes declined, the number of rural Americans in that category increased by nearly 1 million between the two periods. Rural zip codes exhibited the most volatility and were by far the most likely to be downwardly mobile on the index, with 30 percent dropping into a lower quintile of prosperity—nearly twice the proportion of urban zip codes that fell into a lower quintile. 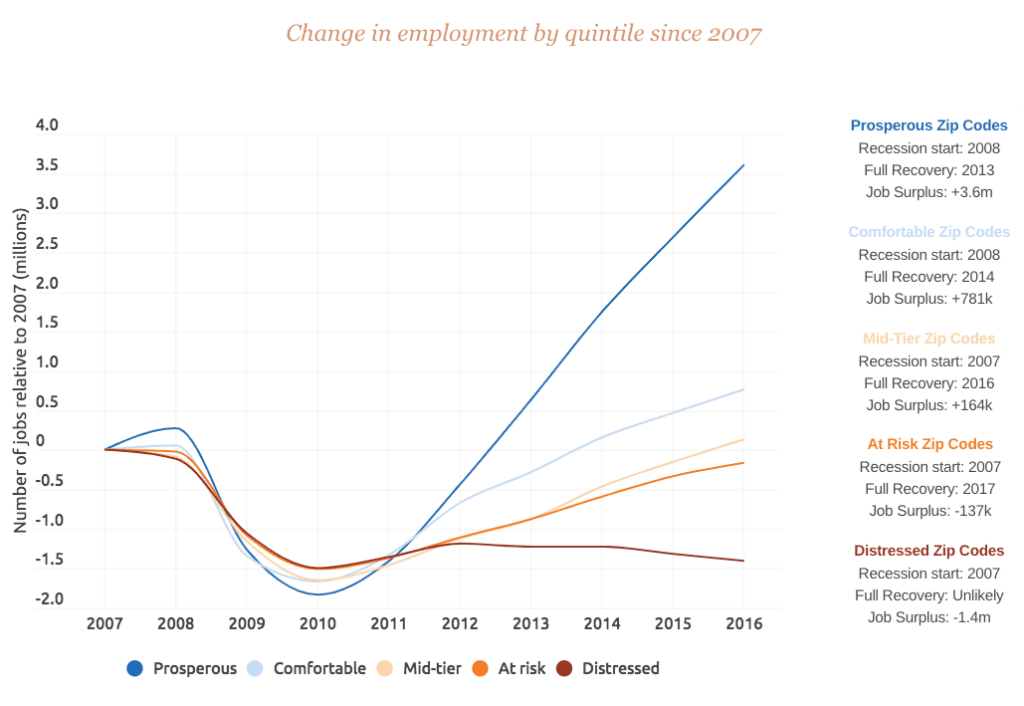