CLAIM: President Donald Trump only released the transcript of the Ukraine call after Democrats launched their impeachment inquiry.

VERDICT: FALSE. Trump said he would release it, then Democrats announced the inquiry.

House impeachment manager Rep. Hakeem Jeffries (D-NY) claimed during the Senate impeachment trial: “It was not until the launch of the House impeachment inquiry in late September and after intense public pressure that the rough transcript of the July 25 call was released.”

That is false. On Sep. 24, 2019, at 2:11 p.m. ET, President Trump announced that he had declassified the transcript of the Ukraine call and would release it the following morning.

I am currently at the United Nations representing our Country, but have authorized the release tomorrow of the complete, fully declassified and unredacted transcript of my phone conversation with President Zelensky of Ukraine….

….You will see it was a very friendly and totally appropriate call. No pressure and, unlike Joe Biden and his son, NO quid pro quo! This is nothing more than a continuation of the Greatest and most Destructive Witch Hunt of all time!

Nearly three hours later, at 5:00 p.m. ET, Speaker of the House Nancy Pelosi announced that she had launched an impeachment inquiry against the president. She did not want to wait half a day to see the evidence for herself; she and House Intelligence Committee Chairman Rep. Adam Schiff (D-CA) were ready to proceed based on accusations by the so-called “whistleblower,” who only heard about the call from others. 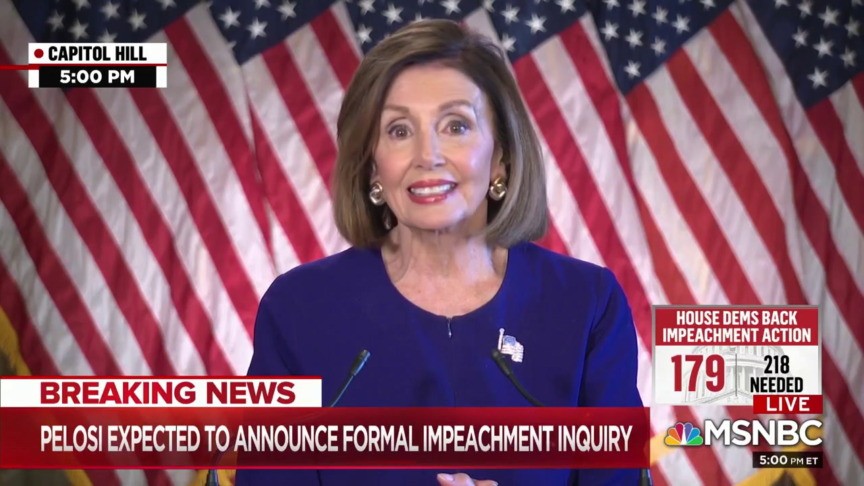 Pelosi: The House Is ‘Moving Forward with an Official Impeachment Inquiry’

The following day, the transcript was formally released, and showed that the whistleblower claims were largely inaccurate: Trump had not pressured Ukraine and had not mentioned the 2020 election, among other inaccuracies.

The order of events is important. It establishes clearly that Trump was not forced to release the transcript, and that Pelosi and the Democrats refused to wait for the evidence before impeaching the president.

Jeffries lied to create a sense of guilt that simply was not there.