At a Democrat press conference on Monday to mark the third anniversary of what they called President Donald Trump’s “Muslim ban,” Rep. Ilhan Omar (D-MN) claimed he was building an invisible wall to keep out people of one religion.

Exactly three years Trump achieved his stated campaign goal of banning a group of people and since the ban first went into effect it has deferred dreams, it has separated families and it’s deprived people of live-saving health care and blocked access to education.

Trump doesn’t just want a border wall. He’s creating an invisible wall of keeping out people around the world based solely on their religion.

The press conference was held to announce that Speaker Nancy Pelosi said on Monday that she would allow for the markup of HR 2214, a bill that would repeal the travel restriction Trump placed on several countries with ties to terrorism and would limit the president from putting in place future restrictions unless the administration provides evidence to justify the restriction and consults with Congress.

Pelosi said in a statement:

House Democrats continue to stand opposed to President Trump’s cruel, un-American travel ban in all of its iterations. In the coming weeks, the House Judiciary Committee will mark up and bring to the floor the NO BAN Act to prohibit religious discrimination in our immigration system and limit the President’s ability to impose such biased and bigoted restrictions.

Rep. Judy Chu (D-CA) introduced the National Origin-Based Antidiscrimination for Nonimmigrants Act (NO BAN Act) in the House and a Senate companion bill was taken up by Sen. Chris Coons (D-DE).

Coons said the “Muslim Ban” was the “intentional use of cruelty in our immigration policy.” 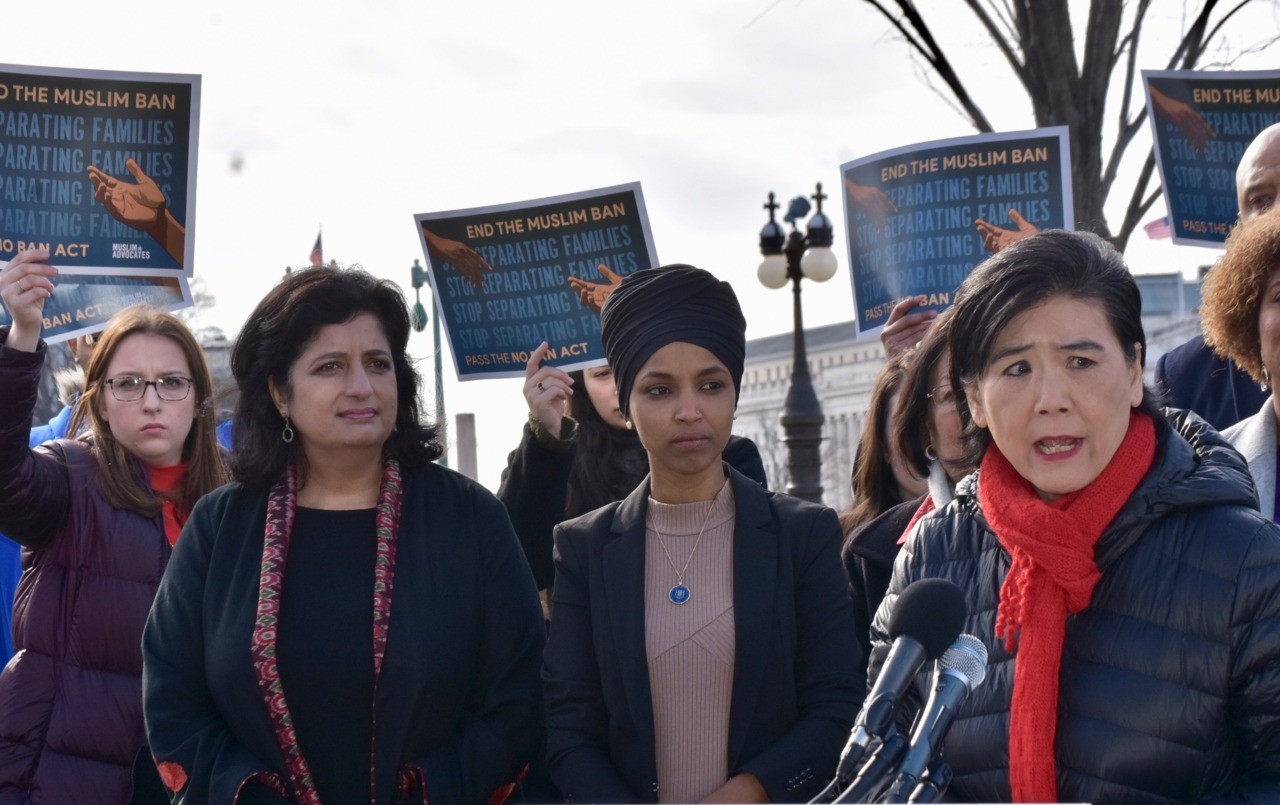 “It is essential that we take away the president’s power to put prejudice into policy before more countries and more families are impacted by this hateful ban,” Chu said.

The U.S. Supreme Court ruled in 2018 on a the third version of Trump’s executive order, which applied to people from Iran, Libya, Syria, Somalia, Yemen, Venezuela, and North Korea but did not include Sudan and Iraq as the first version did.

Democrats and leftist activists also criticized what is said to be Trump’s plans to add additional countries to his travel ban at the press conference.

“Trump confirmed Tuesday in an interview with the Wall Street Journal from Davos that he is trying to add additional nations to the travel ban, but declined to list the countries,” Politico reported.

Some of the organizations that support the Democrat legislation and who attended the press conference were: Farhana Khera, executive director of Muslim Advocates; Vanita Gupta, president and CEO of the Leadership Conference on Civil and Human Rights; Fatima Goss Graves, president and CEO of the National Women’s Law Center; Rabbi Jason Kimelman-Block, director of Bend the Arc Jewish Action; and Sheila Katz, CEO of the National Council of Jewish Women.