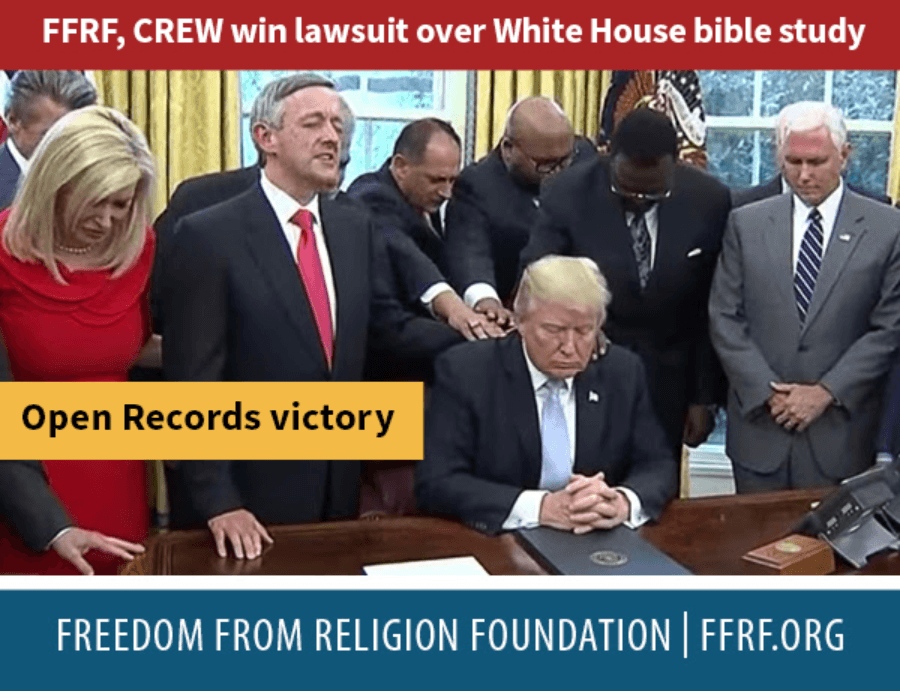 The Freedom from Religion Foundation and the Citizens for Responsibility and Ethics in Washington announced last week that the federal agency will pay $17,800 to settle the suit, which revolved around a Freedom of Information Act request designed to hold government accountable but not intended to infringe on individual privacy.

According to the federal government, there are nine exemptions for gaining information through a FOIA, including when providing that information “could reasonable be expected to constitute an unwarranted invasion of personal privacy.”

But the leftwing atheist groups believe differently, citing its right to have information about private and voluntary Bible studies:

FFRF and CREW filed suit in January 2018 in the U.S. District Court for the District of Columbia, alleging HUD’s pattern and practice of denying fee waivers on FOIA requests where disclosure of the documents was “likely to cast the agency or HUD secretary in a negative light.”

FFRF and CREW have subsequently received the desired documents. In the settlement, HUD has agreed to address the remaining issues by offering two sessions of in-person mandatory fee waiver training for the FOIA office, issuing updated fee waiver guidance for employees, and paying costs and attorneys fees to the plaintiffs ($14,400 to CREW and $3,400 to FFRF).

The announcement said that in addition to getting information about Bible studies at HUD but also sought documentation about Carson attending an event at the Museum of the Bible.

“Government needs to work in sunlight,” FFRF Co-President Dan Barker, said in the announcement. “Our lawsuit has ensured that should be happening in the future at HUD.”

The Christian Post also reported on the lawsuit settlement:

FFRF, which advocates for a strict separation of church and state, has been critical of the weekly Bible studies organized by Capitol Ministries and pastor Ralph Drollinger since the beginning of the Trump administration in 2017.

FFRF has claimed that weekly Bible study is a “big waste of taxpayers” and has called for cabinet members to “study the Bible in your private capacity, not in your official capacity and at your government desk.”

FFRF targeted Carson and HUD most recently after the media outlets reported that Drollinger had linked the coronavirus and homosexuality in a blog that surfaced in March. Drollinger has said his theological writings were misrepresented.

“We should be seeing much more media outrage over these activist groups who continuously abuse legal protections in place for the media, but we don’t,” Matt Schuck, HUD spokesman, told Fox News.

Although the Trump administration had said no Bible studies have been held at the White House, aside from Carson, several other cabinet members are listed as Bible study “sponsors,” according to the Capitol Ministries website including Secretary of State Mike Pompeo, Secretary of Education Betsy DeVos, NASA Administrator Jim Bridenstine, Vice President Mike Pence, and White House Chief of Staff Mark Meadows.

Dozens of members of the House and Senate also are listed as sponsors on the website.

“Having enough perspective to realize that people who disagree with you are not automatically your enemies and learning how to treat each other and the constituents of this nation with respect will go a long way toward healing our nation,” Carson said in a statement posted to the website. “The work of Capitol Ministries is interwoven into those goals.”