The deep blue state of Illinois is beginning to revolt against the nation’s strictest coronavirus lockdowns even as those in charge seek to strengthen their power.

Some of the more outrageous examples of overreach are seen in the City of Chicago, where Mayor Lori Lightfoot has fenced in the city’s extensive lakeshore areas and even created newly designated no parking zones around churches to prevent worshipers from attending services.

Last Sunday, the city’s first gay mayor sent the Chicago Police Department (CPD) out to erect new signs around the neighborhood of Philadelphia Romanian Church to suddenly create long stretches of new “No parking/tow warning” zones around the building.

Lightfoot also sent the CPD to prowl around outside several of the city’s churches to hand out parking violations, Chicago’s CBS affiliate reported.

The mayor’s campaign against churches comes on the heels of statements by several church officials across the city saying they had no intention of submitting to the mayor’s orders to shut down their houses of worship. 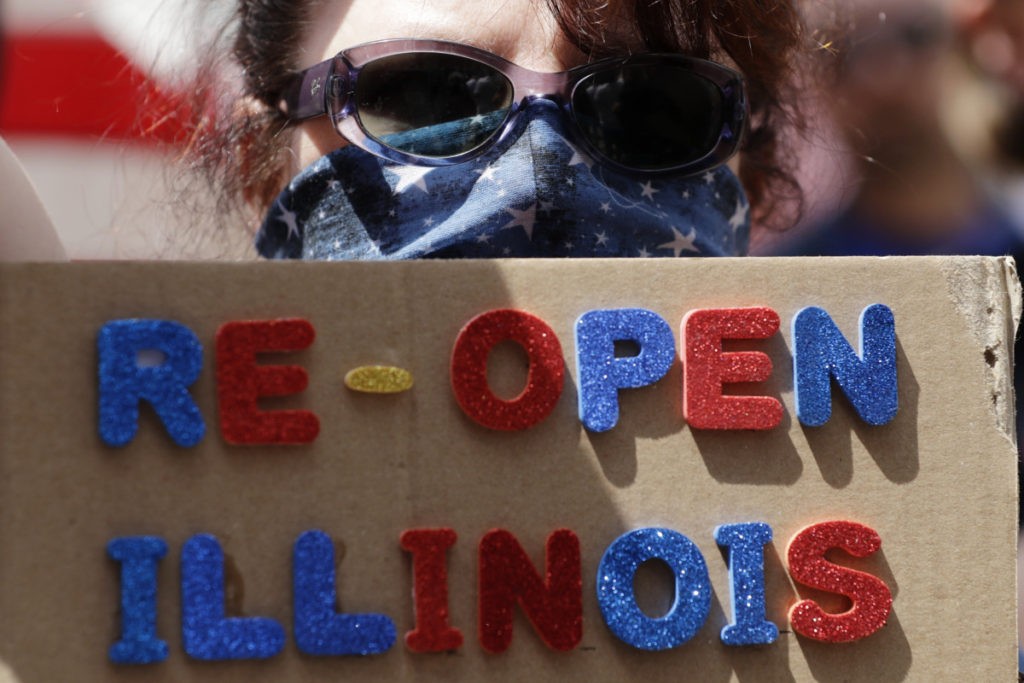 A protester holds a sign during a rally calling for the state to reopen the economy outside the Thompson Center in downtown Chicago. (AP Photo/Nam Y. Huh)

The Windy City is not the only Illinois jurisdiction instituting the draconian lockdowns that are riling citizens. The state’s novice Governor, J.B. Pritzker, has also dabbled in harsh lockdowns that have stifled the state.

As a result, the Windy City citizens are not the only Illinoisans who have revolted against the Democrat-enforced lockdowns.

A growing number of county and municipal officials are coming out in opposition to Gov. Pritzker’s seemingly arbitrary orders. Pritzker ruled businesses that violated his orders could be handed a prison sentence of up to a year for refusing to obey him. But many balked at the order.

Sheriff James Mendrick of DuPage County, Illinois, for instance, told his constituents he had no intention of enforcing Pritzker’s order to fine and arrest violators of the gov’s lockdown orders.

“I just can’t do this anymore. I stand with our citizens and businesses of DuPage County who have offered no trouble or no resistance to any rule we put upon them, no matter how strange.,” Sheriff Mendrick wrote in a Facebook post.

“I will not victimize lawful residents of DuPage County trying to put food on their children’s table. I’m so proud of our DuPage citizens who have done everything right from the beginning. All I can say is thank you,” he added.

As Sheriff, I feel that my own 1st amendment constitutional right to free speech has been completely trampled on by a…

Kendall County Sheriff Dwight Baird joined Mendrick and let his county know that he had no intention of sending police to break up gatherings, take out weddings, or shut down businesses because in his opinion, “the Governor’s Executive Order is not a law.”

Gibson City, a town in central Illinois, also announced they would not be enforcing Pritker’s orders.

“After careful consideration, the Gibson City Police Department will not be making any criminal misdemeanor arrests of individuals or business owners for violations of temporary rules of Executive Orders, the town said in a statement on Wednesday.

In addition, downstate Madison County reopened its businesses despite the orders.

In reply to these officials, Gov. Pritzker warned he would send the state police in to enforce his rules.

“Counties that try to reopen in defiance, may not be reimbursed by FEMA for damages they cause because they ignored the law,” Pritzker said adding, “Local law enforcement and the Illinois State Police can and will take action.”

A gym owner in Moline, a city on the border with Iowa, straight west of Chicago, reopened his business on Monday in direct defiance of Pritzker’s orders.

Madison County Board Chairman Kurt Prenzler helped usher through a resolution that “basically declared all businesses and churches essential.”

“I did the Zoom classes for a while. Rented out all my equipment and, you know, you reach a point where enough is enough, and somebody’s got to say something,” said Chris Ninotta, owner of Omni Strength. “I can’t do it any longer. I’m a single father, and that’s where my loyalty lies, and there’s no man or government on earth that’s gonna tell me I gotta, you know, do this.”

In another case, Kevin Promenschenkel, owner of Poopy’s biker bar in Savanna, Illinois, filed a lawsuit after his state liquor license was threatened because people used his picnic tables – spaced more than 10 feet apart – to eat their takeout orders.

The above actions by business owners and government officials noted above are only a handful of the examples of residents and officials revolting against the Illinois governor’s autocratic orders.