ROME — Thousands of demonstrators gathered in Rome Saturday to protest an extended national “state of emergency” for the coronavirus, which allows the government to issue decrees outside of the legislative process.

Much of the thrust of messages painted on signs and banners denounced the long-term economic effects of Italy’s lockdowns as well as an alleged “strategy of terror” employed by government-controlled media and an ongoing “health dictatorship” used to thwart the democratic process.

“We are not deniers, we are against the health dictatorship,” declared one sign, while another announced: “We do not deny anything except the strategy of terror that has been carried out in recent months.” 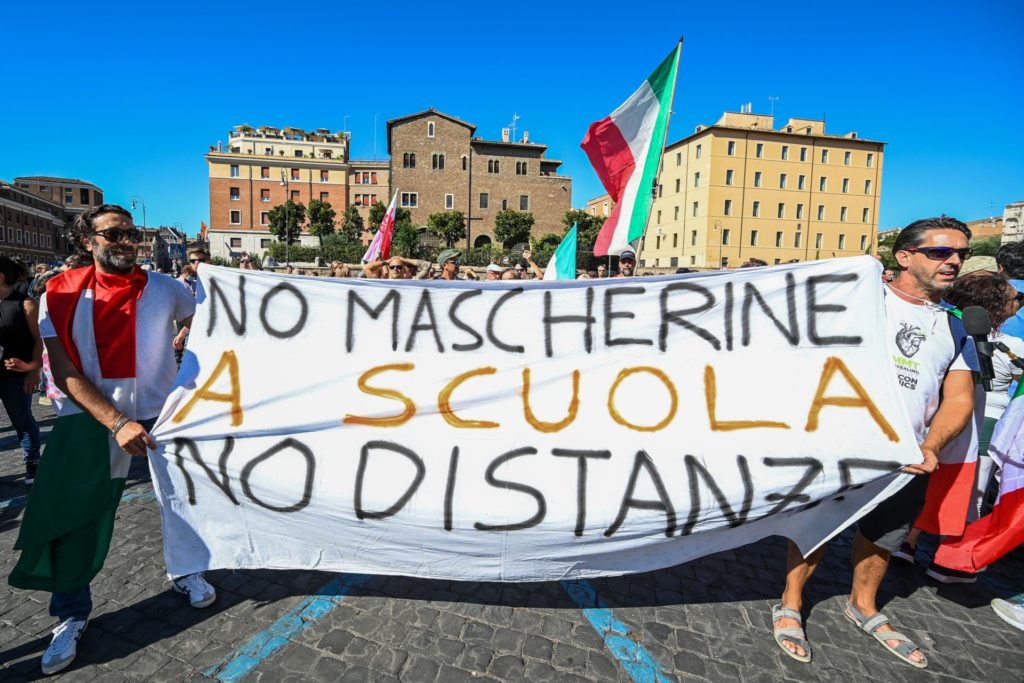 Protesters from “No Mask” movements protest against the government’s health policy on September 5, 2020 in Rome during the COVID-19 infection, caused by the novel coronavirus. The banner reads “No mask at school, no distancing”. (VINCENZO PINTO/AFP via Getty Images)

Media noted that most of the protesters were not wearing masks or observing social distancing as they filled the Bocca della Verità square in central Rome.

From the stage, organizers decried plans for a mandatory coronavirus vaccine, while accusing the left-wing government of “intimidating people.”

“Trump is with the Italian people, I bring you his greetings,” shouted Alicia Erazo, CIDHU International High Commissioner for Human Rights for Europe, Asia and Oceania. “I do not recognize myself in the UN because it does not enforce the rights of women and children. We hope these antics end soon.”

“Why am I in the square? I am a father of three children and because I am a worker,” declared Giuliano Castellino of the Forza Nuova party from the stage. “Because lockdowns and nefarious policies have starved us.” 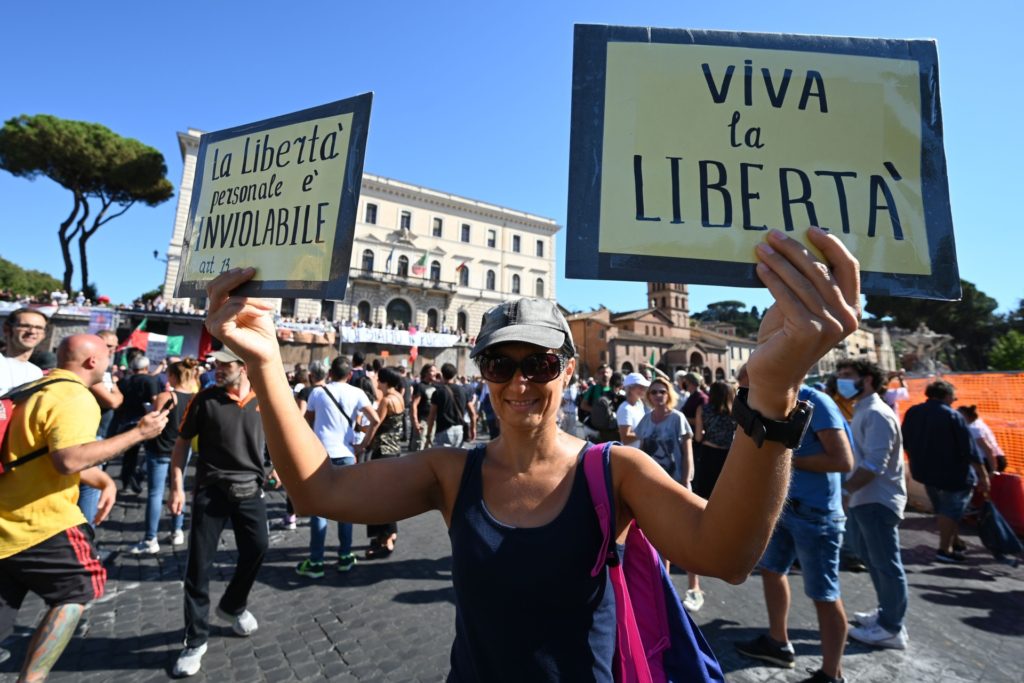 A woman holds placards reading “Personal freedom is inviolable” and “Long live freedom” as protesters from “No Mask” movements protest against the government’s health policy on September 5, 2020 in Rome during the COVID-19 infection. (VINCENZO PINTO/AFP via Getty Images)

“Shame on you all, scammers. I am a free man like all those here today,” he added. “I do not wear a muzzle.”

The leader of the leftwing Partito Democratico (PD) Nicola Zingaretti denounced the protests on Twitter, calling the marchers “Deniers.”

“Stop deniers! The demonstration is a mistake,” he wrote. “You still have time to cancel it. Respect victims, families, health workers, the sacrifices of the Italians. COVID is not denied, it is fought. I ask all politicians to distance themselves from this madness!”