The following is an exclusive excerpt from a new book by Rep. Matt Gaetz (R-FL), Firebrand: Dispatches from the Front Lines of the MAGA Revolution, available Tuesday, September 22.

America is not just a constitution, idea, or set of values. America is our home. And we must do everything to protect our home.

During a trip to the U.S.-Mexico border in Yuma, Arizona, I met patriotic Americans working in the U.S. Border Patrol. If she had her way, my colleague AOC would fire them all and denigrate the role they play in safeguarding our home from uninvited intruders. Almost all were of Hispanic heritage. They spoke with disgust of cartel leaders who would sneak their baby mamas (or is it baby mamacitas?) across the border late in pregnancy so that their children—proven to be the next generation of cartel talent— would have the trappings and legal benefits of American citizenship.

El Chapo’s sons and fellow cartel bosses’ sons are Americans by law. The greatest nation in human history is getting played—and rather easily—by Third World narcos. 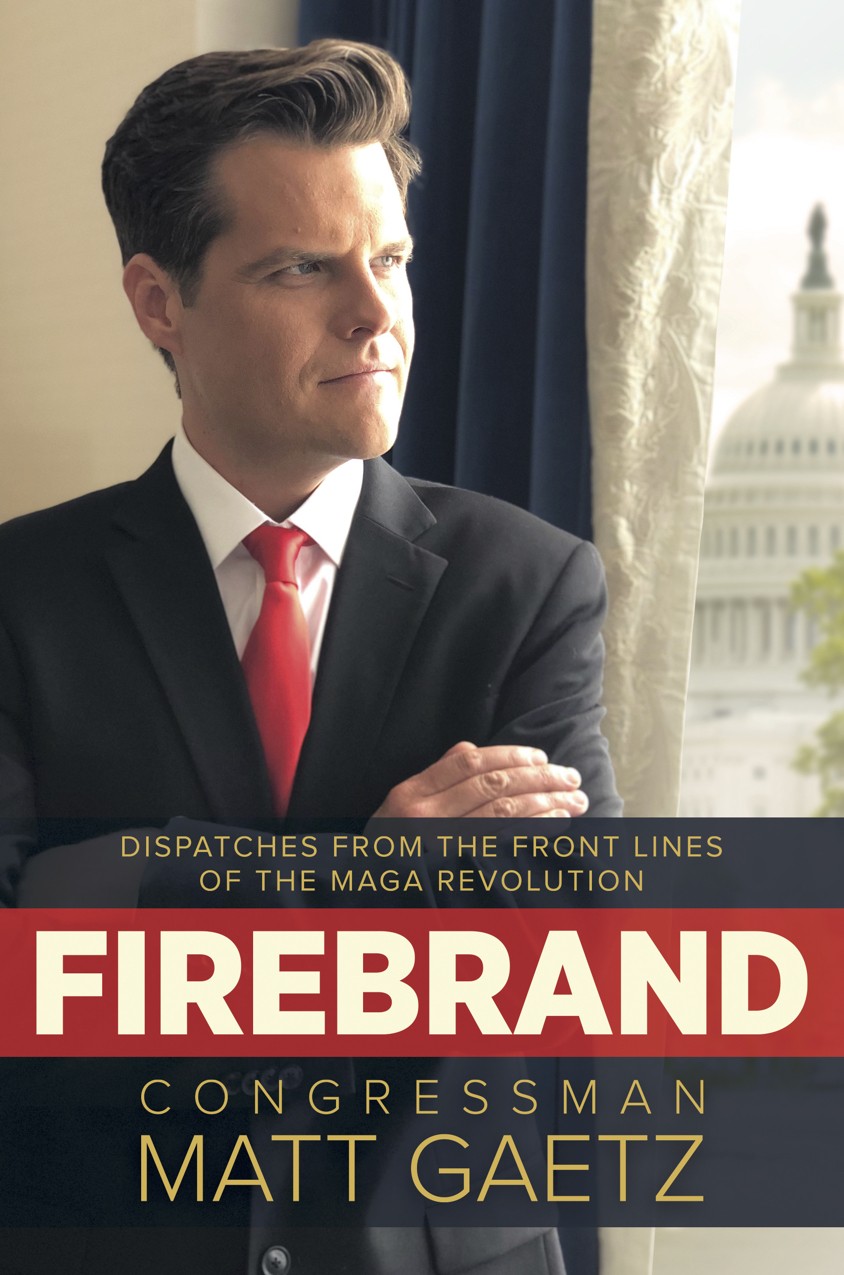 Indeed, every single one of the children born in these criminals’ care is as American as you or me. Or so the defenders of birthright citizenship—really a form of fraud—would have you believe. Nobody knows how many children become citizens in this way, but the State Department estimates that “thousands of children” are born in the U.S. each year to people who are either visiting or conducting business on nonimmigrant visas.

This isn’t “One man, one vote” but Boss Tweed-style politics where criminal organizations take advantage of what our ruling elite’s asinine abstractions permit. Don’t hate the players. Hate the game. Then change it.

But there are few who want to change the game. They play word games instead. The language of immigration itself is designed to obfuscate reality. An “undocumented” immigrant may, the language implies, become documented. They didn’t break in without permission—they’re just missing some paperwork. A “migrant” sounds like someone who can’t be stopped by a border any more than you can stop the migration of birds or the butter-flies.

The Left often talks about the “stakeholders” in a community whenever there’s a project they don’t like, but they seem positively incurious about how unchecked immigration affects the body politic. The research has been extensive.

Professor George Borjas of Harvard—we won’t hold that affiliation against him—who is himself an immigrant, has shown that increased legal and illegal immigration has consequences. “Wage trends over the past half-century suggest that a 10 percent increase in the number of workers with a particular set of skills probably lowers the wage of that group by at least 3 percent,” he wrote for Politico.

Borjas estimates that the wealth transfer from American employees displaced by illegal immigration to their American employers is enormous, roughly half a trillion a year. It’s not a bad deal for illegal immigrants, either, who earn far more than they ever would have back home. A “drywallero” makes a lot more in Houston than in Honduras. So, we have to build the wall.

Walls are going up all over the world, even if Republican majorities in Congress won’t really fight for them. Democrats tell us walls are racist. As President Trump reminds them, “We don’t build walls because we hate the people on the outside. We do it because we love the people on the inside.”

In the Third World nations the Democrats want to send more of your money to, you see how often walls are going up around homes. Some nations—such as Israel and Hungary—put walls around their borders. But to build a wall you need the will. Americans clearly have it more than their bought-off government does.

The success of consumer products like Ring or caller ID prove that Americans want to know who is at their door wanting in, or on their phone seeking access. However high we build the wall, it won’t be high enough to stop someone who overstays a visa, but we can stop new interlopers.

Walls must go up around some of our concepts, too. Citizenship should be one such concept. Birthright citizenship-by-fraud should not be allowed into the legal lexicon in America if we really love and cherish her as much as we should.

Nor is birthright citizenship recognized in many other places. Our left-wing courts often draw inspiration from foreign powers seeking to import foreign concepts into our law. And yet they are quite cautious about drawing lessons from abroad when it comes to birthright citizenship policies. It’s easy to see why. Only thirty countries out of nearly two hundred practice birthright

citizenship, Michael Anton notes. Fully 6.8 billion of the world’s people live in regimes that bar birthright citizenship. Are they all racists and nativists too? Or do they cherish what they have more than we do?

All of our enemies want their money here and that’s because we have integrity. You have to have integrity to have a country. You have to know who is coming and going and how often. Banks implemented Know Your Customer laws to stop money laundering by criminals.

Employers need better technological tools to help make sure they aren’t unwittingly employing illegal aliens. Do we not have a right to know who is in our home? If a man’s home is his castle, does he not deserve to build a moat around it? Do he and his neighbors on Neighborly or the Neighborhood Watch not have a right to defend their homes? We can’t have white picket fences if we can’t trust our neighbors not to invade by climbing over them.

For most Americans, these issues are obvious, but not for our business elite. Let’s explain the issue in terms that they can understand. If you and I started a company together and I suddenly added another class of shareholders, you’d rightly sue me for breaching our agreement. The elite have an obligation to protect the workers who we already have and are patriotically obligated to serve.

To be a public servant, you must actually serve the public. To be a business leader, you have to lead. Maybe Mitt Romney is right, and corporations are in fact people. You should then be

America is a nation of settlers who have restricted and permitted immigration when it suited our interests. Globalization has reduced the size of our world while simultaneously increasing its complexity.

In 2020 and beyond, our immigration policy should not be based on a poem, and nor should it look and feel like a Ponzi scheme. And no, illegal immigration is not an “act of love” as Jeb Bush put it, but of breaking and entering. Unlawful entry is a crime. In the best of scenarios, we hope that the breaking of our laws stops after getting here illegally, but all too often it doesn’t.

I’ve looked into the tear-filled eyes of Angel Mothers who lost children to violent illegals. The mere existence of the category Angel Mothers is living evidence of our failure. President Trump was right when he came down that escalator. They aren’t sending their best—but they are taking ours.

Matt Gaetz is currently serving his second term as the U.S. Representative for Florida’s 1st congressional district. His new book, Firebrand: Dispatches from the Front Lines of the MAGA Revolution, is available September 22.