A rioter broke the glass door of a library in Louisville, Kentucky, during a riot Thursday evening and threw a flare into the stacks, according to a local reporter.

Rae Hodge, a Louisville-based writer for CNET, tweeted photographs of the shattered glass door, and the flare burning inside the library:

Someone broke the library door glass and threw a flare inside. #Louisville pic.twitter.com/jJN1zWqcOW

Another local reporter, Sarah Ladd, also took a photograph of the flare, and appeared to identify the library as the Third Street branch of of the Louisville Free Public Library, the main branch of the library:

Broken glass and flare inside library on third pic.twitter.com/J8EeDvKBLQ

The riot in Louisville marked the second night of violent demonstrations on the day after a grand jury declined to indict police officers directly in the death of Breonna Taylor in March. The grand jury indicted one police officer for wanton endangerment.

Taylor, 26, was killed in the crossfire when her boyfriend fired at police as they tried to execute a warrant, and after they had knocked on the door — and, according to at least one witness, after they had identified themselves. One officer was hit and wounded, and they returned fire.

The attack on the library is only the latest case of “Black Lives Matter” demonstrations targeting public libraries.

The protests — and riots — that broke out in the wake of the death of George Floyd in police custody in Minneapolis, Minnesota, on Memorial Day have repeatedly damaged public libraries.

The East Lake Library in Minneapolis, Minnesota, was damaged in the earliest riots. Some of the damage appeared to be the result of nearby fires, but some of it was the result of direct attacks on the library — although it was reportedly not as badly damaged as nearby buildings.

Went to clean up East Lake Library this morning. Some burned books, but just a lot of mess. pic.twitter.com/2zRAqMi5Xa

Kim Doss-Smith is from the Neighborhood surrounding East Lake Library. When she saw a kid throwing a Molotov cocktail into the window she asked “are you a nazi?” she says he looked horrified. “Cause only nazis burn books.” The kid got in and helped out out the fire. pic.twitter.com/3PRc0QLxG1

For anyone curious about how East Lake Library fared through the night. Well here it is. Reports of it being burned are false. Doesn’t look like anyone entered the library. Not unscathed though. compared to the neighboring buildings where every piece of glass was smashed… pic.twitter.com/dfXPJEO2mA

“We had graffiti and broken windows over the course of the long weekend,” said Erika R. Martinez, director of communications for Denver Public Library. “At this time, we anticipate replacing the windows will cost about $15,000. We don’t have an estimate on the removal of graffiti and we will continue to assess damages over the coming days. As part of the city and county of Denver, Solid Waste has been supporting us with the removal of the graffiti.”

A Denver Art Museum spokeswoman said glass panels on the under-construction welcome center on 13th Avenue were damaged, and graffiti was sprayed throughout the campus, including on the outdoor sculpture “Cow and Calf.” A History Colorado spokesman said the weekend’s damage was limited to exterior parts of the building.

In Sacramento, California, the Stanley Mosk Library and Courts Building was tagged with “BLM” graffiti. 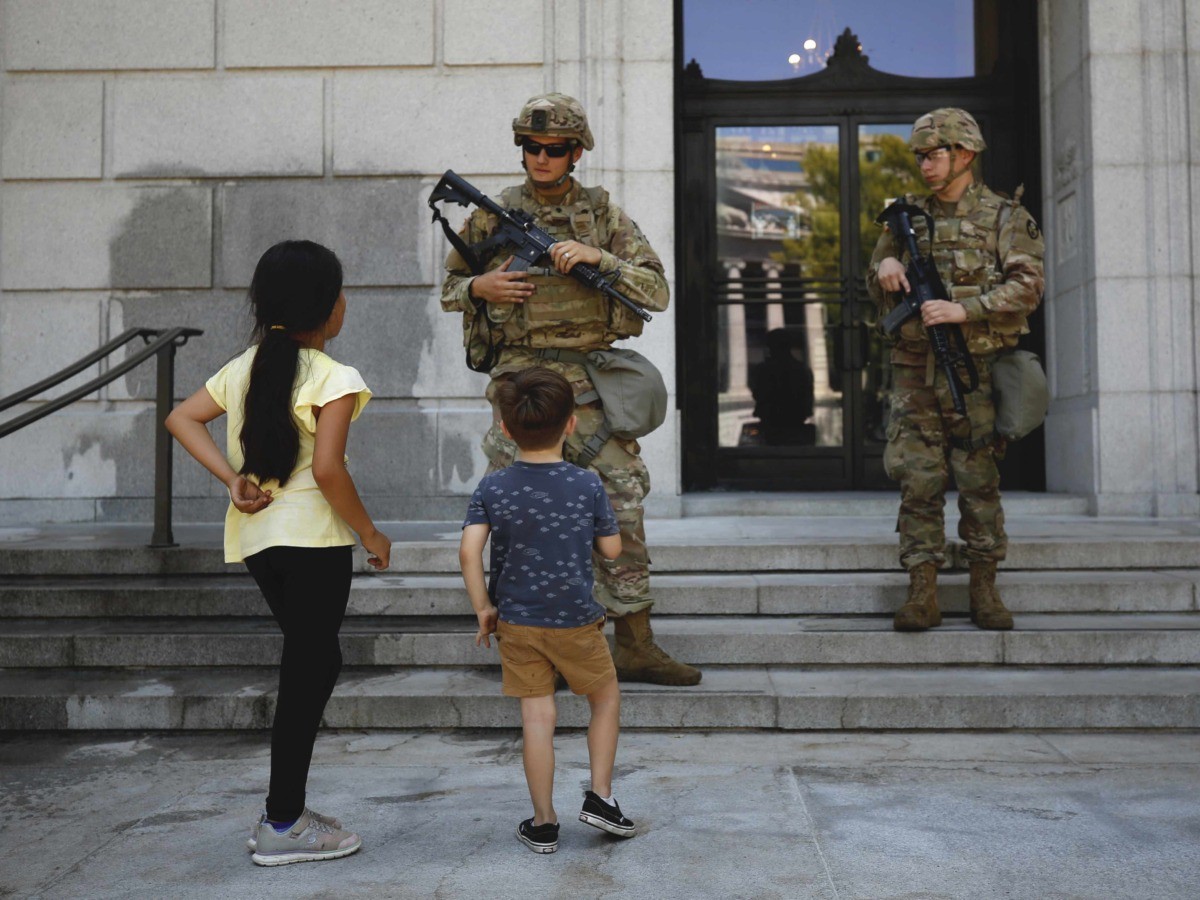 Bianca Luna, 6, left, and Elijah Ducey, 3, ask members of the California National Guard if they would like some water, as they stand guard at the Stanley Mosk Library and Courts Building in Sacramento, Calif., Tuesday, June 2, 2020. More than 2,400 members are deployed in several cities to guard infrastructure, freeing up law enforcement officers to respond to incidents like vandalism and looting that occurred during demonstrations sparked by the death of George Floyd, who died after being restrained by Minneapolis police officers on May 25. (AP Photo/Rich Pedroncelli)

In Santa Monica, California, rioters spray-painted graffiti all over the public library, including “Save a life, kill a cop”: 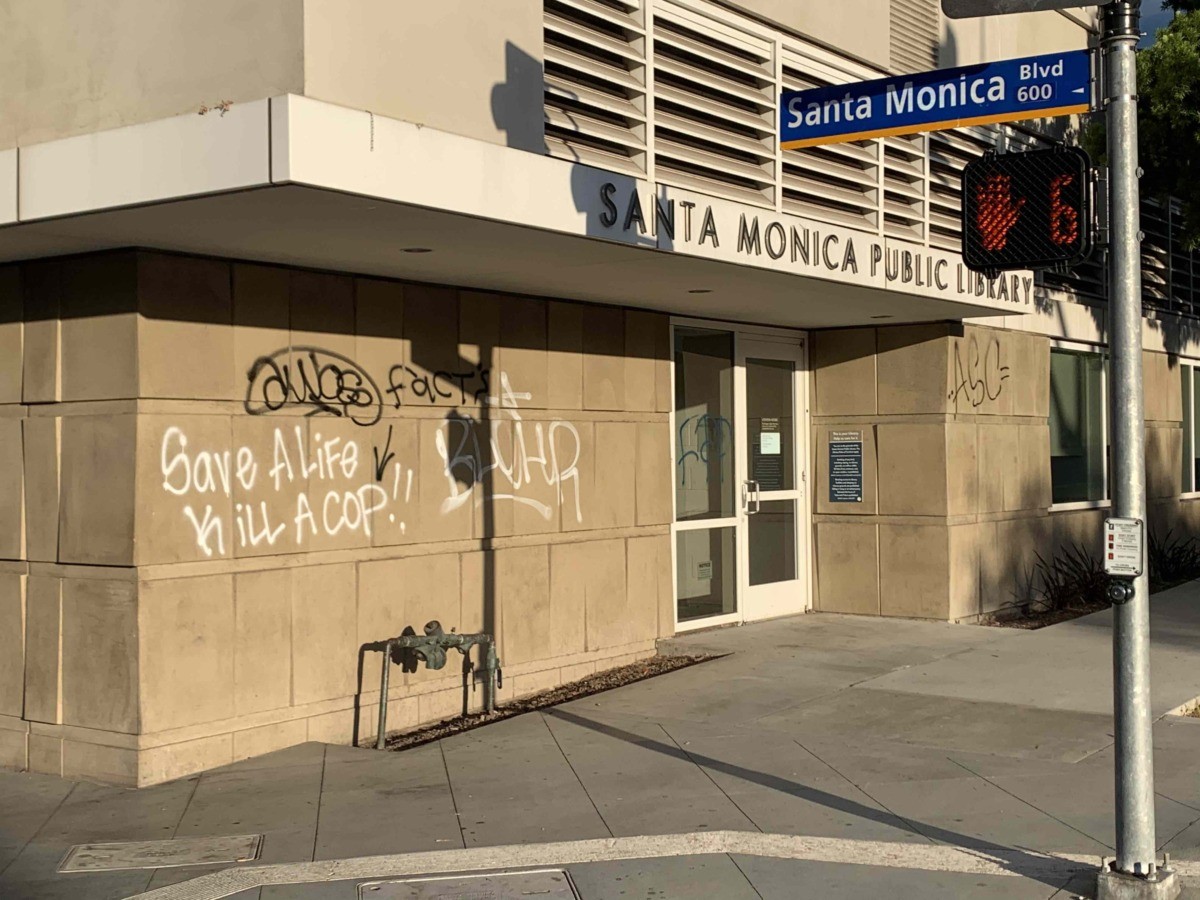 In Beverly Hills, California, the sign outside the public library was reportedly tagged with graffiti as well.