VERDICT: MOSTLY FALSE. While the Obama-Biden administration delivered a more than $80 billion bailout to United States auto corporations, American jobs continued being offshored and tens of thousands of American auto workers had their pensions slashed. Also, Biden had little to do with the auto bailout.

“Joe Biden is responsible for saving America’s auto industry and you voted against it,” Harris told Vice President Mike Pence.

As CNN has fact checked, Biden was hardly involved in devising plans to bail out the auto industry. The original plan came from George W. Bush’s administration:

With just weeks left in his presidency and in the midst of the great recession and an automotive crisis in the US, Bush announced on December 19, 2008 a $17.4 billion auto bailout — $13.4 billion of which would be distributed almost immediately. [Emphasis added]

After an auto bailout bill was rejected by the Senate, Bush took this money from the Troubled Asset Relief Program. Obama continued where Bush left off, and by June of 2009, had given — combined with the amount under Bush — $80 billion in bankruptcy loans from TARP, mostly to Chrysler and General Motors. [Emphasis added]

Between 2009 and 2013, the Obama-Biden administration delivered a more than $80 billion bailout for General Motors (GM) and Chrysler. The bailout, though, did not stop GM or Chrysler from continuing to offshore American jobs overseas and to Mexico.

Analysis from 2012 by the Hoover Institute’s Paul Gregory detailed how GM’s outsourcing did not end despite the bailout:

We need to look no further than General Motors’ own figures to learn that GM outsources almost two thirds of its jobs overseas. Less than one in five GM vehicles are manufactured in the United States. [Emphasis added]

Since the bailout, GM alone has invested $450 million in a new plant in Argentina, over $1 billion in a new plant in Wuhan, China, $500 million for two new plants in Brazil, $200 million for an engine plant in Thailand, $540 million for an engine plant in Mexico, another $420 million for new vehicle production in Mexico, and $150 million for a new plant in Indonesia. Additionally, GM has promised another $1 billion for new production in Russia, it has signed over millions in battery and other electric car technology to Chinese partners in exchange for a joint development center in China (PATAC), and has increased annual global sourcing of India-made parts from $500 million to $1 billion. In Europe, where GM has lost $16.4 billion since 1999, and now faces the same overcapacity issues that contributed to bankruptcy, it has closed only one plant ( where it paid workers around $200,000 each in severance) and is now giving raises to German workers. This list is by no means comprehensive, but the message is clear: Having cut American jobs to the bone before and during the bailout, GM is now lavishing investment on everyone else, undercutting any expectation of increased American auto exports. [Emphasis added]

In addition to continued offshoring, about 20,000 non-unionized workers at the auto parts supplier Delphi had their pensions slashed by as much as 75 percent thanks to a scheme between the Obama-Biden administration and the Pension Benefit Guaranty Corporation (PBGC).

A federal report in 2013 detailed that the Delphi workers would likely have their pensions cut by an estimated $440 million. Meanwhile, GM topped off unionized Delphi workers’ pensions at a cost of about $1 billion.

Delphi, which has since split into Aptiv and Delphi Technologies, announced in 2006 that it would shutter 21 of its 29 plants in the United States — offshoring some 20,000 U.S. jobs to Mexico, China, and other foreign countries.

At the time, Delphi employed nearly 50,000 Americans who earned about $30 an hour on the assembly line. Now, workers in Mexico for the company earn about $1 an hour.

Analysis by the St. Louis Federal Reserve Bank notes that since the North American Free Trade Agreement (NAFTA) in 1994 and China’s entering the World Trade Organization (WTO) in 2001 — both of which Biden supported while in the Senate — U.S. auto manufacturing has declined.

U.S. motor vehicle manufacturing employment in the U.S. totaled 281,600 workers in 1994 when NAFTA was implemented. This amount remained steady the rest of the decade but began to decline in the early 2000s. Employment contracted sharply during the Great Recession, and it reached a low in 2009, with employment at 50 percent of its 1994 level. [Emphasis added]

As of 2018, employment in this industry stood at 233,700 workers (similar to its 2006 level), a 17 percent decline since 1994. However, this decline is very much in line with what we see in overall manufacturing employment… [Emphasis added] 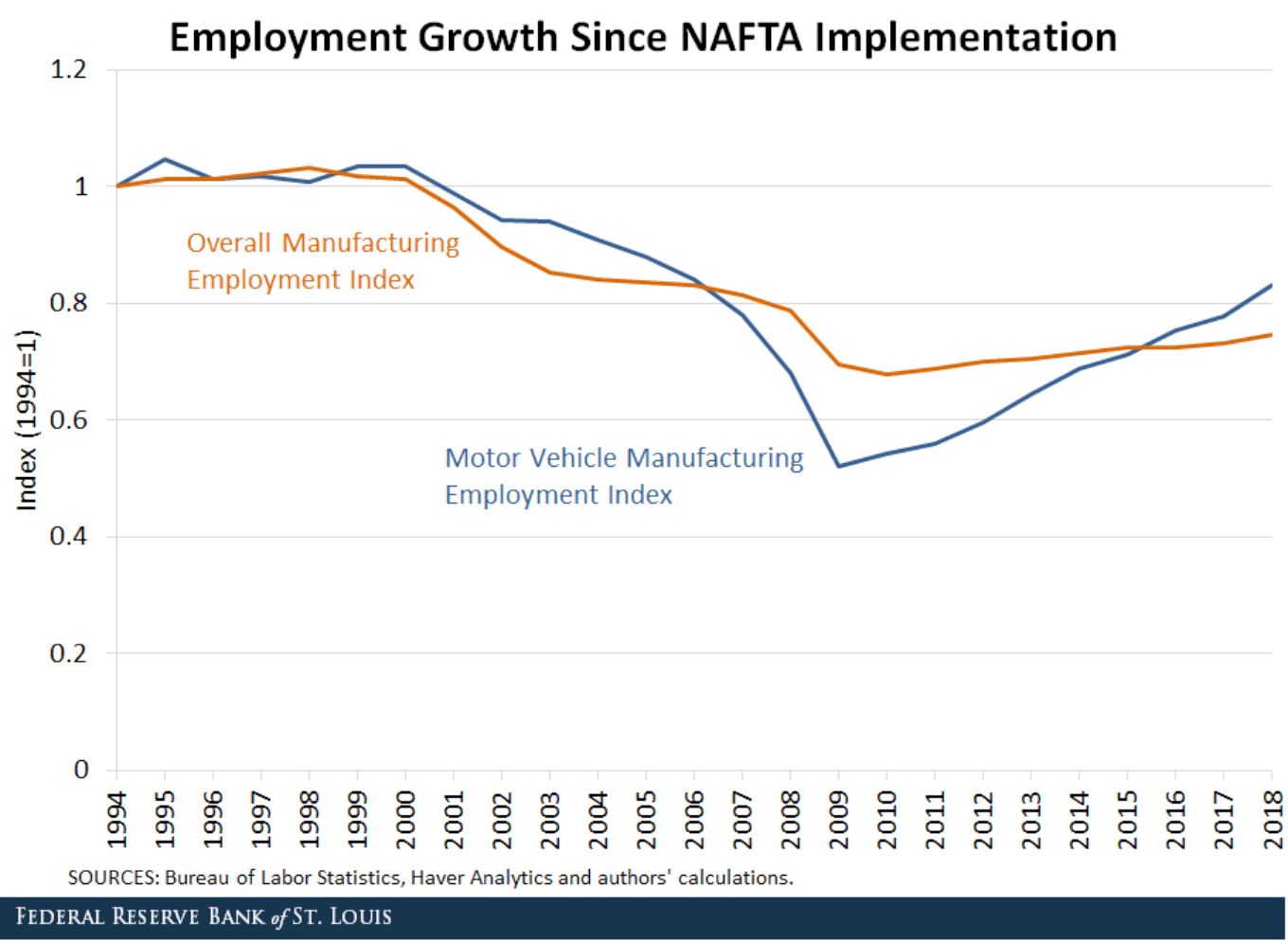