Abortion rights activists known as The Satanic Temple (TST) announced Wednesday they have posted billboards in Texas and Florida to promote what they call their “religious abortion ritual.”

The Satanic Temple claims its members may undergo “first-trimester abortions upon demand in states that have enacted the Religious Freedom Restoration Act (RFRA).”

In April 2019, the Satanic Temple also announced the IRS had recognized it as a “church” with tax-exempt status.

“As a federally-recognized religion, The Satanic Temple utilizes RFRA and the Hobby Lobby precedent to protect its members from unnecessary abortion regulations that inhibit their religious practices and force them to violate their deeply-held beliefs,” TST states on its website.

Despite its claim to be a “federally-recognized religion,” however, TST also states on its FAQ page the group does not worship Satan.

“[N]or do we believe in the existence of Satan or the supernatural,” TST says. “The Satanic Temple believes that religion can, and should, be divorced from superstition. As such, we do not promote a belief in a personal Satan.”

Nevertheless, in its campaign to undermine pro-life legislation, TST is now couching abortion in “religious” terms, much the same as Planned Parenthood and the abortion industry refer to terminating unborn lives as “health care”:

The Satanic abortion ritual provides spiritual comfort and affirms bodily autonomy, self-worth, and freedom from coercive forces with the affirmation of TST’s Seven Tenets. The ritual is not intended to convince a person to have an abortion. Instead, it sanctifies the abortion process by instilling confidence and protecting bodily rights when undergoing the safe and scientific procedure.

“Religious freedom ensures Satanists have access to safe abortions that are free from unwarranted state interference,” TST claims on its website, arguing that Satanists, based on their “religion,” are exempt from required waiting periods, counseling, and offering of ultrasounds prior to an abortion, as well as mandatory burial of fetal remains after an abortion, in states that have enacted these laws.

TST describes how a woman “performs” the abortion ritual as she undergoes an abortion:

Prior to receiving any anesthetic or sedation, look at your reflection to be reminded of your personhood and your responsibility to yourself. Focus on your intent. Take deep breaths, and make yourself comfortable. When you are ready, say the Third Tenet and Fifth Tenet aloud. You may now undergo the surgery. After the surgery is completed and any anesthetic has worn off, return to your reflection and recite your personal affirmation. Feel doubts dissipating and your confidence growing as you have just undertaken a decision that affirms your autonomy and free will. The religious abortion ritual is now complete.

According to a press release, one of the TST billboards says, “Pregnancy complications are the sixth most common cause of death among women ages 20 to 34. Abortions save lives!”

In the second billboard, a woman tells her friend she does not have to undergo the waiting period for her abortion because she is a satanist. 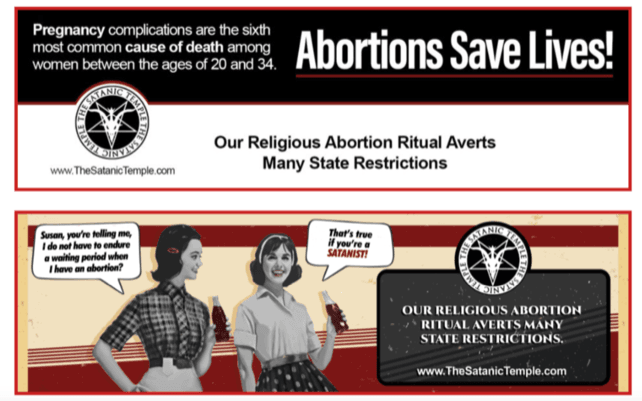 Both billboards state, “Our abortion ritual averts many state restrictions.”

“We want our members to know that performing our religious abortion ritual means they do not have to fulfill regulations that require them to violate their religious beliefs when they have decided to terminate their pregnancy,” said Sydney Goodwin, TST’s religious reproductive rights spokesperson.

In a 3-0 decision in June, the U.S. Court of Appeals for the Eighth Circuit dismissed a lawsuit against a Missouri abortion law filed by a member of The Satanic Temple.

As part of Missouri’s informed consent practices, the law requires that women planning to have an abortion be presented with a booklet that states, “The life of each human being begins at conception. Abortion will terminate the life of a separate, unique, living human being.”

The booklet also contains images of babies in the uterus and how they develop throughout pregnancy. While women must receive the booklet, they are not required to read it.

Nevertheless, Doe claimed that, as a satanist, the law requiring that booklet be presented to her violated both her religious beliefs and the Establishment clause of the First Amendment.

The court ruled, however, the Missouri law is constitutional.

In his opinion, Judge David Stras, a Trump appointee, observed, “As a member of ‘The Satanic Temple,’ she believes that the ‘Human Tissue’ that she was carrying was ‘part of her body.’”

“As she stated in her complaint, her ‘body is inviolable’ and ‘[s]he alone’ gets to decide what to do with it, regardless of ‘the current or future condition of the Human Tissue’ within,” Stras continued.

The judge wrote that Doe’s claim is problematic because “a state does not establish religion by passing a law that just happens to coincide or harmonize with the tenets of some or all religions.”

In the case summary, Stras also noted Doe argued that a Missouri law requiring that she has had an opportunity to view an ultrasound violates her “Satanist beliefs,” which include “without limitation any law that serves no medical purpose or purports to protect the interests of her Human Tissue.”

However, the court disagreed, pointing out that states do have a role in determining when life begins.

The judge wrote that, in 1992, the U.S. Supreme Court’s Planned Parenthood v. Casey plurality opinion “recognized that informed-consent laws like this one serve ‘the legitimate purpose of reducing the risk that a woman may elect an abortion, only to discover later, with devastating psychological consequences, that her decision was not fully informed.’”

TST states the group has appealed the case to the U.S. Supreme Court.