WEST PALM BEACH, FLORIDA — Conservative stars addressed students with megaphones after authorities locked hundreds of attendees out of Turning Point USA’s Student Action Summit on Saturday night due to the event allegedly surpassing venue capacity restrictions implemented in response to the coronavirus. The organization, however, says it had separate overflow rooms available, to which County officials denied students access.

Hundreds of Turning Point USA (TPUSA) attendees chanted “let us in” after being locked out of the event once it allegedly reached maximum capacity.

Upon learning attendees were locked out of the building, event speakers — including Donald Trump Jr., Tucker Carlson, and Charlie Kirk, among many others — brought the event outside, where they delivered their remarks to students through a megaphone so attendees could still hear from Saturday night’s featured guests. 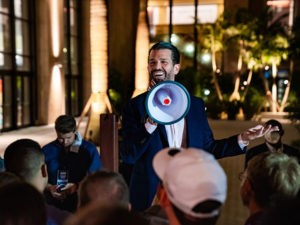 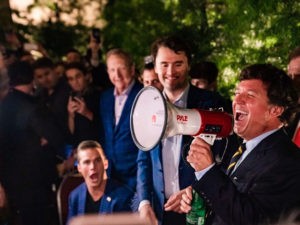 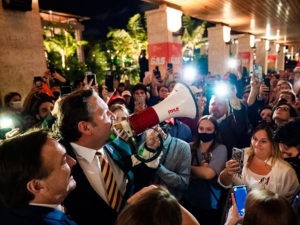 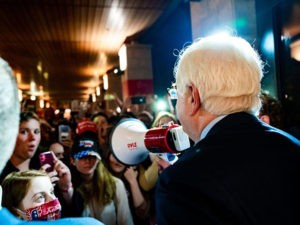 Dennis Prager speaks to attendees locked outside of convention center.

Officials of Palm Beach County — which owns the convention center hosting the event — claim the conservative youth organization oversold tickets, which left hundreds of students stuck outside of the Palm Beach County Convention Center on Saturday night, according to a report by CBS 12 News.

A Turning Point USA spokesperson told Breitbart News that this is not true, as the organization had overflow rooms planned for students once the main venue reached 50 percent capacity, per reopening rules set by the county.

“We didn’t oversell. We had an overflow contingency plan,” said the TPUSA spokesperson. “But once they said that the main venue was at capacity, they stopped allowing students that hadn’t yet registered to register.”

The TPUSA spokesperson added that the organization had arranged the foyer so that it was socially distanced and met all of the coronavirus-related guidelines set by health officials.

“When they blocked the attendees from picking up their badges in the foyer it caused chaos with hundreds of kids stuck outside,” the spokesperson added. “They wouldn’t even allow them in to get their badges so that they could access any of the overflow spaces in different parts of the convention center.”

“The county is trying to SHUT #SAS2020 DOWN, so [Donald Trump Jr.] came to see the students!” tweeted Students for Trump, including a video capturing the moment.

The county is trying to SHUT #SAS2020 DOWN, so @DonaldJTrumpJr came to see the students! pic.twitter.com/lcjhoII7oV

“We are out here with [Donald Trump Jr.] bringing SAS outside to the crowd that the county leftists are trying to keep out of #SAS2020,” added TPUSA COO Tyler Bowyer. “We are doing everything we humanly can to make it available to everyone.”

We are out here with @DonaldJTrumpJr bringing SAS outside to the crowd that the county leftists are trying to keep out of #SAS2020– we are doing everything we humanly can to make it available to everyone.

Please be kind to our @TPUSA staff, we are working on it all pic.twitter.com/AYEsjWBdIR

“We’re working diligently right now to accommodate all students with more overflow space in an outside parking lot adjacent to the venue,” said the TPUSA spokesperson to Breitbart News.

“This is a prime example of how these arbitrary, draconian lockdown measures cause chaos, just like they have throughout the rest of the country,” the spokesperson added.