A U.S. Capitol Police officer died Thursday night after allegedly being struck in the head by a fire extinguisher during Wednesday’s riots at the Capitol.

A police statement confirmed the death of Officer Brian D. Sicknick late on Thursday evening after a day of confusion surrounding his wellbeing: 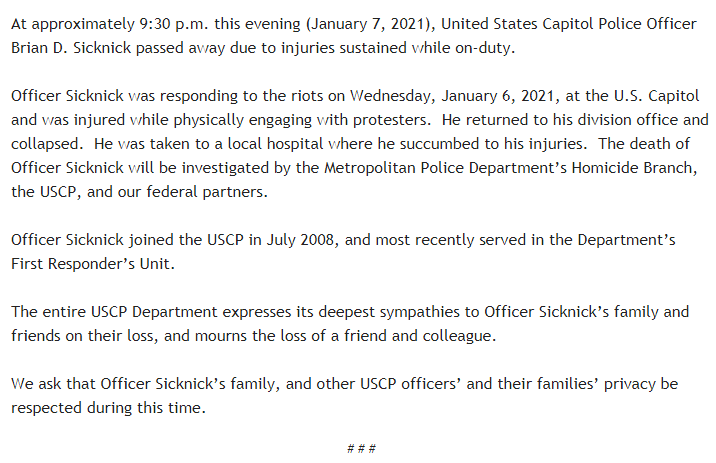 CNN noted the officer “is now the fifth person to die as a result of the day’s violence.”

A US Capitol Police officer involved in the riots at the Capitol yesterday has died, according to two USCP sources

However, a U.S. Capitol Police spokesperson said that those reports were inaccurate and that while the officer is in critical condition, the officer has not died.

>> A House member has confirmed w/ the chief of police & head of the FOP that the very critically injured officer has NOT perished at this time.

They emphasized the privacy of the officer's family should be respected and to pls pray for him & his family at this difficult time.

The United States Capitol Police Chief Steven Sund, released a statement Thursday indicating that over 50 officers from the Capitol police and Metropolitan police forces were injured during the riots.

Sund announced that he will resign next week amid an avalanche of complaints about the way Capitol security was handled during the riots.