House Speaker Nancy Pelosi announced Sunday that the House of Representatives would move to impeach President Donald Trump again after some of his supporters stormed Capitol Hill last week.

“In protecting our Constitution and our Democracy, we will act with urgency, because this President represents an imminent threat to both,” she wrote in a letter to Democrat colleagues in the House.

Pelosi said that the president represents an “ongoing assault on our democracy” that requires immediate action.

She said that House Majority Leader Steny Hoyer would request unanimous consent to bring up a resolution by Rep. Jamie Raskin calling for Vice President Mike Pence to activate the 25th Amendment to remove Trump from office.

“We are calling on the Vice President to respond within 24 hours,” she said.

If the vice president fails, Pelosi said, she will bring up an impeachment resolution on the following day.

She said that the act to impeach the president again would require “great solemnity” going forward.

“Thank you for your patriotism,” she wrote, concluding the letter, “Prayerfully, Nancy Pelosi.”

Pelosi’s ongoing delay would make it significantly more difficult for Democrats to impeach the president before he leaves office, demonstrating that the process will again be more of a political exercise.

On Friday, President-elect Joe Biden avoided taking a position on impeaching the president again with only a few more days left in office, saying he would leave it up to Congressional Democrat leaders.

“It is time for him to go,” Biden said, adding, “The quickest way that that will happen is us getting sworn in.”

Senate Majority Leader Mitch McConnell released a memo last week on what the Senate will do if the House of Representatives votes again to impeach Trump. He noted the earliest possible date that the Senate could begin the process would be January 19, one day before President-elect Joe Biden takes office.

The actual impeachment trial, McConnell explained, would theoretically begin after Trump’s term is over. 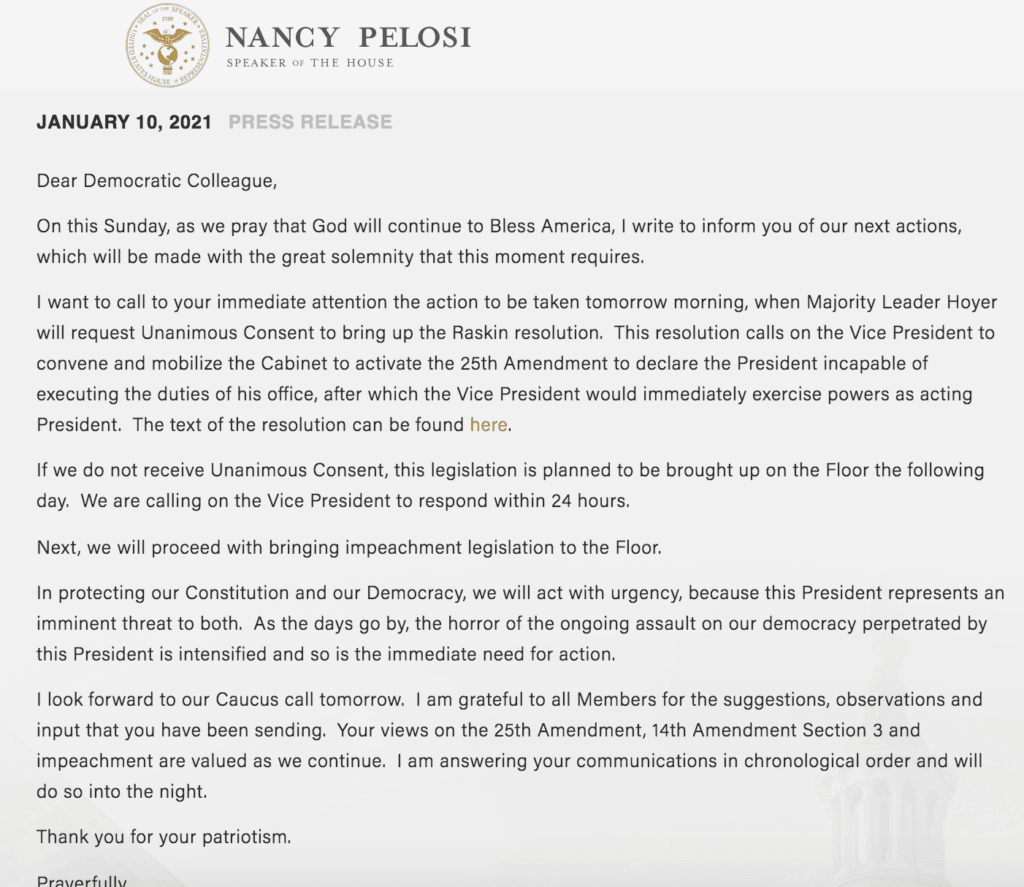