President Joe Biden put forward executive gun controls Thursday to fight what he called “an epidemic” of gun crime across the country.

CNN quoted Biden saying, “Gun violence in this country is an epidemic.”  He went so far as to describe it as “an international embarrassment.”

The president then put forward executive actions which included initiatives in four areas Breitbart News highlighted on Wednesday. Those were new restrictions on “ghost guns,” a push for red flag laws, recategorization of AR-15 pistols, and DOJ-led research into gun trafficking.

As for red flag laws, Biden said, “We know red flag laws can stop mass shooters before they can act out their violent plans.” He then directed the Justice Department to publish model red flag legislation that states can adopt.

He did not mention Colorado has had a red flag law since January 1, 2020, but it did nothing to hinder, much less prevent, the March 22, 2021, Boulder attack.

He added, “Modifications to firearms that make them more lethal should be subject to the National Firearms Act.” 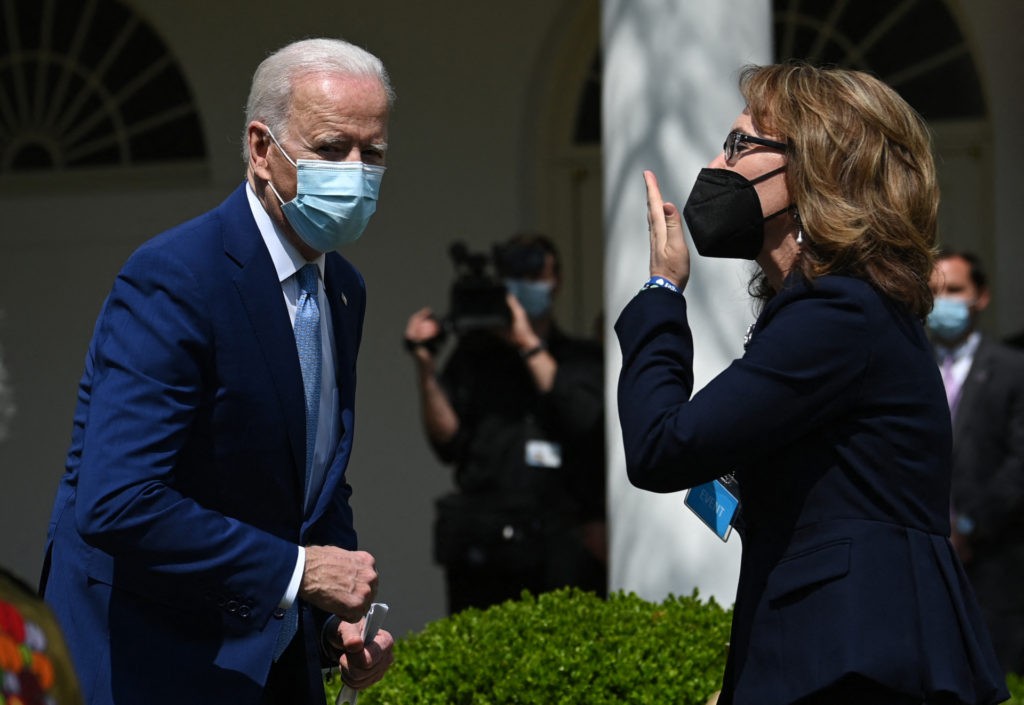 U.S. President Joe Biden walks towards former U.S. Representative Gabby Giffords after he spoke about gun violence prevention in the Rose Garden of the White House in Washington, DC, on April 8, 2021. (BRENDAN SMIALOWSKI/AFP via Getty Images)

As Breitbart News noted, if the purchase of AR-pistols is categorized as the purchase of a “short-barreled rifle” the process of buying the firearm could require being fingerprinted and photographed, as well as undergoing a background check, registering the firearm with the ATF, paying the federal government a $200 tax (on top of the price of the firearm), and waiting nine to ten months for the whole purchasing process to be completed.

That is the standard process for other short barrel rifles and firearms along with accessories under the purview of the National Firearms Act.

The president pushed for an annual report on gun trafficking too, saying: “Today with online sales, and ‘ghost guns,’ times and trafficking methods have changed. We have to adjust. We also have to ask the Justice Department to release a new annual report, this report will better help policy makers address firearm trafficking as it is today, now what it was yesterday.”

Biden then pointed to the cost tied to gun crime seen in large cities across America, particularly in minority communities. He said, “Gun violence is estimated to cost the nation $280 billion a year.”

He suggested Americans could have gun control instead, and claimed such control comes “at a fraction of the cost.”