The revelations are significant for a number of reasons. First and foremost, Cheney was spreading material lifted directly from the Biden White House to the whole House GOP conference. Secondly, and perhaps even more importantly, Cheney was sending House Republicans what was supposed to be information to arm them to fight against Democrats’ and Biden’s amnesty plan that were in fact actually talking points first publicly published on the Biden White House website to promote the exact same plan.

When reached for comment on the matter Tuesday, Cheney’s office said to Breitbart News that the document was not plagiarized. “I would push back on idea that it was ‘plagiarism,’ for starters,” Jeremy Adler, a Cheney spokesperson, told Breitbart News. “If you’ve seen the email, it specifically says the points about the proposal came from the White House. We were not taking the information and passing it off as our own or anything like that.”

In a follow-up email, Adler added: “It says in the document those points came from reports out of the White House.”

But nowhere in the three-page document does it say this information came from the Biden White House. And Cheney’s email to the House Republican conference did in fact attempt to pass off the document as a House GOP conference product — and makes no reference to the White House fact sheet in question.

The email, from Cheney’s official House email address sent to House GOP members and staff on Feb. 19, 2021, at 7:57 a.m., was her “Trailblazer” email she regularly blasts out to the conference. In it, the top of the “Top Takeaways” section is a criticism of Biden’s amnesty agenda and legislation. “President Biden’s Immigration Plan Unveiled Yesterday Would Leave Our Border Less Secure And Hurt Law-Abiding Americans,” Cheney’s email says.

The email includes several other details on immigration, and then it states that a linked and embedded document which Cheney says was “put together by the House Republican Conference” exposes the Biden amnesty plan.

Cheney wrote to members and staff in the House GOP conference to “please see the below background document put together by the House Republican Conference that summarizes what’s included in Democrats’ legislation.”

The document, images of which are embedded here, is also branded with the House GOP conference logo and does not state anywhere that these passages came from the Biden White House fact sheet. 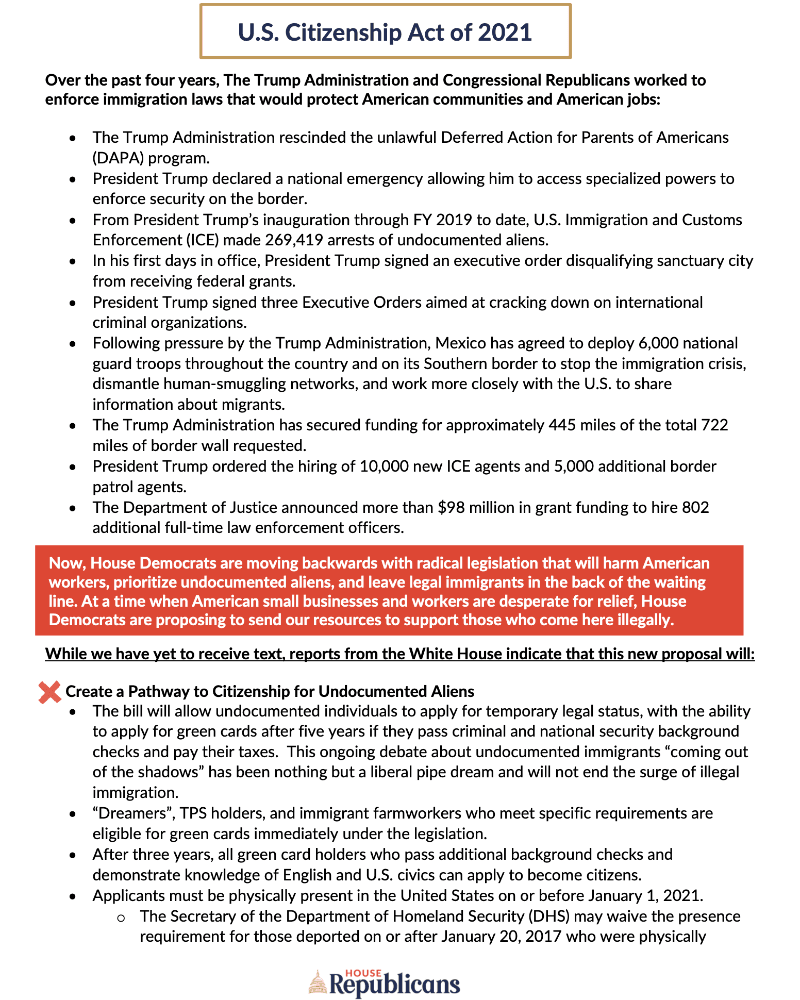 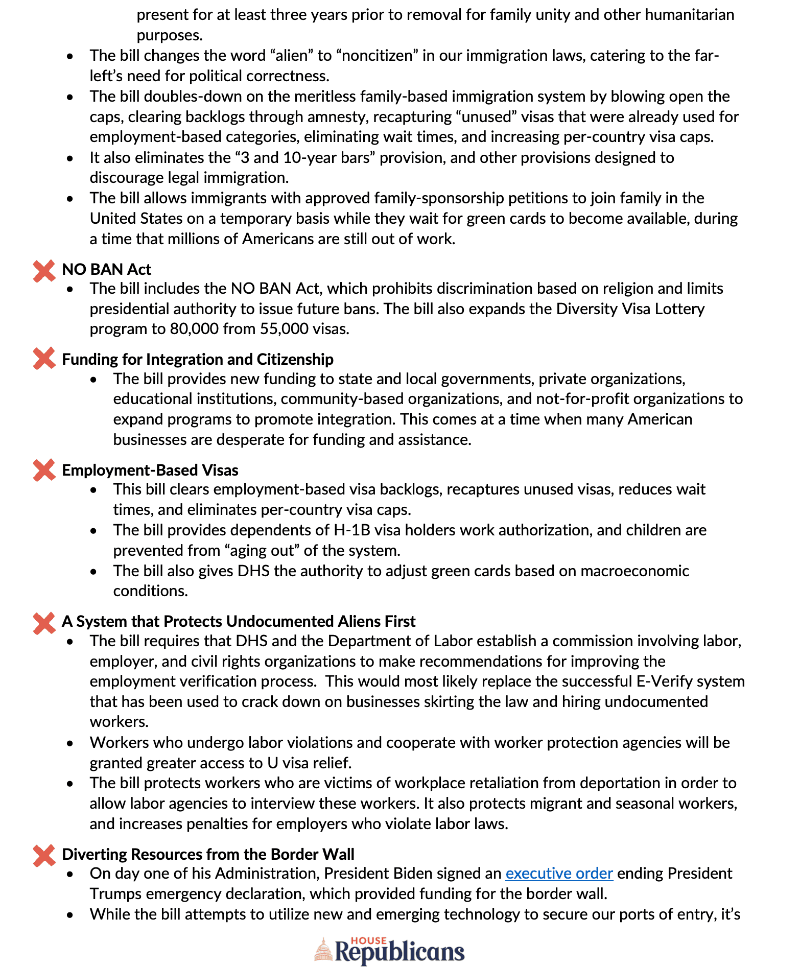 When presented with this extra information about Cheney passing the document off as a conference product in the email, and about the GOP conference branding and lack of reference in the email or document to the Biden White House fact sheet, Adler issued a follow-up statement attacking this story. The statement included a link to the actual Cheney email from Feb. 19 published online, which again demonstrates that there is no reference to the Biden White House document from which the House GOP conference document lifts several passages.

“This is an absurd story,” Adler said. “Here’s the entire memo and please publish it. Conference staff outlined the accomplishments of the Trump Administration, detailed the dangerous policies the Biden Administration was pushing, and noted that the summary of the Biden proposal was based on reports from the White House.”

“The bill will allow undocumented individuals to apply for temporary legal status, with the ability to apply for green cards after five years if they pass criminal and national security background checks and pay their taxes,” Cheney’s document says halfway down the first of its three pages, for instance.

But nearly that exact language describes the Biden amnesty plan in a fact sheet released by the Biden White House a month earlier on January 20, 2021, the day Biden was inaugurated. “The bill allows undocumented individuals to apply for temporary legal status, with the ability to apply for green cards after five years if they pass criminal and national security background checks and pay their taxes,” the Biden White House fact sheet says.

The only change between the two is the Cheney document changed the term “allows” from the Biden White House fact sheet to “will allow.”

This is hardly the only passage lifted from the Biden White House talking points by Cheney, and then sent to the House GOP conference and passed off as a Republican document in response to the bill.

Another section of Cheney’s document about the part of Biden’s bill that deals with so-called “Dreamers” is lifted word-for-word from the Biden White House document.

There are other examples, too, like one where Cheney’s document changes one word from the Biden White House document. “Workers who undergo labor violations and cooperate with worker protection agencies will be granted greater access to U visa relief,” Cheney’s document says about the Biden bill.

“Workers who suffer serious labor violations and cooperate with worker protection agencies will be granted greater access to U visa relief,” Biden’s White House document says about the bill.

The only difference is Cheney’s document changed the word “suffer” from Biden’s document to “undergo.”

Several more passages appear in the Cheney document after they had already appeared in the Biden White House document, including:

This story comes as Cheney faces serious blowback from her House GOP colleagues and across the conference as members have grown frustrated with her to the point that there is serious consideration she may be removed as conference chairwoman in the next few weeks.