ROME — Jesuit Father Thomas Reese wrote Tuesday “the hospitalization of Pope Francis marks the beginning of the end of his papacy,” adding time “is running out” for the 84-year-old pope.

The progressive Father Reese, who stumped for “Catholics for Biden” and has urged his fellow Catholics to support “pro-choice Democrats,” states that the Francis pontificate will only be a success “if he is followed by popes who are in sync with his approach to Catholicism, and this is not guaranteed.”

“He has appointed sympathetic men to the College of Cardinals, but conclaves are unpredictable as his own election showed,” Reese warns.

Since his election in 2013, Francis has produced “incredible achievements,” Reese gushes, putting his papacy “squarely on the side of migrants and refugees” while offering “a prophetic voice against global warming and the excesses of capitalism.”

The priest makes the curious claim that Francis has treated his opponents “with the gentleness of a pastor who hopes for their conversion,” insisting that “Francis refuses to fire people,” which will come as news to the many conservatives like Cardinal Raymond Burke or Cardinal Gerhard Müller whom Francis unceremoniously dumped.

Reese also declares that Francis has “encouraged dialogue and a more consultative style of governance,” a claim Vatican watchers will find astonishing, since he is known to many in Rome as the most autocratic pontiff since Julius II (1503-1513).

Unlike his predecessors John Paul II and Benedict, who seemed to relish and actively seek out dialogue with those who disagreed with them, Francis surrounds himself with like-minded prelates, and would not even deign to answer four cardinals who put forth doubts (dubia) regarding possibly ambiguous teaching, asking for a clarification.

“In short, Francis has rebranded the papacy for the 21st century with a pastoral, prophetic and inclusive voice,” Reese asserts, highlighting Francis’s well-known downplaying of Catholic doctrine. 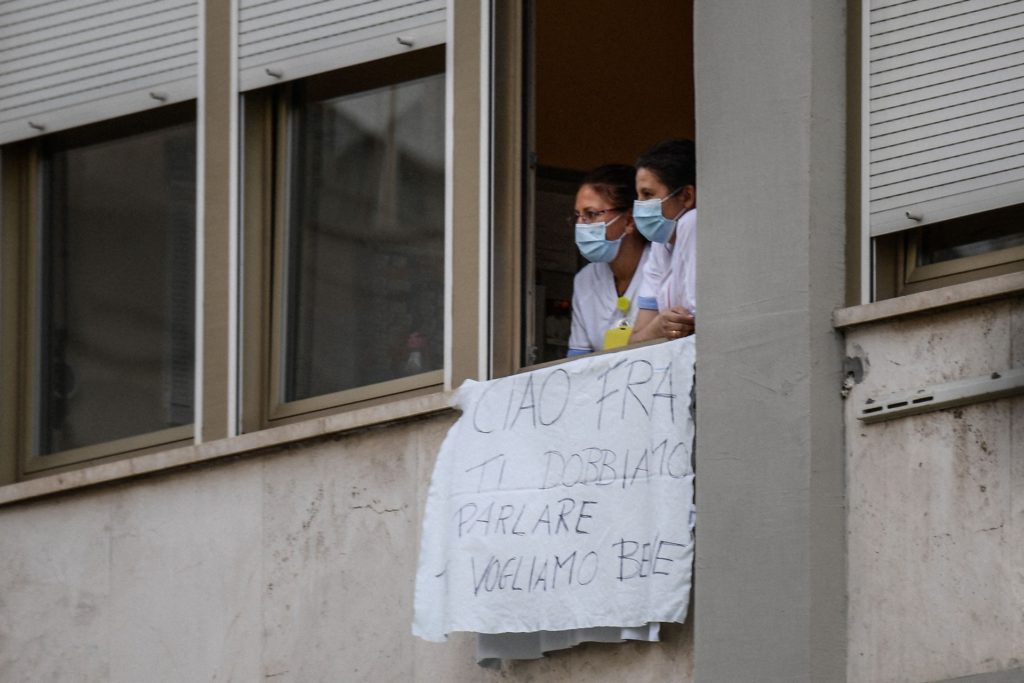 Nurses of the Agostino Gemelli Polyclinic hold a banner reading “Bye Francis, we need to talk to tou, we love you” on July 14, 2021 in Rome, as the Pope is set to leave the hospital after being hospitalized following a colon surgery. (FILIPPO MONTEFORTE/AFP via Getty Images)

Father Reese has no words of praise for Francis’ recurring condemnation of abortion as mafia-style murder or of his declaration that homosexual unions can in no way be compared to marriage between a man and a woman.

The Jesuit priest notes that the pope’s recent surgery for diverticular stenosis seems to have been successful, yet even so “it will be miraculous if he is able to continue as pope for another five years.”

“We may look back at his hospitalization as the moment that marked the beginning of the end of his papacy,” he proposes.

Reese suggests that the one area where Francis has not been successful during his 8-year pontificate is in convincing all the bishops and priests in the world to shift to his vision and priorities.

“Many bishops and priests in the Roman Curia and around the world think his election was a mistake and they are hoping for a return to what they regard as normalcy in the next papacy,” the priest declares.

Reese cites the example of the United States, where bishops “who embody Francis’ values make up only 20 to 40 of the 223 active U.S. bishops.”

On the other hand, young candidates for the priesthood who find inspiration in Francis are as rare as “Catholic unicorns,” Reese contends.

If the Francis pontificate is “reckoned a failure,” Reese concludes, “it will be because Francis failed to replace or outlast the clerical establishment put in place by John Paul and Benedict.”