Former Illinois Democrat Governor and convicted felon Rod Blagojevich claimed that a lawsuit he filed Monday would vacate his corruption conviction and open the door to run for office again.

Blagojevich was removed from office in 2009 after being prosecuted on corruption charges for attempting to sell the U.S. Senate seat that was then being vacated by Barack Obama who resigned after winning the presidency.

The ex-governor was convicted of corruption and served eight years of a 14-year sentence. He was released nearly 18 months ago when President Donald Trump commuted his sentence. But his conviction has barred him from running for office ever since. Now, the former governor, known as “Blago,” says a new lawsuit will prove his conviction was unconstitutional, which could open the door for him to launch a new political career. 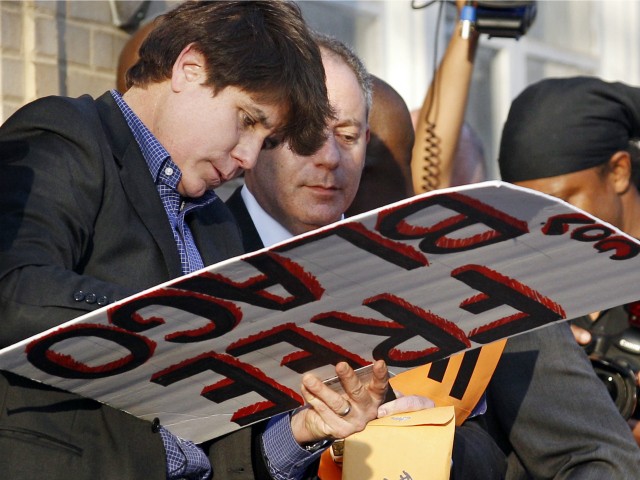 This March 14, 2012 file photo shows former Illinois Gov. Rod Blagojevich autographing a ‘Free Gov. Blago’ sign for one of his supporters at his home in Chicago the day before Blagojevich was due to report to prison to begin serving a 14-year sentence on corruption charges. (AP Photo/M. Spencer Green, File)

According to Chicago’s ABC affiliate, Blago drafted a ten-page federal lawsuit that was filed Monday at Chicago’s Dirksen federal building.

ABC 7 added that the lawsuit was filed “pro se” by Blago as a citizen and without an attorney since he was disbarred last year.

In the lawsuit, Blago reportedly claims the methods used by the General Assembly to topple him violated his constitutional rights.

Blagojevich explained he is not targeting any particular office but is focused solely on the constitutionality of the methods used to impeach him and shut him out of statewide politics. He charges that the General Assembly violated his rights by barring him from calling witnesses during his impeachment trial and preventing him from playing any of the many hours of FBI wiretap tapes of his conversations about the Senate seat. He also says prohibition against running for office is illegal.

“I could legally run for President of the United States, but I can’t run for alderman of the 33rd Ward,” the former governor pointed out.

“That’s unconstitutional to pass a law against one person that he or she can’t run for anything,” Blagojevich said of the provision that bars him from running for office in the Land of Lincoln.

“Now, I’m not saying that I want to run for anything. And there’s a good chance my wife Patty is going to watch this, and I want to be clear, sweetheart, I’m not thinking about running for anything in particular,” Blagojevich added. “But I do feel like it’s a violation of not only my right but the right of the people to elect who they want, to elect, to choose whoever they want to choose. Vote for, vote against whoever they want to vote for or against. It’s a voting rights issue.”

“I’m determined to pursue this in court,” Blago exclaimed. “It’s the sort of thing that I believe has the potential to reach the United States Supreme Court. I’m determined to see it through, and I know I’m on the side of the angels.”