We are entering day five of a crisis where thousands of American civilians are trapped in Afghanistan, and the president of the United States was … on vacation, is still nowhere to be found, is not talking to the American public, is totally incommunicado, is not even releasing statements or speaking to other world leaders.

At first, over the weekend, as this crisis unfolded, I thought His Fraudulency Joe Biden’s decision to remain at Camp David was a smart one. One way to downplay a calamity is to not add to the drama with presidential appearances. The thinking being: Americans want out of Afghanistan. Let the country fall. Just make sure the embassy is evacuated.

Well, little did I know, this administration was so caught off guard by the Taliban, there are still thousands of American civilians trapped in a country overrun by Islamic terrorists, which is the equivalent of being stuck behind enemy lines during World War II with a Nazi takeover.

We have thousands of American civilians — civilians—  stuck in a country overrun by jihadists who hate us, the U.S. government has already admitted it has no idea when it can get them out, has already admitted it cannot protect them as they make their way to an airport where a flight might not be waiting for them, and the president of the United States, until late last night, was hiding out at Camp David.

What’s more, the messaging from the White House is in utter disarray. White House Press Secretary Lyin’ Ginger can’t even guarantee every American will make it out safely… And the president of the United States is hiding out at Camp David.

And when I say “hiding out,” that’s not hyperbole.

Biden was nowhere to be seen. He didn’t walk out of his Camp David retreat to take a few questions or make a statement. He’s still not releasing statements that say things like: Nothing will be left undone to ensure every American is evacuated safely. Biden isn’t doing anything. He’s hiding. Even today, back at the White House, he’s hiding. Thousands of Americans are stuck in a foreign country overrun by our mortal enemies, and their president’s gone AWOL for four full days.

And where’s her Vice Fraudulency Kamala Harris? There are rumors she’s keeping hours that would embarrass a banker, strolling into the office at, say, 9:30, 9:45…

When thousands of America are trapped behind enemy lines, Americans want to hear from their president. They want to know the man they hired to do the job is doing the job, is in control, is engaged, and is on top of things. They want to be reassured someone is in charge.

Never in the history of American politics have I seen a president disappear during a crisis like this, not with so many American lives at risk.

But I have seen this elsewhere…

In Russia, 1941, when Josef Stalin had a psychotic break.

In June of 1941, about an hour after Stalin went to bed and two years after signing a non-aggression pact with Hitler’s Germany, Hitler launched Operation Barbarossa, a full-fledged invasion of the Soviet Union.

Stalin was so shocked, so caught off guard, so unprepared, so humiliated, he fell completely apart, and for three full days, as the Nazis made historic advances, killed thousands, and drove towards Moscow, Stalin refused to do anything. He was completely out of touch as his country was ravaged. The reasons for his breakdown are obvious: every disastrous decision, every strategic and political mistake he’d made with Germany, had just come home to roost, and he had no idea what to do about it.

Eventually, Stalin got his act together and repelled the German invaders, but the cost to his country and tens of millions of Russians was almost unfathomable. Hopefully, that will not be the case here.

And now Biden’s up and disappeared, gone into hiding, gone AWOL… His administration is in utter disarray just like any government would be without someone in charge. 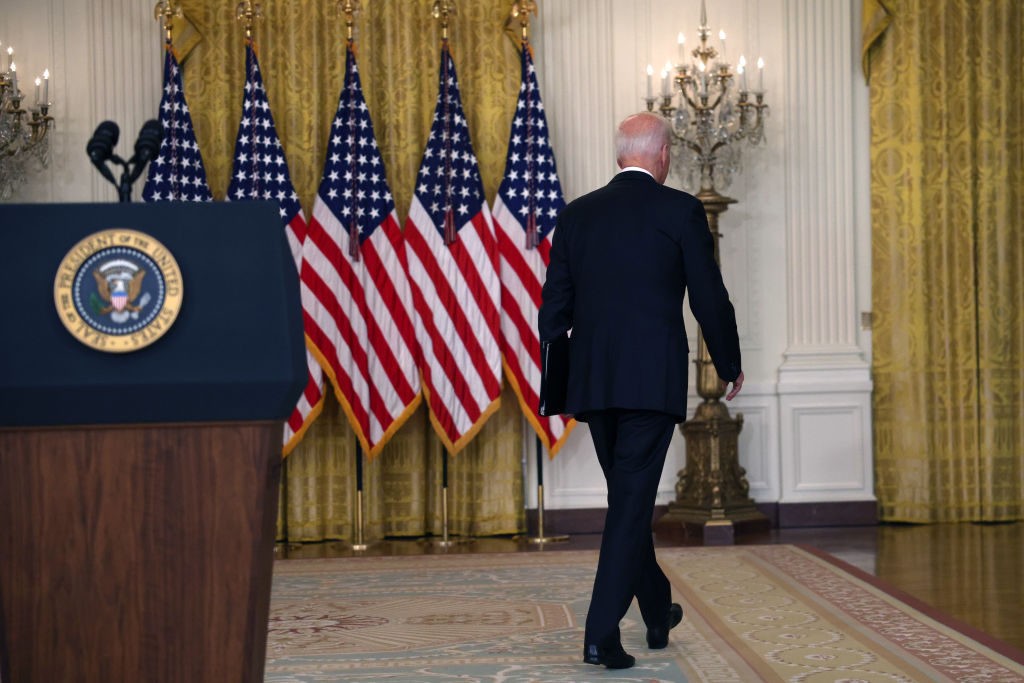 U.S. President Joe Biden walks away after refusing to take questions after delivering remarks on the worsening crisis in Afghanistan from the East Room of the White House August 16, 2021 in Washington, DC. (Anna Moneymaker/Getty Images)

We are entering the fifth day of the greatest foreign policy/human rights disaster in decades and the president of the United States is in hiding.

Thousands of Americans’ lives are at risk, and the president of the United States is hiding out, is incommunicado…

Something is seriously wrong with Joe Biden.