Vulnerable Democrat Rep. Kurt Schrader (OR) used his taxpayer-funded office to cover his habit of avoiding work and missing parts of the congressional calendar, while using ‘District Work’ periods to train horses for a cross country trip.

Over the last several months, which Susan has well documented, it appears that Kurt spent time in Maryland during district work week periods to prepare for his upcoming horseback riding trip. 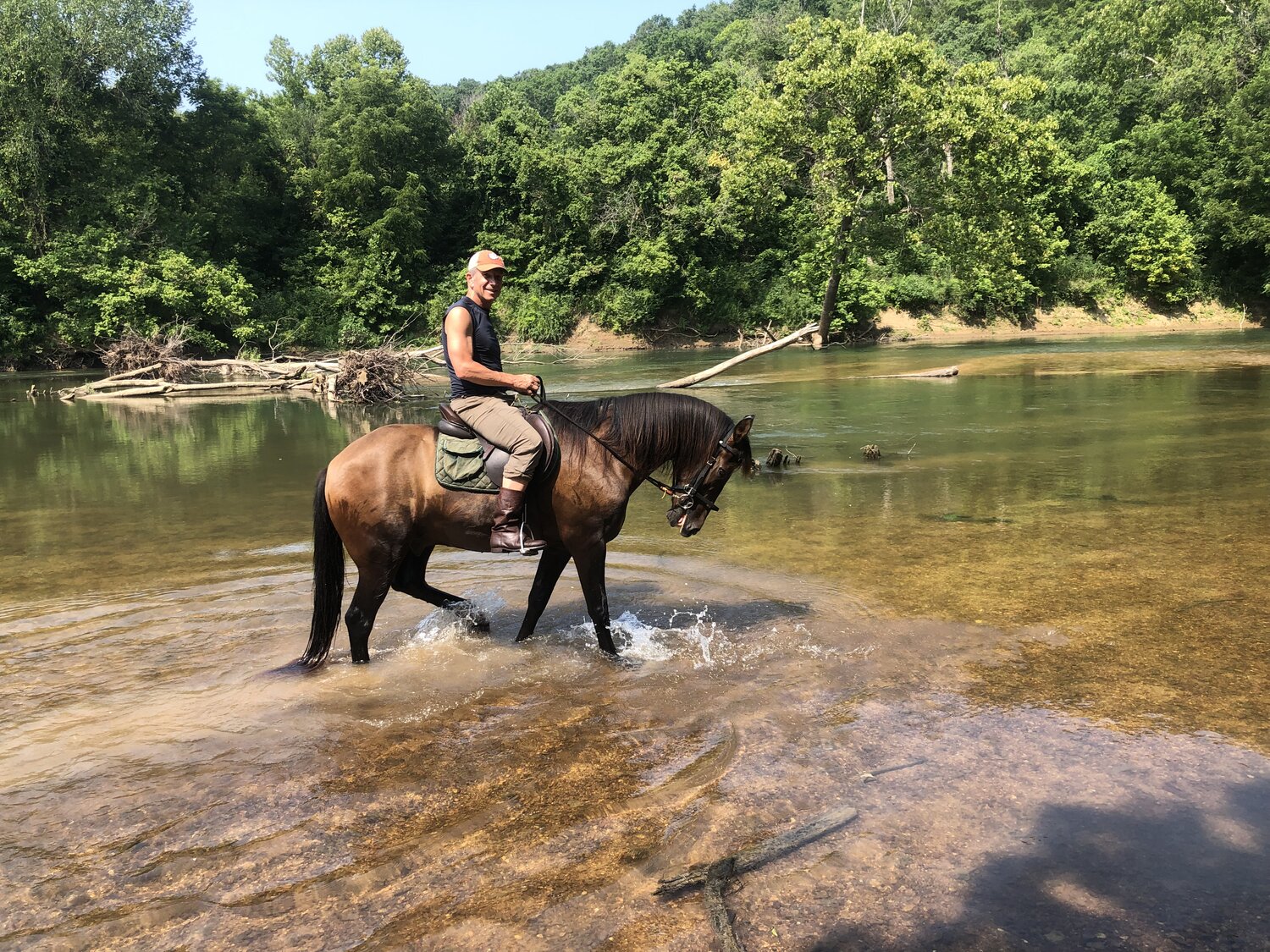 “Kurt taking Guillermo in for dip in the Meramec River.” (susanmoraschrader.com).

Since leaving, Hoyer and House Speaker Nancy Pelosi (D-CA) have decided to sacrifice vulnerable House members in order to have them come back to Washington, roughly a month early to advance their swampy partisan agenda items. Even though Kurt is not using the time to campaign, which most vulnerable members do, he said that he would prefer any big spending bill to be taken up in late fall or winter at the earliest, most likely so it will not disturb his plans.

Susan started a blog to document all the couple’s travels and show their progression of getting ready and training over various months when they decided to start their journey. Susan has been planning the cross country horse trip with Kurt for August since October of last year, inspired by another cross country trip the couple took to get a vehicle Kurt purchased in Maryland to his ‘home base’ in Oregon.

While Kurt is a representative for a district in Oregon, his wife is registered to vote in Clarksburg, Maryland. Susan has actually been registered there since March 1984 as a Democrat, according to the Maryland Board of Elections Voter Lookup page. Conveniently, she also has a residence in Clarksburg, Maryland, and takes a ‘primary residence’ tax credit, according to the Maryland Department of Taxation and Assessment. 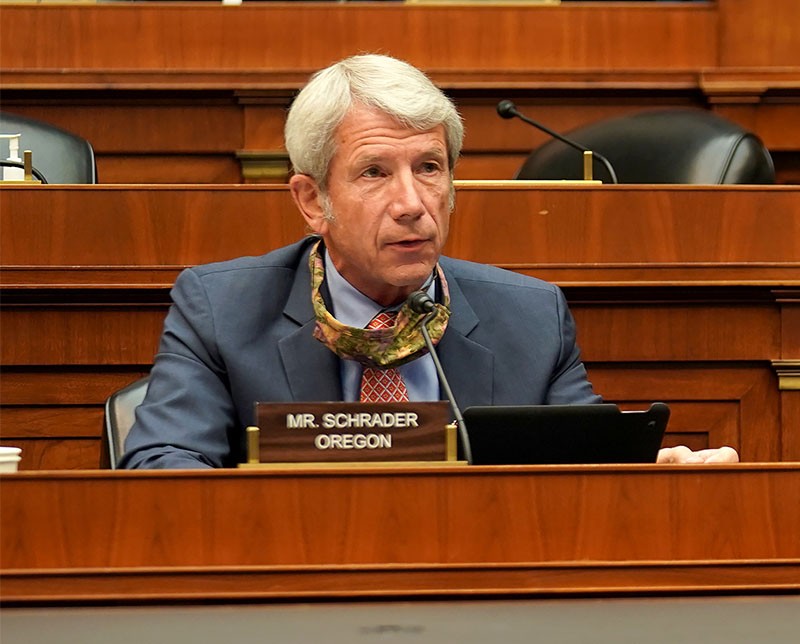 During the couple’s trip preparation, Susan would frequently update her blog about their trip plans and which route to take. However, she also included all of the time Kurt was doing a good job training, not working, as well as the times it was “unfortunate” he had to work in Oregon — at his job in the district he represents — instead of training the horses.

On April 14, 2021, Susan wrote on her blog that “over the past few weeks, Kurt has been doing a good job of coaxing Guillermo, his horse, into the trailer”:

To say we’ve had a bit of a setback would be an understatement. Over the past few weeks, Kurt has been doing a good job of coaxing Guillermo, his horse, into the trailer. At first, Guillermo resisted it. This was surprising given that he is bomb-proof on the trail and had already travelled to Maryland from California. But resist Guillermo did (in the form and highspeed backing) and persist Kurt did (with unexpected patience). In time, Guillermo came around and was willingly taking his meals in the white box on wheels. Unfortunately, Kurt has been in Oregon the past few weekends. [Emphasis added].

The House did not take any votes and instead was supposed to be in a District Work Period, from March 29 to April 12. Apparently, he was instead training his horses.

On the Fourth of July weekend, Kurt and Susan took a weekend trip to West Virginia. The couple left late on Friday morning when the House was not in session and was entering a District Work Period, which is when he is supposed to be in Oregon, meeting with constituents:

Our July 4th weekend trip to the beautiful Lost River State Park in West Virginia was no exception. We loaded up late Friday morning for the three-hour drive. By 2:00, we had the boys settled in their little pole corrals at Big Ridge Campgrounds  — each with a bucket of water and bulging hay bag — and left to check out our cozy little log cabin in the park. Everything was perfect and we were excited to get climbing the next day. [Emphasis added]. 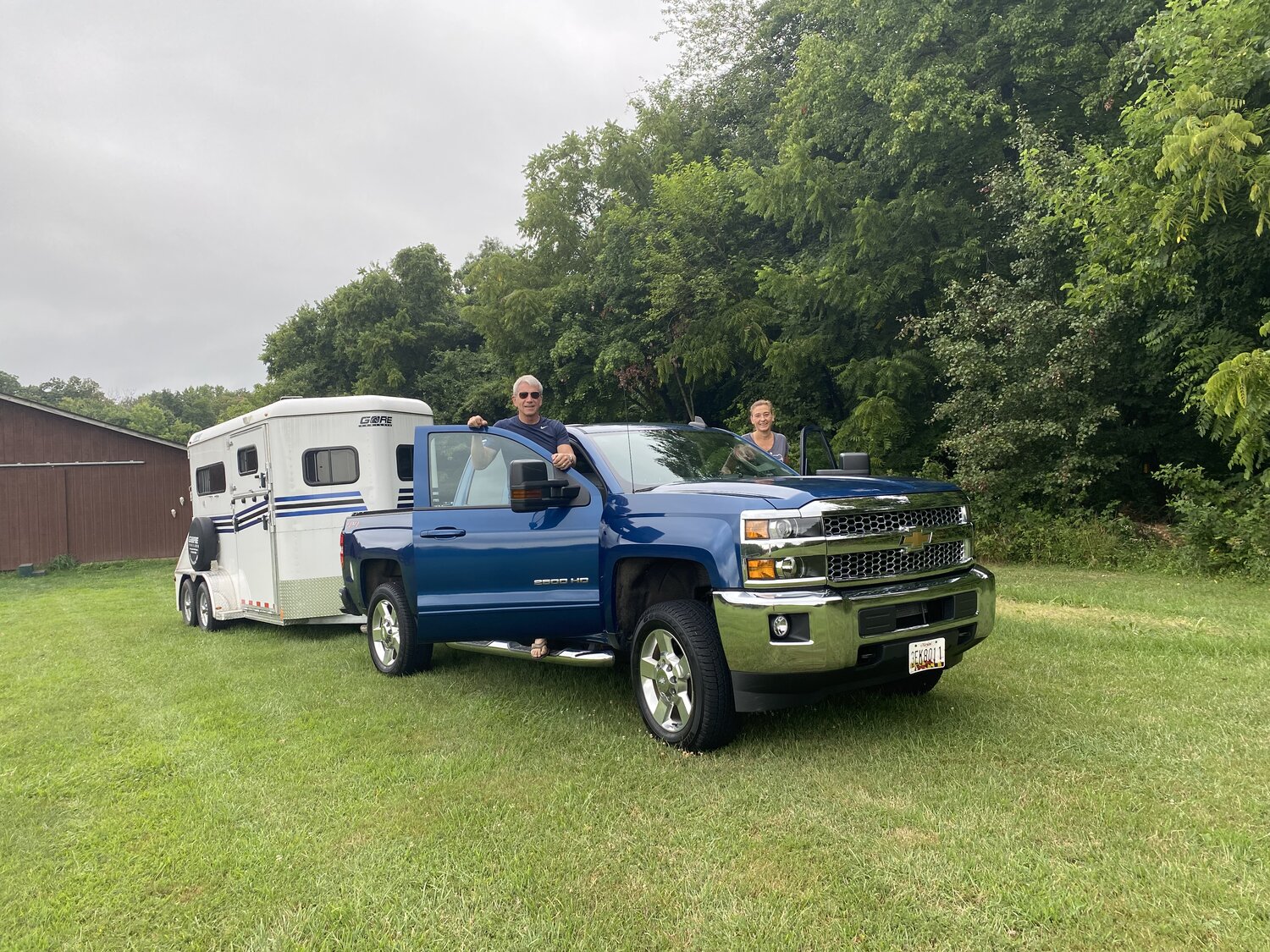 “Taking off from Clarksburg MD to land near Clarksburg, WV.” (susanmoraschrader.com).

The House was not in session on Friday, July 2, nor during the week that followed, which was a District Work Period, when he took his weekend trip.

However, on May 2, Susan admittedly wrote that on a Friday afternoon in late April, the two of them “hurried through conference calls and end of week reports” to get the “boys” loaded for their first “away trip.” Susan added that rushing to end the workweek worked out for them since there was traffic:

Friday afternoon, we hurried through conference calls and end of week reports to get the boys loaded and down Peach Tree Road by 3:00 for our first ‘away trip’ to a bed and barn in Hancock, Maryland.  Our rush was for not and we hit a major back up that had our first highway drive with the loaded trailer averaging about 15 miles per hour for the first 10 miles. [Emphasis added].

This “away trip” was likely from April 30 to May 2, when the House was in a Committee Work Week. During “committee workweeks,” lawmakers are home and hold hearings remotely, while the country was at the peak of the Chinese coronavirus, “Hoyer formalized the practice of ‘committee workweeks’ in which lawmakers were home and would hold hearings remotely,” the Washington Post reported. 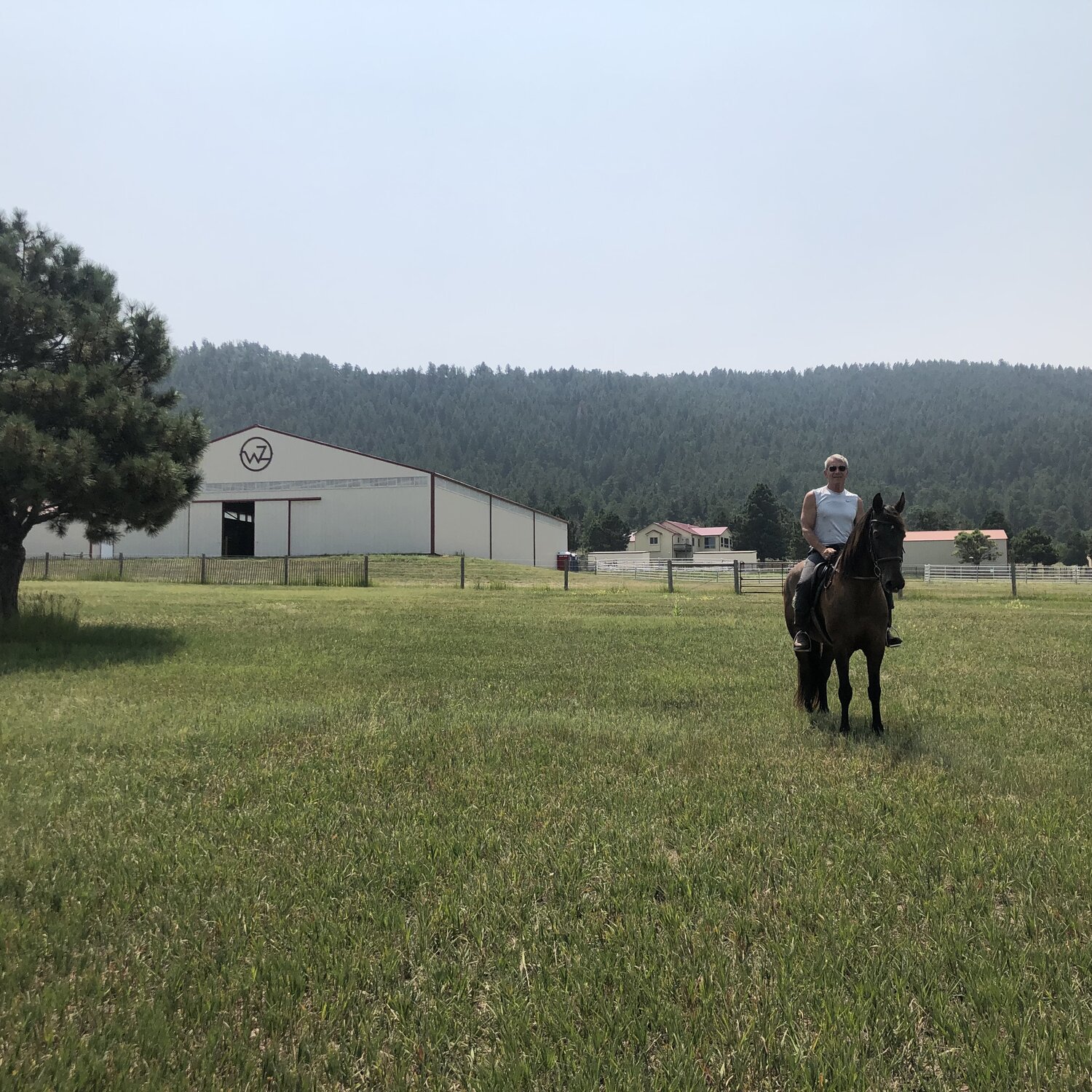 Breitbart News reported that Kurt’s taxpayer-funded congressional office, in August, sent a “Congressional Update” email to his constituents that included pictures from his time visiting constituents in July, over a month before he sent his August email. This happened while the couple was gallivanting across the country on their four-week-long horseback riding vacation.

After the news of Hoyer and Pelosi cutting the District Work period short by almost a month, Susan blogged on August 19, where she complained that “unfortunately” the congressman needs to go back to work, and the trip was cut short.

Our route wasn’t taking us directly to SLC but rather to the Heber Valley. Heber is known as a riding Mecca. It is also on the way toward Bear Lake, an area I’d really wanted to see from horseback. Unfortunately, Kurt will need to be back in Washington earlier than expected so, we’d had to cut a number of days from our itinerary. We’d shed a night camping at Fish Lake and we were losing our day on Bear Lake. Heber City was still a stop, but now it was just an overnight before a long haul to Idaho. [Emphasis added]. 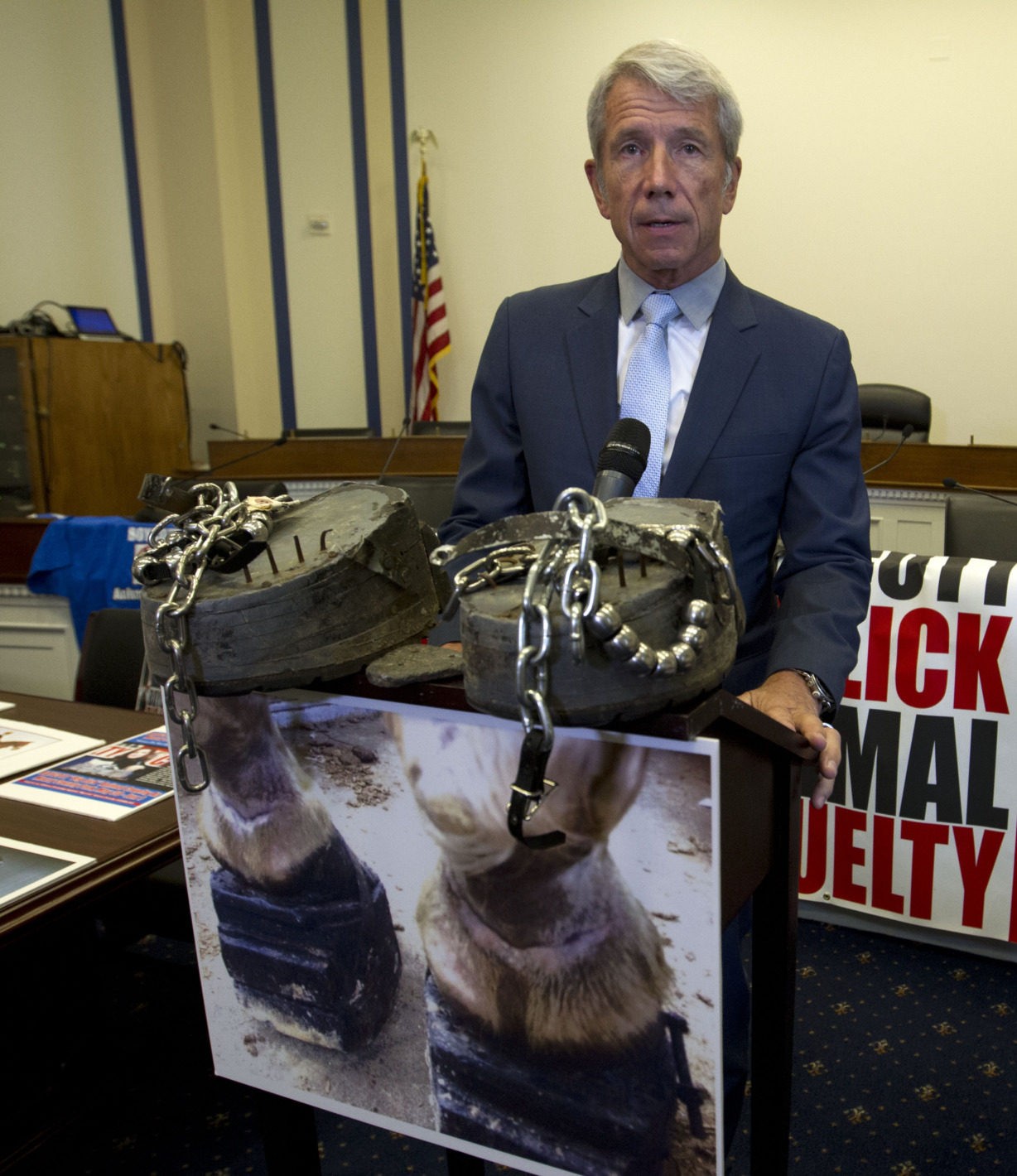 Rep. Kurt Schrader D-OR. speaks during a news conference, ahead of a House vote on a bill that would prevent Soring in training Tennessee Walking horses. (AP Photo/Jose Luis Magana).

However, this would not be the first time Kurt has tried to shrink his duties in elected office. In January 2017, Kurt skipped his swearing-in ceremony for his honeymoon with Susan, and it appeared the couple traveled to Argentina and rode horses. In addition, he also skipped the vote to elect the speaker of the house in 2017. Interestingly enough, Kurt was the only member to miss the 2017 swearing-in.

The congressman missed the first procedural vote in the 115th Congress and missed the four subsequent roll call votes because he was technically not a Member of Congress, as he had not yet been sworn into the new Congress. “He wasn’t listed as voting or not voting on the four subsequent roll call votes because, technically, he is not a member of the new Congress until he is officially sworn in,” USA Today reported.

According to ProPublica, the congressman has missed four percent (202) of the votes while in office and has only given an explanation for why he missed 13.9 percent (28 out of 202) of the ones he has missed.