Senate Majority Leader Chuck Schumer, the New York Democrat, was caught on camera dancing around outside with Stephen Colbert, the late-night talk show host, at the same time, thousands of Americans are trapped in Afghanistan with Afghan allies.

In a clip over 20 seconds long, Schumer is seen dancing with a mask on and Stephen Colbert. The clip was posted to Twitter on Saturday by New York City Mayor Bill de Blasio’s Press Secretary Bill Neidhardt:

A Real Clear Politics reporter said a congressional aide texted him saying, “would it kill anybody in Washington to at least pretend to give a fuck?”

Schumer, while it seems he is having a fun time dancing with the late-night talk show host, is not in Washington, DC, where he could be potentially looking for ways to get the stranded Americans and Afghan allies out of Afghanistan. Due to President Joe Biden’s botched troop withdrawal, the country is now conquered by the Taliban terrorists.

Reports show that the Taliban terrorists, since conquering Kabul, are surrounding the Hamid Karzai International Airport, attempting to take U.S. passports and even identification orders to prevent Afghan Americans from fleeing the country. 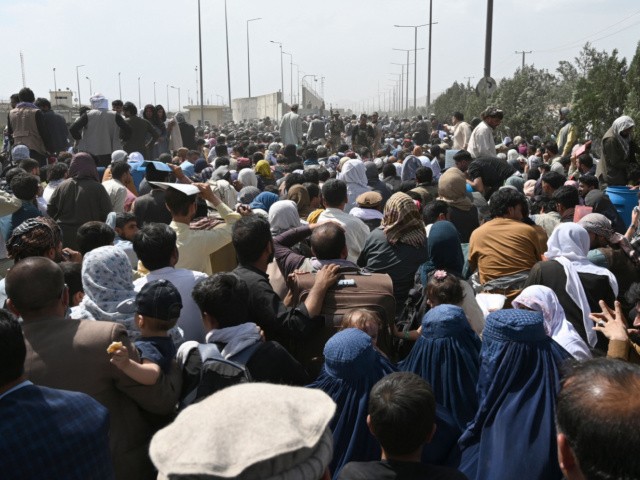 Afghans gather on a roadside near the military part of the airport in Kabul on August 20, 2021, hoping to flee from the country after the Taliban’s military takeover of Afghanistan. (Photo by Wakil Kohsar/AFP via Getty Images)

The United States has reportedly been sending back thousands of troops to Afghanistan to help with the quick evacuation of U.S. citizens, Afghan allies, and vulnerable Afghans.

Politico reported that the State Department under Biden has also been charging the stranded people to be evacuated from the airport in some cases up to $2,000:

Even though U.S. officials tell NatSec Daily and others that evacuation flights from Kabul will be free, people trying to catch a plane in the Afghan capital say differently. One person said State Department staff were seeking large payments — up to $2,000 — from American passengers and even more from non-U.S. citizens.

The report even noted that a spokesperson for the State Department did not deny the claims.