Sen. Rick Scott (R-FL) told President Biden in a letter on Wednesday that the United States must make it clear it will not withdraw U.S. forces from Afghanistan until Americans who remain stranded are evacuated. He presented a series of questions that the American people deserve answers to, requesting Biden offer his plans to hold the Taliban accountable over reports of the jihadist organization beating Americans near the Kabul airport.

“Over the past week, the world has watched as America was overwhelmed and humiliated in its failed mission to successfully withdraw U.S. forces and personnel from Afghanistan,” the National Republican Senatorial Committee (NRSC) chairman said in a letter on August 25 addressed to the president, describing the attempt as “disastrous.”

“There was always going to be a time for American forces to leave—but on our terms,” Scott said, emphasizing that the American people and U.S. military “deserve an unequivocal commitment that your administration will devote all military resources to ensure that every American is safely evacuated from Afghanistan as quickly as possible.”

“It must be clear that we will not withdraw American forces from Afghanistan until that mission is complete. This commitment must also be made to our allies and all who stood and fought beside us in Afghanistan,” he said, referencing Biden’s commitment to adhere to the Taliban’s August 31 deadline: 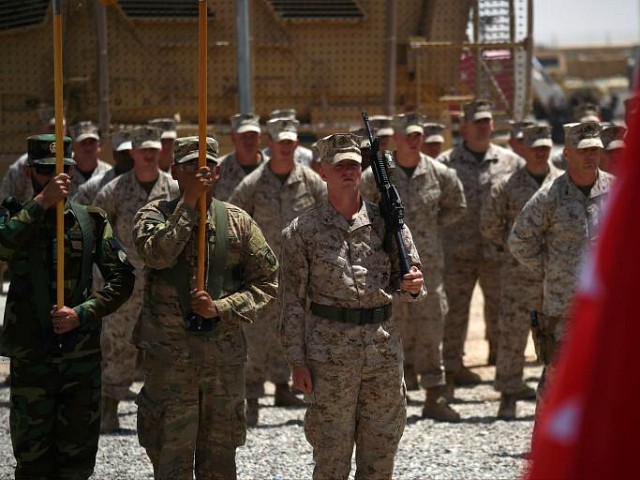 US Marines and Afghan National Army (ANA) soldiers carry flags during a handover ceremony at Leatherneck Camp in Lashkar Gah in the Afghan province of Helmand on April 29, 2017. US Marines returned to Afghanistan’s volatile Helmand April 29, where American troops faced heated fighting until NATO’s combat mission ended in 2014, as embattled Afghan security forces struggle to beat back the resurgent Taliban. The deployment of some 300 Marines to the poppy-growing southern province came one day after the militants announced the launch of their ‘spring offensive’, and as the Trump administration seeks to craft a new strategy in Afghanistan (Photo credit should read WAKIL KOHSAR/AFP/Getty Images).

Because the Biden administration “hastily forced an unnecessary deadline, leaving the safety and security of American citizens and billions of dollars in military assets in the hands of a rogue militia,” the Taliban “feels empowered to dictate the terms of our withdrawal, warning this week that there would be ‘consequences’ if the U.S. withdrawal was not complete by the August 31 deadline set by your administration,” Scott observed:

With the Taliban in power, Al-Qaeda, ISIS-K and other terrorist organizations know we have no plan, and no one will resist them. Over the course of one weekend, a clear message was sent by your administration: the United States is willing to abandon our people, our allies and our interests. With your August 31 deadline quickly approaching, we must know your plan to get Americans home.

While Scott said he is “gravely concerned” by Biden’s response to the crisis, he requested a “prompt” reply to a series of questions from the administration, even in a “classified setting if necessary.” 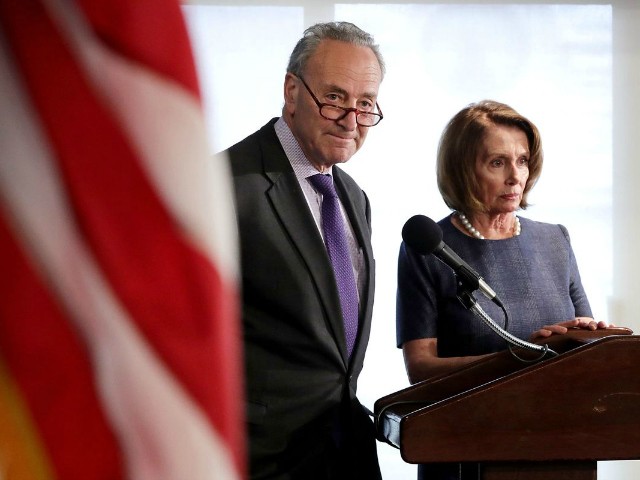 Senate Minority Leader Charles Schumer (D-NY) (L) and House Minority Leader Nancy Pelosi (D-CA) deliver a ‘prebuttal’ to President Donald Trump’s upcoming address to a joint session of Congress at the National Press Club February 27, 2017 in Washington, DC. Trump has been invited by Speaker of the House Paul Ryan (R-WI) to deliver a speech Tuesday on the floor of the House of Representatives (Photo by Chip Somodevilla/Getty Images).

On Wednesday, the State Department report indicated that at least 4,100 American citizens remain stranded in Afghanistan.