“Time and time again, President Biden has shown the strength of a marshmallow and the intellectual capacity and judgment of a gnat,” Brooks wrote in a press release. “America, and the free world, simply cannot afford the risks of such a vacuous man in the office of President of the United States”: 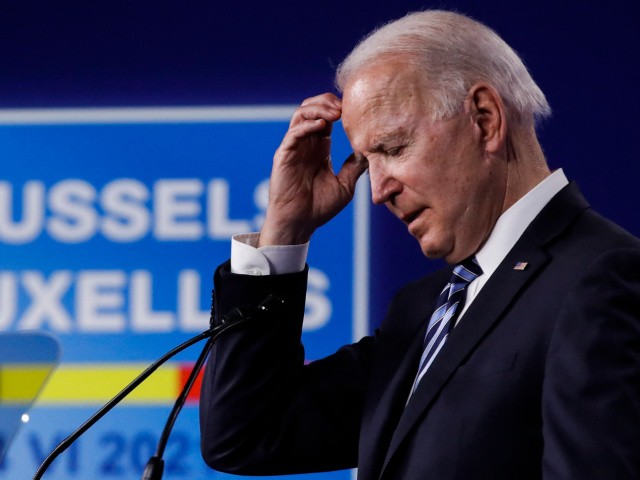 US President Joe Biden speaks during a press conference after the NATO summit at the North Atlantic Treaty Organization (NATO) headquarters in Brussels, on June 14, 2021 (Photo by OLIVIER HOSLET/POOL/AFP via Getty Images).

“President Joe Biden has proven himself to be a complete and total fiasco. The horror of dead American military personnel giving their lives in defense of a botched Afghanistan withdrawal is Joe Biden’s pinnacle of incompetence,” Brooks continued before demanding his resignation.

“As such, President Biden should, in the name of honor, resign as President of the United States. America needs a President who shows strength and competence in the face of dictatorial geopolitical adversaries,” Brooks said.

The number of elected Republicans calling for Biden’s resignation has risen to 28, as Rep. Jackie Walorski (R-ID) joined Brooks on Friday.

“As the president has said repeatedly, the buck stops with him – and I agree. The buck must stop here. President Biden has demonstrated that he is unfit to serve as commander-in-chief, and, therefore, must resign,” she stated in a press release.