Several members of the U.S. military are expressing their grave concerns as the Pentagon issues a coronavirus vaccine mandate on U.S. servicemembers, warning the mandate could majorly impact military readiness as many other military members, they say, feel the same way but are not speaking out for fears of consequences.

Rep. Thomas Massie (R-KY), who introduced HR 3860, a bill to prohibit “any requirement that a member of the Armed Forces receive a vaccination against COVID-19,” in June, held a conference call with members of the military Friday, where they offered their perspectives and concerns moving forward as the government imposes this mandate, on the condition of anonymity.

Regarding Vaccine Mandates:
“Representative Massie moderated a conference call that included a dozen armed service members, with experience ranging from a first-year Air Force Academy cadet to a Major with 17 years of service, including combat experience.”https://t.co/9efDVcEwDp

“There was a lot of indirect pressure to be vaccinated before it was even mandatory. And that’s coming from our peers and especially during our basic training where … the people in charge of us were always making like indirect comments,” a cadet at the Air Force Academy said, adding there is “always an underlying kind of bias if we weren’t [vaccinated],” which she described as “frustrating.”

“We get a lot of pressure from our commanders … and they tell you these sob stories to heavily persuade you, and it’s borderline harassment,” one Air Force member added, explaining how he may need to “restart” if the vaccine becomes mandatory.

“It makes you wonder, well I joined to change my life and they’re all about inclusion and diversity but I have to restart just because of the shot,” he said.

While he is in the process of getting an exemption, if it does not pan out, he explicitly said he will leave.

“I’m not getting that shot,” he said.

Another active Air Force member expressed concern over the coronavirus narratives offered by the establishment media and said he has served for five years but will leave if he cannot get an exemption. That could result in a dishonorable discharge, he said, adding “you truly don’t know what the situation would be.”

“That’s basically putting us in the same category as rapists and killers which I think that’s insane,” he said of the possibility of getting a dishonorable discharge, noting that it makes one “basically a felon at that point.”

“They’re basically saying we’re felons, which I think is crazy,” he added.

A captain in the U.S. Army was also among those telling their stories and explained how he, a Christian, attempted to get a religious accommodation request in December 2020, which the Surgeon General of U.S. Army denied without a reason or route of appeal.

He said he has been mistreated and the process has affected him mentally, emotionally, and spiritually. But ultimately, he said the only opinion that matters to him is the Lord’s, reading off scripture as part of his defense for not getting the vaccine and citing the use of fetal cell lines in vaccine development — an issue primarily associated with the single dose Johnson & Johnson vaccine which was produced with a fetal cell line, although fetal cells were only used in the development and testing phases of the Moderna and Pfizer vaccines.

The U.S. Army Captain assured that he will not stop fighting for “my fellow patriots who love the Lord as I do” and is willing to take his case to federal court and even the Supreme Court, if it comes to that.

Another individual, identified as a  17-year active servicemember who has toured in Afghanistan and Iraq, took a different angle, explaining how he has a medical condition involving his heart. He said he “absolutely cannot risk any vaccines” given his condition.

“It is not a one size fits all blanket solution ad it should not be enforced as such. … All servicemembers should be given the right to waive and decline the vaccine,” he said, warning that the mandates could serve as a “death blow” to military readiness.

Another military member, identified as a senior captain in the Air Force and a combat vet, revealed how he has tried to get a religious exemption for the mask mandate, as he says the narrative that it protects people and is in no way harmful is a violation to 9th commandment to not bear false witness against one’s neighbor. A mask, he said, serves as symbolic and tacit approval of that false narrative “and one I’m not willing to do.”

His appeals have gone up since February, but he has been denied and has ultimately faced consequences for his decision to refuse to wear a mask — effectively being fired as flight commander —  which serves as one example of how the mandates are going to impact national security and military readiness, he explained.

He said people appear to be motivated by fear of the next higher up, but he explained he has chosen to fear God over men and reject the narrative of deception.

Our bill, HR 3860, prevents federal funds from being used to require a member of the Armed Forces to receive a COVID-19 vaccine. The CDC has issued new warnings about the risk of heart inflammation developing in some recipients of the shots. pic.twitter.com/offU1FKcAu

Another military member, a specialist in the Kentucky Army Nation Guard, added that he will not be satisfied with a religious vaccine exemption alone.

“I want this gross overreach of power and authority to be stopped so no one has to fight for personal freedoms,” he said, noting rights are being trampled. He said he will not get it regardless of the circumstances.

The military members told reporters that about one-third to one-half of the people around them are not vaccinated, flying in the face of the corporate media’s narrative of the vast majority of the military receiving the shot. When asked by Breitbart News if they believe there are many others who feel the same way they do but are not speaking out due to fear of repercussions, they said they absolutely believe that to be the case.

“Yes. Especially being part-time guard unit where we do one weekend a month kind of deal, most everyone I speak with and affiliate with at the unit … there are very few who do not share my sentiment or position on the matter,” one of the military members said, adding he represents the community in his unit.

One said there is a “significant volume” of others sharing his concerns, and another said younger men, specifically those coming “straight out of technology in training,” are still “scared to say something right now to their leadership.” 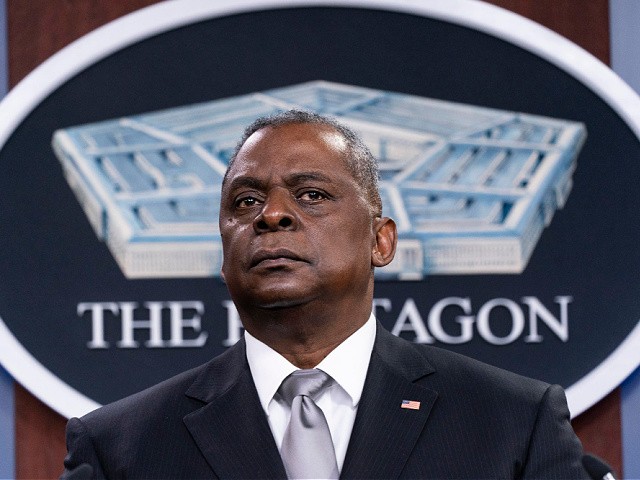 Secretary of Defense Lloyd Austin listens to a question as he speaks during a media briefing at the Pentagon in Washington. (AP Photo/Alex Brandon)

“Many people in the military don’t know their rights.  They’re told when they enter basically they that you give up your First Amendment rights, things just don’t belong to you, you support and defend it but you get to exercise them,” another military member added, explaining that some do not think they have the resources, nor do they know about the options for religious accommodations or medical exemptions.

“And they’re afraid to ask the questions,” he added.

This week, following the FDA’s approval of Pfizer’s vaccine, the Pentagon officially mandated that U.S military service members get the vaccine.

“To defend this Nation, we need a healthy and ready force,” Defense Secretary Lloyd Austin wrote in a Wednesday memo.

“After careful consultation with medical experts and military leadership, and with the support of the President, I have determined that mandatory vaccination against coronavirus disease 2019 (COVID-19) is necessary to protect the Force and defend the American people,” he added, directing “the Secretaries of the Military Departments to immediately begin full vaccination of all members of the Armed Forces under DoD authority on active duty or in the Ready Reserve, including the National Guard, who are not fully vaccinated against COVID-19.”